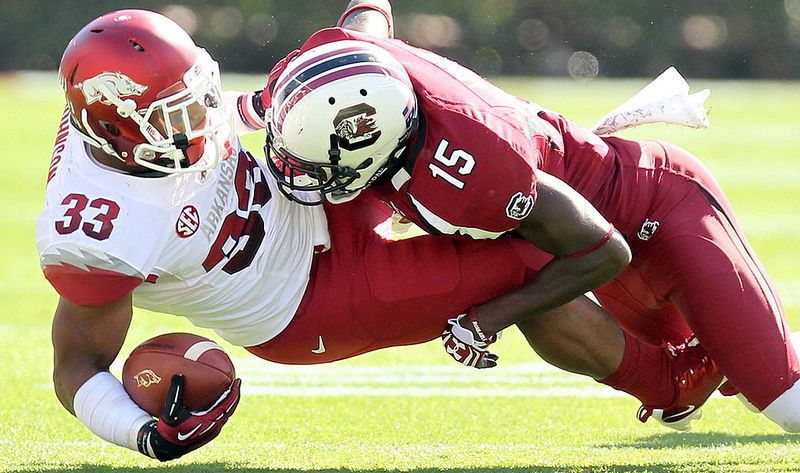 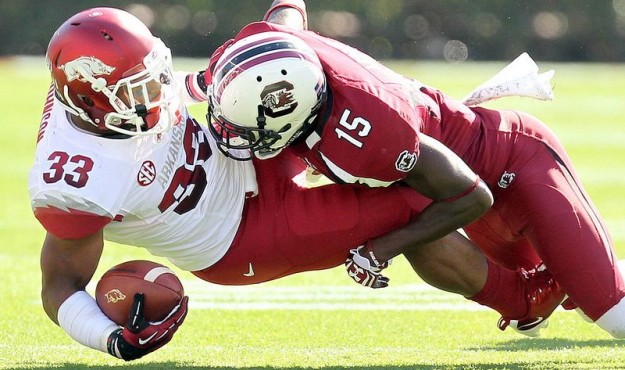 SOUTH CAROLINA FINALLY GETS A WIN AGAINST ARKANSAS

The University of South Carolina football team ended three years of frustration against the Arkansas Razorbacks on Saturday – notching a 38-20 win over a program that had given head coach Steve Spurrier’s squad fits in recent years.

In the process, Spurrier’s Gamecocks matched a school record with their sixth SEC win of year – equalling last season’s record-setting mark.  In fact South Carolina has now gone 17-7 against SEC opponents over the last three seasons after posting an abysmal 54-85 mark through its first eighteen years in the conference.

The No. 8 Gamecocks (8-2, 6-2 SEC) also won for the first time this season without All-American running back Marcus Lattimore, who suffered a horrific knee injury during USC’s 38-35 victory over Tennessee two weeks ago.  In Lattimore’s absence, freshman Mike Davis and fifth-year senior Kenny Miles shared the rushing load – combining for 90 yards on 27 carries. Meanwhile quarterback Connor Shaw – who won SEC Offensive Player of the Week against Tennessee – completed 14 of 22 passes for 279 yards with two touchdowns and one interception.

He also ran for a 1o-yard score. 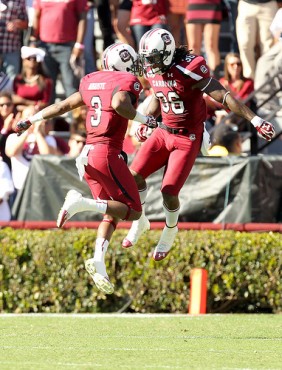 The win moved Shaw to 15-3 as a starter – while the Gamecocks moved to 6-1 over the last two years in games played without Lattimore, who underwent surgery on his right knee last week.

Last year Arkansas humiliated the Gamecocks 44-28 on a cold, blustery night in Fayetteville.  Two years ago, USC was shellshocked at home by the Razorbacks 41-20.

Not this time, though … as the Gamecocks reeled off their tenth consecutive home victory in front of 78,772 fans at Williams-Brice Stadium.

Arkansas did its best to keep the game close in the first half – but a pair of second quarter drives deep into South Carolina territory failed to produce touchdowns for the Razorbacks.  On the first drive Arkansas running back Dennis Johnson fumbled at the USC five-yard line, while later in the quarter USC defensive back Akeem Auguste broke up a pass in the end zone to force the Razorbacks to settle for a field goal.

That preserved USC’s 14-10 lead, and on the Gamecocks’ ensuing possession Shaw hit wide receiver Bruce Ellington for a 42-yard touchdown strike on a critical fourth down play – putting South Carolina ahead 21-10.

Ellington finished the game with five catches for a career-high 104 yards – his second straight 100-yard game.  The two-sport star – who is also a point guard on the USC basketball team – wasn’t the only Gamecock receiver to shine against the Hogs’ porous secondary.

Tight end Justice Cunningham made an absolutely gorgeous over-the-shoulder grab early in the first quarter – laying out to haul in an overthrown floater from Shaw.  That 26-yard gain converted a third-and-fourteen play – and four plays later Shaw hit tight end Jerrell Adams for a 29-yard score (the talented freshman’s first touchdown as a Gamecock).

USC converted seven of thirteen third down plays in addition to its big fourth down score.  Meanwhile Arkansas was held to just 4 of 12 third down conversions and failed on its only fourth down attempt.

While the passing game stole the show, Davis and Miles played exceedingly well in Lattimore’s absence.   In fact Miles threw a Lattimore-like block that sprung Shaw for a ten-yard touchdown run in the first half – breaking a 7-7 tie.

The Gamecock defense – which was scorched for 472 yards and 35 points by Tennessee – had a much better outing this week against the SEC’s top quarterback, Tyler Wilson.

Wilson completed 26 of 41 passes for 277 yards and two touchdowns.  He was also picked off twice, though – including a third quarter interception that USC defensive back D.J. Swearinger took back 69 yards for a backbreaking touchdown.

Swearinger heaved the ball into the crowd following his score – drawing a personal foul penalty on a third straight play (on the previous two plays he was called for a horse collar tackle and a helmet-to-helmet hit that will likely result in him missing next week’s game against Wofford).

In addition to its three takeaways, USC also got steady pressure on Wilson – with sophomore sensation Jadeveon Clowney registering one of three USC sacks.

Arkansas (4-6, 2-4 SEC) continued to struggle after starting the season ranked No. 10 in both the Associated Press and USA Today/ Coaches’ polls (one spot behind the Gamecocks).  Back in April, the school fired Bobby Petrino after the 51-year-old head coach failed to disclose an inappropriate relationship with a subordinate within the school’s athletics department.  Petrino’s teams won 21 games in 2010 and 2011 – and finished last season ranked No. 5 in the nation.

Clearly his absence is being felt.

Ironically, Petrino’s mistress – 25-year-old Jessica Dorel – recently moved to Columbia, S.C. along with her fiance Josh Morgan, who accepted a job with the USC swimming and diving program.