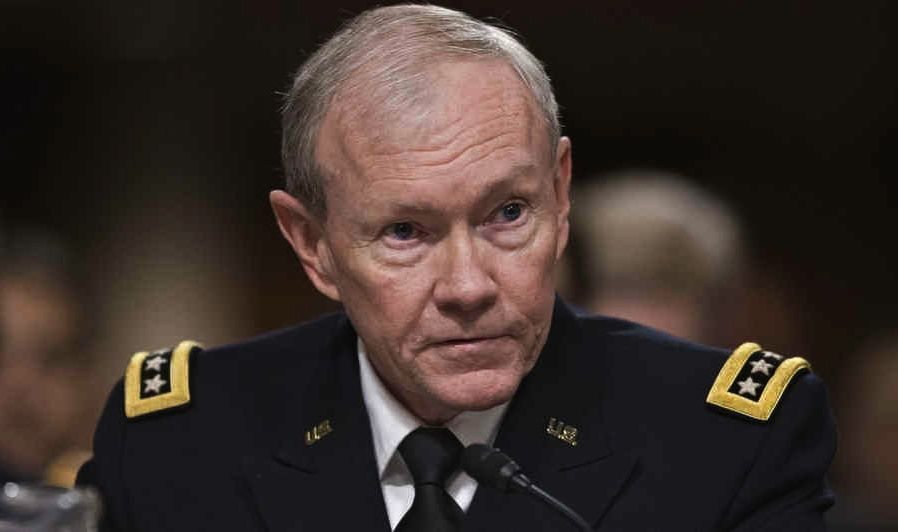 “I’ll listen to the generals …”

If you had a nickel for every time a politician said that, then you’d have a lot of nickels – maybe even $1.5 billion worth of nickels, which would be enough to establish a no-fly zone over Syria (and operate it for one month). Want to run the no-fly zone for another month?

That’ll cost you another $1 billion … and so on.

These figures come courtesy of General Martin Dempsey – the chairman of the American military’s joint chiefs of staff. For more than a year Dempsey has been dispassionately providing the administration of Barack Obama and members of the U.S. Congress with sobering information regarding the risks associated with American involvement in the Syrian civil war.

“It’s not about: can we do it? It’s: Should we do it, and what are the opportunity costs?” Dempsey told U.S. Senators last March, when the war drums were still a long way off in the distance.

More recently, Dempsey has spelled out in common sense language the dangers associated with even a limited strike against the regime of Syrian president Bashar al-Assad.

“We have learned from the past ten years … that it is not enough to simply alter the balance of military power without careful consideration of what is necessary in order to preserve a functioning state,” Dempsey wrote to U.S. Sen. Carl Levin (D-Michigan) in July. “We must anticipate and be prepared for the unintended consequences of our action. Should the (Assad) regime’s institutions collapse in the absence of a viable opposition, we could inadvertently empower extremists or unleash the very chemical weapons we seek to control.”

Exactly … in fact that point is especially critical in light of the extent to which al-Qaeda is involved in the Syrian conflict.

“Once we take action, we should be prepared for what comes next,” Dempsey added in his letter. “Deeper involvement is hard to avoid.”

Dempsey has also advised Obama to act “in concert with our allies and partners,” which is especially notable in light of Great Britain’s decision to stay out of Syria.

We agree … which is why this website has repeatedly argued against American involvement in this conflict (see here, here, here and here).

Unfortunately Obama – and “Republican” warmongers like U.S. Senators John McCain and Lindsey Graham – aren’t listening to Dempsey. Or to the American people, for that matter.

The Arab League wants action against Syria. The OPEC countries have plenty of money to fight a war. Why not let them do it?

The final
resolution passed by an Arab League meeting in Cairo urged the United
Nations and international community to “take the deterrent and necessary
measures against the culprits of this crime that the Syrian regime
bears responsibility for”.

The League foreign ministers also said those responsible for the attack should face trial, as other “war criminals” have.

Of course OPEC nations want some action against Syria, and it has nothing to do with so-called crimes. Have you missed the prices on the pump inching up due to the “instability” in the Middle East? Yep, another conflict fattens their wallets even more while we continue to accrue more debt.

Attack Syria, they use their nuclear weapons to wipe out tens of thousands of Americans. It is plain and simple as that.
Our government is rogue, lawless, and totally corrupt and completely out of control. The American people must rise up and go to battle with these demons in DC. Even over half the US military is against these fucked up sick monsters in DC.

“Rogue, lawless, and totally corrupt and completely out of control.” Yep. Jean Toal has this part down pat. She’s ready to move to the US Supreme Court if what you say is true.

What does SC-1 Congressional Representative, former Governor, man with military background and his foreign relations credentials, and his national security clearance have to say? I hear silence.

Sanford has no military background? His service in the Air Force Reserve was a complete and utter sham. He used it to puff himself up and gain a few extra votes during an election, but when called to serve, ducked out.

General Dempsey’s comments on Syria:
“Syria today is not about choosing between two sides but rather about choosing one among many sides…It is my belief that the side we choose must be ready to promote their interests and ours when the balance shifts in their favor. Today, they are not.”

“I don’t think at this point I can see a military option that would create an understandable outcome. And until I do, it would be my advice to proceed cautiously.”

“Senator, I am in favor of building a moderate opposition and supporting it,” Dempsey said on Thursday. “The question whether to support it with direct kinetic strikes … is a decision for our elected officials, not for the senior military leader of the nation”

If it was up to McCain we would be fighting in about 6 wars by now. As he pushes for American involvement putting our treasure and children in harms way, he plays a poker game on his phone. Senile and dangerous are 2 words that come to mind when it comes to this washed up politician, with Nancy Graham following close behind. (pardon the pun)

I am torn on the right answer in Syria. I understand wanting to deter WMD attacks and make tyrants fear the repercussions of using them, and I would not want anyone to vote against the authorization for the politics of opposing to Obama (although his decision to send it to Congress is cravenly political when he adamantly insists he does not need authorization and the required delay obviously hurts his argument for an imminent national security threat). National security should end at the water’s edge. But there must still be some legitimate national security interest to be achieved. And Obama has so poorly bungled the response in just about every way imaginable (the delays that embolden Assad, show our lack of commitment, and allow him to hide material or put innocents in the line of fire, the preemptive talk about how long the attacks would last, which just show there is no actual objective other than avoiding embarrassment for Obama from his redline talk, etc.) I wonder if any positive outcome can come from involving ourselves in this civil war. I am not much of an internationalist and have little faith in the UN, but I think if I were in Congress I would say that the UN should take the lead, since the only interest to be vindicated is the general principle about WMD rather than a specific US interest.

Well, now that Obama won’t even stand behind his own red line, I don’t know how a Congressman could in good conscience vote for a war with no clear objective or clear moral imperative. If I were in Congress I would definitely respond to the President that if it is the international community’s red line, then let the international community respond in Syria through the UN.