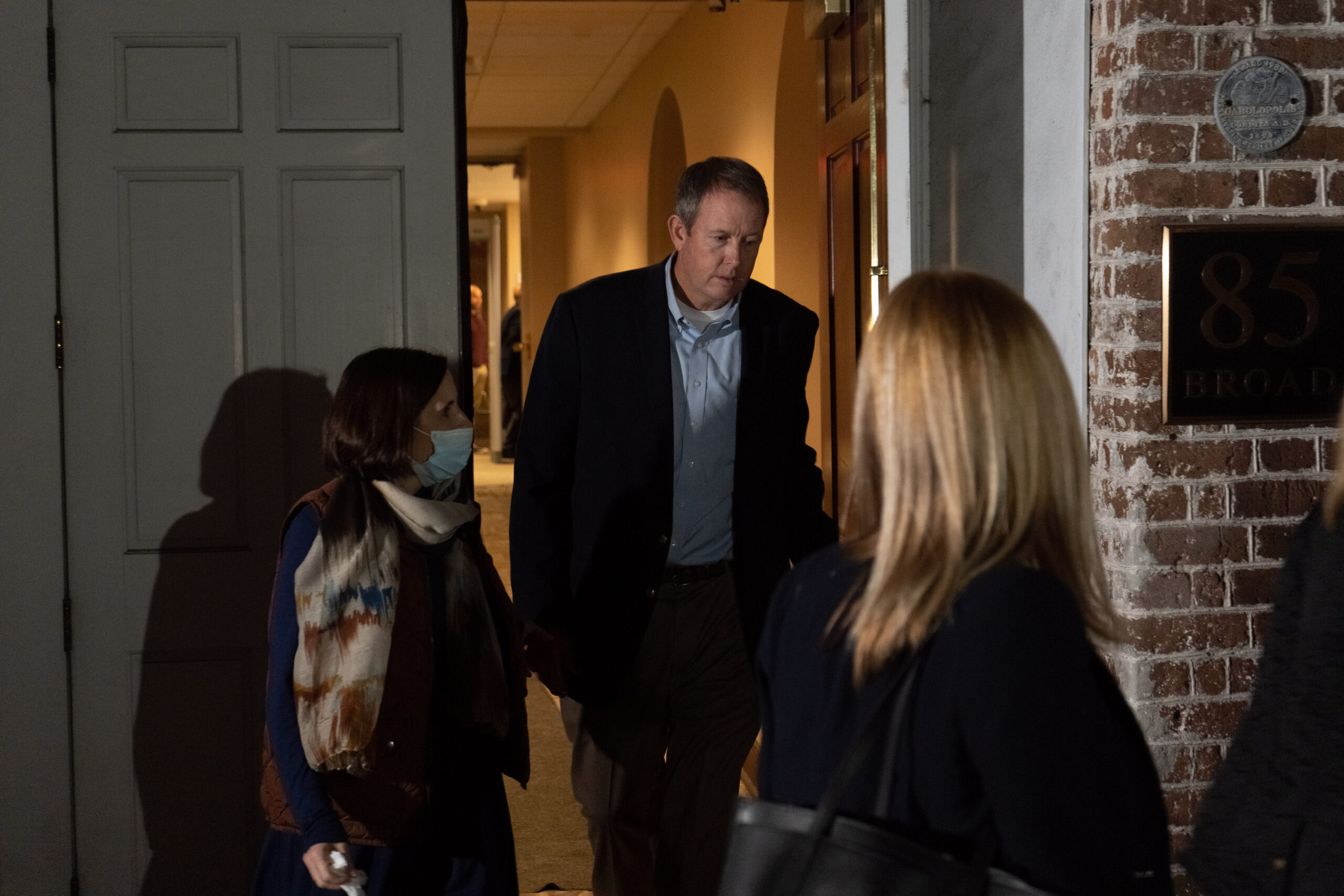 A jury in Charleston, South Carolina found disgraced banker Russell Laffitte guilty on each of the six criminal counts he was charged with in the first trial tied to the ‘Murdaugh Murders’ crime and corruption saga.

Laffitte was found guilty of conspiracy, wire fraud, bank fraud as well as guilty of three counts of misapplying bank funds. He faces up to thirty years in prison and millions of dollars in fines in connection with those convictions. For more on the potential prison time Laffitte is facing – and the process by which his sentence will be eventually be determined – click here.

Laffitte left the courtroom a free man – for now – after U.S. district court judge Richard Gergel declined to modify the bond conditions which were set for him before the trial. There had been considerable speculation as to whether Gergel would remand Laffitte to the custody of the federal government pending his sentencing hearing.

He declined to do so …

The jury’s verdict – announced at around 9:30 p.m. EST – came after nearly eleven hours of deliberation. It didn’t come easily, either. Two jurors were excused from duty for medical reasons – one of them claiming to have been on the receiving end of pressure from their peers on the panel. It is not immediately clear whether the disruption in the jury process could be grounds for an appeal, as defense attorneys could potentially argue the dismissal of the so-called “rogue juror” violated Laffitte’s constitutional rights.

For a guilty verdict, all jurors must be unanimous.


Laffitte’s attorneys Matt Austin and Bart Daniel objected to the replacement of one of the jurors just prior to the reading of the verdict, likely setting the stage for an appeal.

The jury drama marred what was an absolute tour de force from the prosecutorial team representing the office of U.S. attorney Adair Ford Boroughs. Led by assistant U.S. attorneys Emily Limehouse and Winston Holliday, federal prosecutors methodically, meticulously made a compelling case against Laffitte on each of the six charges filed against him – introducing damning documents and eliciting incriminating testimony not only from government witnesses, but also many of the witnesses called to the stand on Laffitte’s behalf.

The sheer volume of evidence and testimony left little doubt as to the outcome of the trial – but Limehouse acknowledged that even she had her doubts as jury deliberations dragged on into the evening hours on Tuesday.

“Jurors are people – we’re all humans – that’s why our system is as great as it is,” Limehouse told reporters following the announcement of the verdict. “We’re glad they came back with the verdict that we believe the evidence demanded – which was guilty on all counts.”

Limehouse (above) thanked jurors, victims and federal and state law enforcement partners following the announcement of the verdict.

Laffitte, 51, of Hampton, S.C., is the former chief executive officer of Palmetto State Bank (PSB). He was fired from his post at the financial institution in January as his role in a myriad of scams tied to disbarred attorney/ accused killer Alex Murdaugh began to become clear. In addition to the federal charges he was found guilty of on Tuesday, there are still numerous Murdaugh-related state charges pending against Laffitte.

Prior to the trial, Laffitte had reached an agreement with the federal government to testify in future prosecutions related to this ongoing investigation. That deal collapsed, though, when Laffitte balked at the estimated 4-5 years in prison prosecutors were insisting upon, according to my sources.

Laffitte did make some headway in proving he was not the only one responsible for many of these financial decisions – painting the outlines of a “broader conspiracy” defense which drew so much ink prior to the trial. But his attorneys were limited in their ability to cast blame beyond their client – and prosecutors argued (effectively) that many of the actions of “co-conspirators” were in response to Laffitte’s deceptive actions.

Also, there was always going to be a fundamental problem with the “broader conspiracy” line of defense … namely its failure to explain or excuse Laffitte’s conduct.

No broader conspiracy was going to paint Laffitte as the “pawn” he claimed to be.

Over the course of the trial, jurors were bombarded with checks, bank statements, wire transfers and other documents detailing Laffitte’s pivotal role in Murdaugh’s scams. They also heard from a litany of witnesses – many of whom were Laffitte’s family members – detailing the duplicity behind the dollars.

Among the devious denominations which led to his conviction?

In addition to notching the first Murdaugh-related conviction, the Laffitte trial also gave state prosecutors significant ammunition to use in their upcoming murder trial against Alex Murdaugh.

As previously reported, lead prosecutor Limehouse dropped a bombshell on the proceedings when she claimed Murdaugh was confronted by a PMPED employee about financial irregularities involving one of his client’s accounts on June 7, 2021. According to state prosecutors, later that evening Murdaugh savagely dispatched his late wife and younger son, 22-year-old Paul Murdaugh at the family’s 1,700-acre hunting property on the Salkehatchie River.

Jeanne Seckinger, chief financial officer at Murdaugh firm, testified under oath that she asked Murdaugh for “proof” of where the money from the case was. Murdaugh claimed the money was in another attorney’s trust account. Then he received a phone call informing him his father was in hospice and “abruptly end(ed) the conversation,” she said.


Later in the trial, Russell Laffitte’s brother – Charles Laffitte III – testified Alex Murdaugh told him he was having trouble getting Maggie Murdaugh to agree to an appraisal date for their jointly owned Edisto Beach, S.C. property.

Maggie Murdaugh was living at this home in the months leading up to her murder, and owned a “one-half, undivided fee-simple interest” in the property, according to county tax records. This is a potentially significant development as it could point to another motive for Alex Murdaugh to kill his wife – whom sources have previously told this news outlet was “lured” to the family compound by her husband on the night of her murder.

Murdaugh is scheduled to stand trial for the murder of his wife and son in Walterboro, S.C. beginning on January 23, 2023. That prosecution is being led by Creighton Waters, who is the chief attorney for the statewide grand jury section of the office of S.C. attorney general Alan Wilson.

Director of special projects Dylan Nolan and research director Jenn Wood contributed to this report. In fact, they did much more than that. Nolan and Wood have been the heart and soul of our coverage of the Laffitte trial over the past two-and-a-half weeks – a continuation of their indispensable roles in our content creation process.