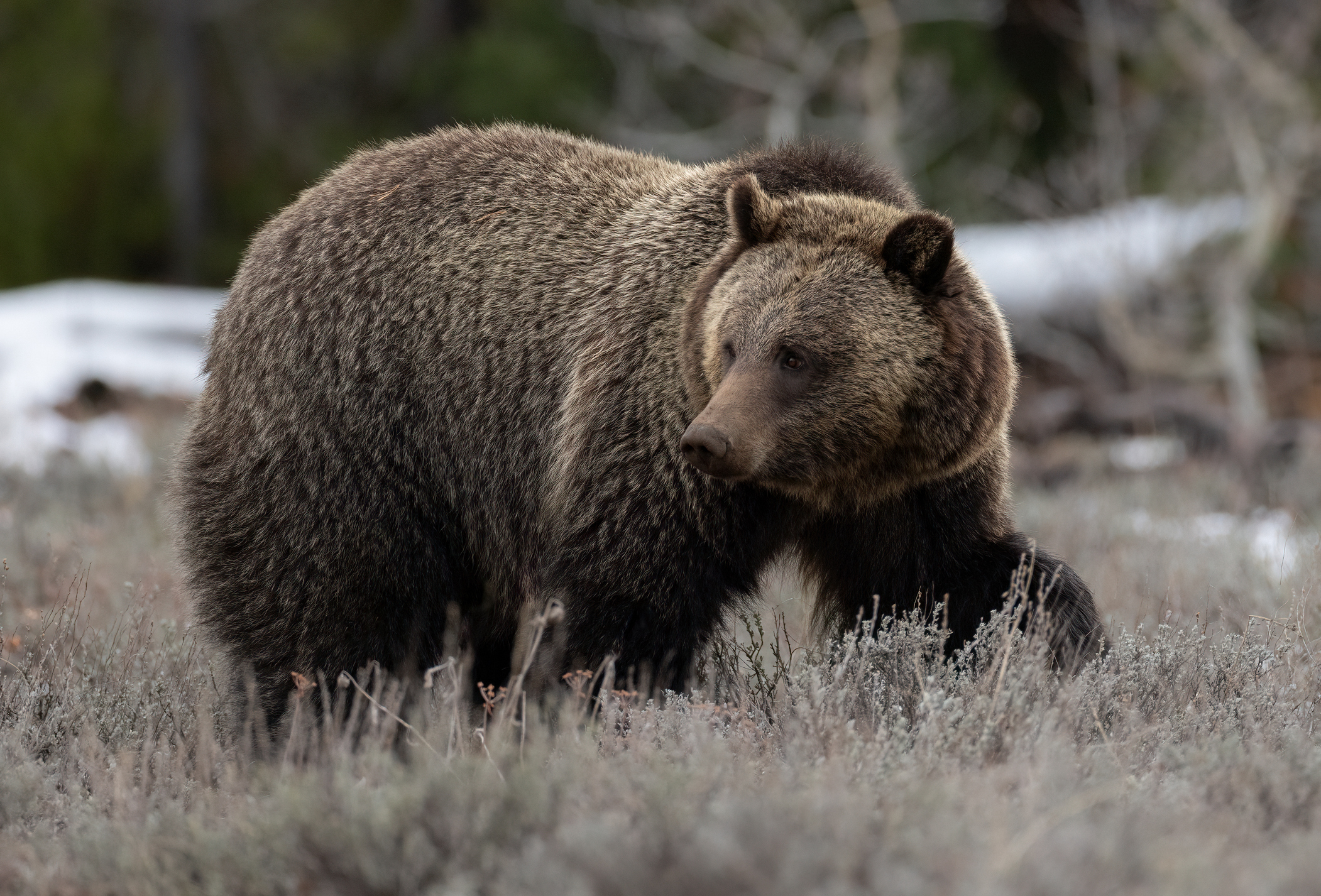 If you’ve never been to Jackson Hole, Wyoming, put it on your bucket list. Nestled at the feet of the Grand Teton mountain range on the border of Idaho, it is indeed a place where buffalo roam. And elk. And moose. And Grizzly bears.

I recently returned from Africa, where there’s absolutely no public camping in areas where lions and leopards lurk. This reason for policy is no great mystery … lions and leopards will eat you. Hyenas will eat you, too, but that’s too gruesome to even ponder — hyenas lack the manners to drain the life from their food prior to dining, and often eat their prey while it’s still … you get the picture.

It’s odd and admirable that Africa maintains that nit-picky rule about not being torn to shreds and eaten, because — where safety overkill is involved — America is the undisputed heavyweight champion of lunacy. We have more safety measures, liability release forms, elbow and knee guards, helmets, fences, gates, handrails, and caution signs (listing all the fun things we can’t do) … than any one nation in the world. Maybe the whole world combined. We literally have disclaimers on chainsaws that read, “Do not operate while intoxicated,” and laundry soap containers that plead with customers not to eat the contents.

However, we fall short in one area compared to African safety standards, as out in the Big Sky Country, hundreds of thousands of people each year are free to camp in tents where it is 100 percent certain Grizzly bears reside. To help tourists stay “safe,” every store sells hiking sticks with bells on them—these sure-fire deterrents exist because hikers and campers should make noise, and scare away bears before happening onto them. A startled bear is a naughty bear. The stores also sell pepper spray, to discourage a charging bear from dining on your tenderest loins.


Do these things work? Fellow writer and Montana native James Raymond once told me, “You know how you can tell black bear scat from Grizzly scat? Grizzly scat tastes kinda like pepper, and it has little bells in it.”

Now, if Africa won’t let you sleep with the lions and leopards, what gives with the USA allowing people to sleep amongst Griz while protected only by a nylon sheet and a fiber-fill sleeping bag? For a Griz, that’s packaged food: You tear open the wrapper, and inside are meat-filled Twinkies.

All over Jackson, especially outside camp grounds, are signs that say, “Be Bear Aware,” with a few pointless tips on how to avoid becoming dinner. The problem is that every kind of bear demands a different kind of action: With one kind, you play dead. With another, you make yourself look big, and yell. With yet another, you back way slowly, speaking in a calm voice.

Right. I’m going to properly identify the pedigree of the continent’s apex predator sauntering towards me, then remember the exact actions his particular pedigree prefers, all while stifling the urge to run away, screaming like a toddler in the midst of a tandem skydive.

“I always tell out-of-towners,” James told me, “Forget running. If you encounter a bear, back away slowly, looking like a large dead man.”

I always listen to expert advice, especially in matters that involve life and death. That said, and even in the face of Buster’s good advice, running will always be an option for me, provided I’m faster than the slowest person in the group.

The only sane place to view a Grizzly bear is on the NatGeo channel, while seated in a recliner with a tall drink in your hand. Everyone knows this. So when my buddy David Graham and I were driving on 89N out of Jackson and saw a Griz in the field to the west, we did exactly what you would do: We stopped, got out, and took pictures of it.

Now, don’t get me wrong — we didn’t act like typical Yellowstone tourons and try to get a selfie with it — but we did exit the car. And while he was a good 100 yards away, I’m fully aware a Griz can run down a horse at full gallop.

“Getting mauled would be un-bear-able,” I told David.

“I can’t bear the thought of it,” he replied.

“We should probably be bear-ing arms,” I opined.

“Now that you mention it,” Dave said, “the thought of being unarmed is really bearing down on me.”


And so on. When some semblance of sanity returned, we got in the car and left. As I recall, we had to bear left at the next fork in the road.

You can’t go to a place like Jackson and not think about our forefathers, foremothers, and forekiddos. These were flesh and blood folk like you and I, who rode in a covered wagon across 2,000 miles of untamed America. They crossed mountain ranges, forded raging rivers, dodged thousands of righteously infuriated Indians, survived diseases and starvation, endured thundering rainstorms, and arrived at Jackson Hole to say, “Hey, this ain’t bad. Sure there are bears, and wolves, and mountain lions, and enraged moose looking for mates — and it’s literally 1-degree five months out of the year — but this is the place.”

Here’s a list of the things they had to make their lives comfortable: Nothing.

No paved roads, no hiking boots, no central heat, no hardware store, no electric tools, no washing machine, no hospital, no bars or restaurants, no grocery store, no indoor plumbing, no Advil … the list of things you and I couldn’t live without is virtually endless. Just think about how much wood you’ve have chop to survive a six-month winter. And building a log cabin? Every single log involved schlepping to the forest, chopping down a perfectly straight tree, strapping it to your horse, dragging it god-knows how far back to your homesite, skinning it, planing it, chopping notches in it, and stacking it on the other 80 logs you’ve hauled home.

Oh, don’t forget to hunt your food, defended the carcass against the bears and wolves that equate the sound of your musket with a dinner bell, gut and dress it, tote it home, salt it, and store it for the winter… enough of it to feed the family of four for the six month winter that’s starting the week after next.

We’re not talking about mountain men and tough-as-leather cowboys … we’re talking about families. How many astronauts do you think would’ve strapped themselves to the top of that rocket if they had to take their family along? Ladies, what would you say if your husband declared over dinner, “I think it’s time we moved into the rainforests of Brazil. Everyone, pack a bag and cobble some good walking shoes. We’re leaving next week.”

Now consider where we are today: College students have crying rooms and trigger warnings. A minor insult is hate-speech. Flirting with a co-worker ends your career. Syrup is racist. A day-late Amazon delivery is the end of the world. We the people allowed our government to shut down the nation for two years for a virus with a 99.9 percent survival rate.

If there’s good news, it’s that we spring from hearty stock, you and I. Adventure and hardship are in our DNA. We have 400+ years of thriving as American individuals, families, and communities. And those things may be what save us from becoming a nation that tastes kinda like pepper, overflowing with discharged little bells.

Can we overcome the state of America today? Can Republicans and Democrats find some common ground, and work together like those early settlers of the Big Sky country? Can the new Republican majority resist the temptation of revenge, and loan their neighbor firewood for the winter? Can the Democrats step back, survey the new landscape, and graciously negotiate with the new bosses?

Maybe … but right now it’s a standoff, and the Mother Nature prefers life bloody, red in tooth and claw. The question is, will either side back slowly away and allow the situation cool?