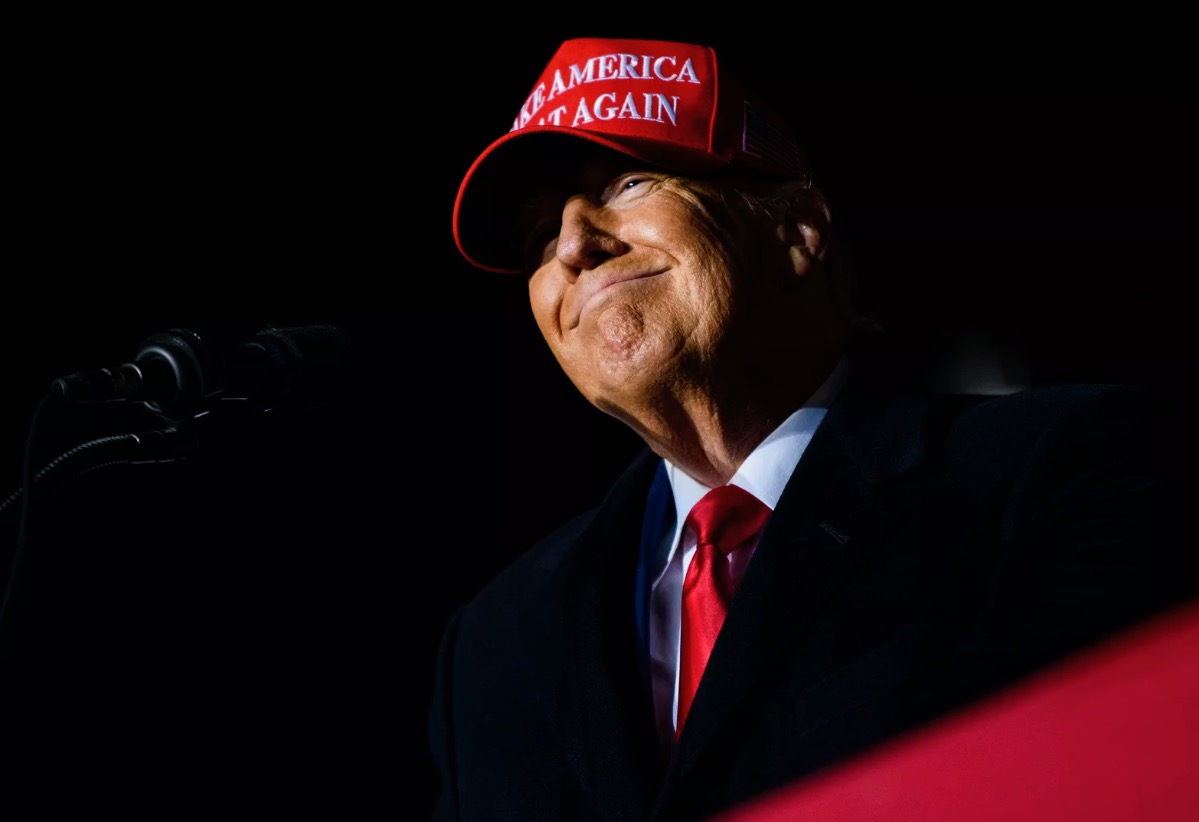 From one early voting state to another, it certainly looks as though former U.S. president Donald Trump will seek the GOP nomination for the presidency in 2024 – a move which could potentially clear the field of would-be “Republican” rivals.

During a rally in Sioux City, Iowa on Thursday, Trump gave his strongest hint yet that he will seek the GOP nomination for a third consecutive election cycle.

“In order to make to make our country successful, and safe, and glorious, I will very, very, very, probably do it again, okay?” he told the crowd. “Very, very, very probably.”

As chants of ‘Trump, Trump, Trump’ rained down on the 76-year-old billionaire, he added a bit of imminence to the announcement.

According to a report from Jonathan Swan at Axios, “Trump’s inner circle is discussing announcing the launch of a 2024 presidential campaign on November 14 – with the official announcement possibly followed by a multi-day series of political events.”

Trump is currently backed by 51.8 percent of the GOP electorate, according to the latest composite polling data from Real Clear Politics. Meanwhile Florida governor Ron DeSantis has the support of 20.5 percent of Republican primary voters – making him the only credible challenger to the former president at this stage of the game.

Elected governor in 2018, DeSantis has been hailed as one of the most consistently conservative GOP leaders in the country – and has made multiple visits to early voting states.

Trump and DeSantis (above) could conceivably run together … but there is an interesting constitutional hurdle to this GOP “dream ticket.” Also, there is a growing rift between the two candidates – one which is being seized upon by left-of-center media outlets.

Trump is beloved in early voting South Carolina – as evidenced by the response he received at his most recent rally in the Palmetto State back in the spring. Trump is also worshiped by the SCGOP establishment – which actually canceled the 2020 primary as a sop to the former president (a move that didn’t exactly pay off).

Still, Trump’s Palmetto State influence is not absolute – especially in increasingly suburban regions of the state. For example, voters in the first congressional district – the most ideologically moderate of the six GOP-controlled congressional seats in South Carolina – did not embrace Trump’s hand-picked challenger to first-term incumbent congresswoman Nancy Mace.

They ignored Trump and reelected Mace – who was backed by former South Carolina governor (and possible 2024 presidential contender) Nikki Haley.

Speaking of Haley, she is a potential wild card in this high-stakes GOP poker game – especially in South Carolina. Haley said last April she would not seek the GOP nomination in the event Trump were to run for a second, non-consecutive term – however that promise appears to have had a limited shelf life.

Haley is currently backed by only 2.5 percent of GOP primary voters, putting her behind not only Trump and DeSantis but also fellow third-tier candidates Mike Pence (7.5 percent) and Ted Cruz (2.8 percent).

Given the former U.N. ambassador’s identitypolitik shtick – and access to neoconservative cash – don’t count her out though.

I am often asked by members of the FITSNews audience where I am these days on Trump.

My answer is, I hope, instructive …


Tell me the issue and I will tell you what I think of Trump (or any other politician).

Energy independence? Foreign policy? Border security? On these issues, I think Trump was good for America (to the extent he was a consistent advocate, that is).

Lower taxes and less spending? Absolutely not. Contrary to his campaign promises, Trump was positively atrocious on these bread and butter issues. In fact, he stayed terrible on the fiscal front right up to the bitter end of his administration. That’s one reason the pre-Covid economy failed to grow as fast as it could (should) have – and why growth of the post-Covid economy has also been anemic.

Will any of that matter to primary voters in South Carolina? Or in Iowa? Or New Hampshire? We shall see … but I do not see Trump skating to the GOP nomination quite as easily as some seem to think he will.