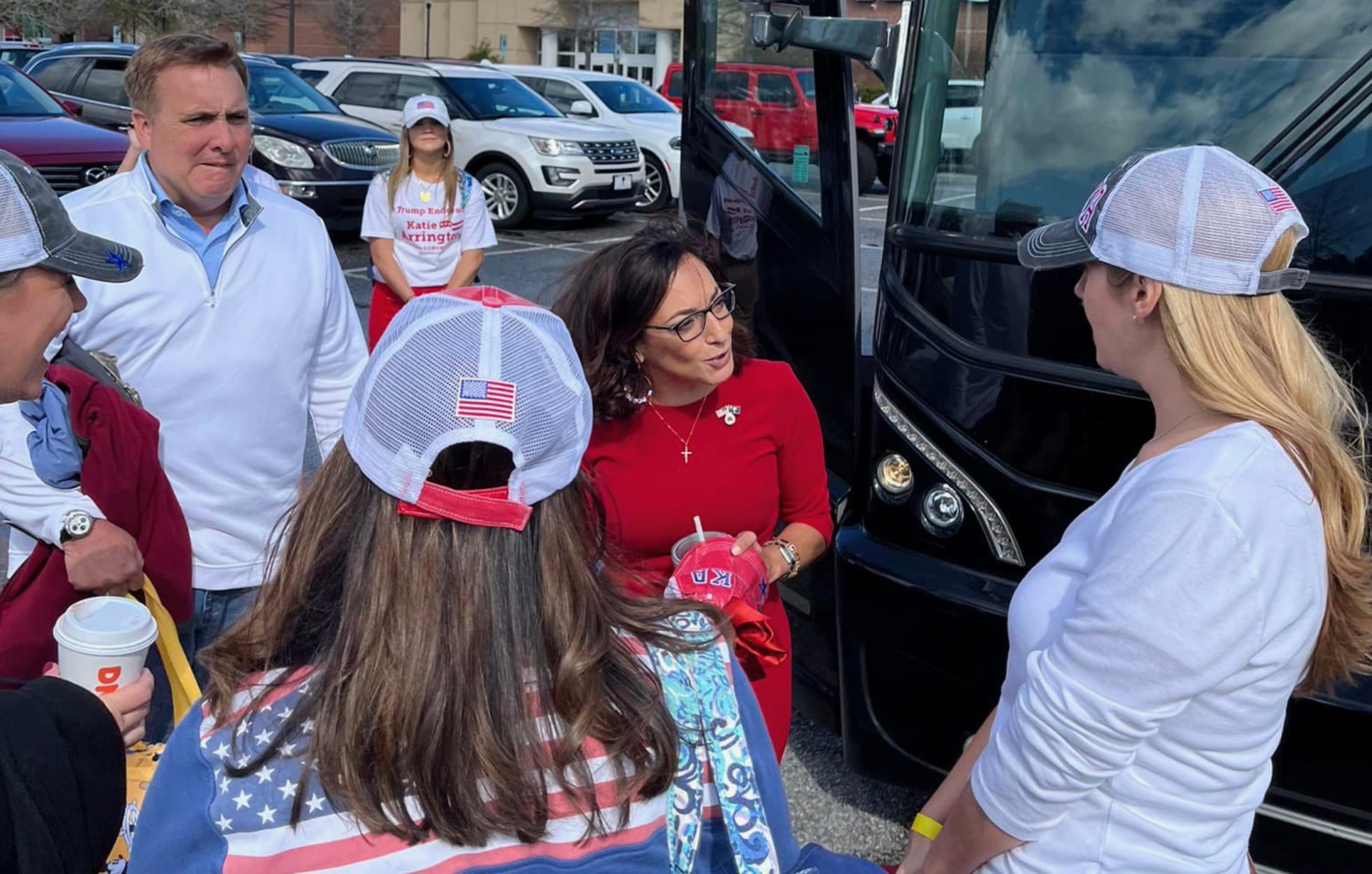 by GAVIN SMITH || Katie Arrington continues to prove herself most unfit to represent South Carolina’s First Congressional District. Whether it be sending profanity-laced text messages to South Carolinians who refuse to support her candidacy, or threats she’s lobbed at donors who won’t make a financial contribution to her campaign, Katie Arrington continues to put on full display why she isn’t capable of representing the Lowcountry in Congress.

As if these blatant shows of desperation and her very apparent lack of judgement aren’t enough to discredit her candidacy, Katie Arrington, who, earlier this year, allegedly had her top-secret security clearance suspended by the U.S. Department of Defense for leaking classified information, continues to underscore just how unfit she is to serve by continuously lying to the Lowcountry about both her and her opponent’s record supporting President Donald J. Trump.

In dozens of communications, at a handful of speaking engagements, during her disastrous debate performance, and even on stage at President Trump’s recent rally in South Carolina, Mrs. Arrington continues to mislead voters by referring to herself as a “Trump originalist.”

Moreover, aside from her unnerving rants about supposedly “being there from the very beginning for Trump,” Mrs. Arrington also has made it a habit to take stabs at her opponent, Congresswoman Nancy Mace, by attempting to paint her as a so-called “Never Trumper.”

Although these two claims have gained little traction amongst voters of the First Congressional District, as one of the six members of President Trump’s 2016 South Carolina campaign staff, I can tell you that both of these assertions made by Mrs. Arrington are categorically false and it’s far past time the record be set straight.

First, as it relates Mrs. Arrington’s “Trump originalist” claim, this is simply a lie. While it may be true that she pledged her support for President Trump at some point in time, there’s only one candidate running for the First Congressional District who was truly there on day one for Donald J. Trump – when all odds were stacked against him – and that is Congresswoman Nancy Mace.

In fact, just like me, and in stark contrast to Katie Arrington, who was a day one Marco Rubio for President supporter, Nancy Mace joined Donald Trump’s staff on day one.

Having known Nancy for several years prior to our working together on the campaign, I knew she had a reputation for being tough as nails, putting things bluntly, and working tirelessly to make the impossible – possible.

This reputation remained true in her work for Donald Trump, and I witnessed firsthand, despite Mrs. Arrington’s routine claim that Nancy is a “Never Trumper,” as she joined arms with our team to do what so many said couldn’t be done – defeating career politicians and winning the South Carolina Presidential Primary for Donald J. Trump.

On any given day, Nancy crisscrossed the state leading a number of grassroots events. She led our state’s phone banking operations, helped run the state’s social media pages, and oversaw our door-knocking campaign. Nancy worked from dawn until dusk to identify voters and she spearheaded our operation to turn them out on primary election day.


Nancy worked harder for Donald Trump than just about anyone in the room and following our historic victory in the South Carolina, that work earned her a position on the national campaign staff where she was charged with replicating her efforts in various battleground states.

It was here where Nancy traveled to more than a dozen states helping to stand up offices and train grassroots staff to identify and turnout voters. From Super Tuesday to the remaining primaries before Donald Trump became the Republican nominee, Nancy’s work made a difference and ultimately played a role in setting the stage for our head-to-head match with Hillary Clinton during the 2016 General Election.

Nancy’s efforts carried through the General Election, and it’s unquestionable that they played a significant role in our November 2016 historic victory over Secretary Clinton. Nancy did all of this while her opponent, Katie Arrington, supported Marco Rubio and anyone other than Donald J. Trump for President.

Facts are facts, are they couldn’t be more crystal clear: Katie Arrington’s campaign is based on a house of lies. With every stump speech and campaign ad, Katie continues to prove she’ll say whatever she needs to say, truth or not, all in an effort to try and get elected.

Nancy Mace is not a “Never Trumper,” and Katie Arrington isn’t a “Trump Originalist.” It was Nancy Mace, not Katie Arrington, who worked tirelessly for President Trump, and I have no doubt she’ll continue to do the same for you as your Representative in Congress. I urge you to support Nancy Mace for Congress on June 14.

Gavin J. Smith is CEO and founder of The Inspyre Group and a former Trump administration and 2016 campaign official.