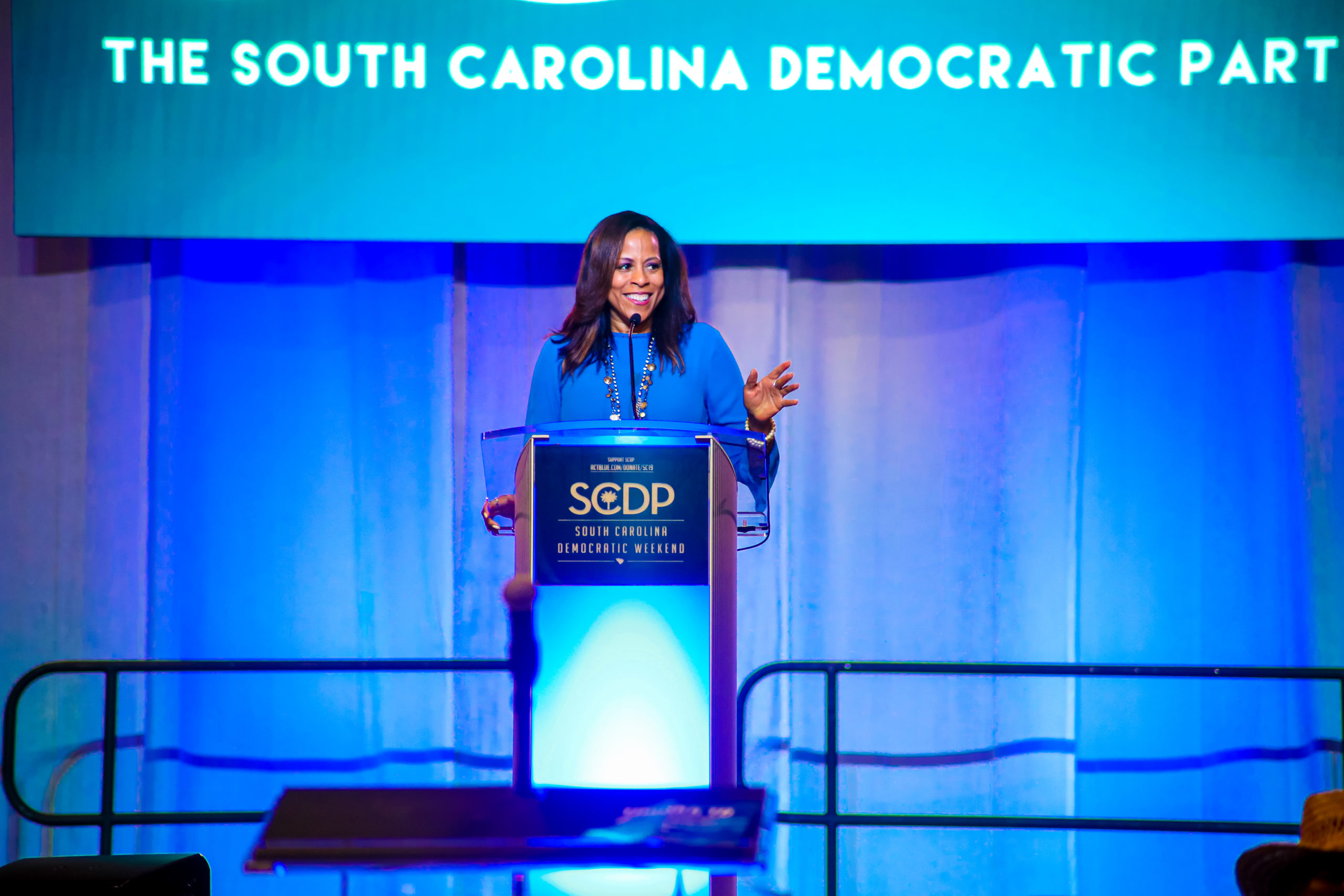 The party that purports to stand for women and minorities – and which relies on the black vote as the primary source of its political power – is refusing to let the first female minority to campaign for its gubernatorial nomination participate in its primary debate.

Technically, it’s much worse than that …

The party that purports to stand for women and minorities – and which relies on the black vote for its political power – is apparently refusing to hold debates ahead of the 2022 primary election because it doesn’t want to give a platform to the female minority candidate, Mia McLeod.

According to multiple sources familiar with the inner workings of the South Carolina Democratic Party (SCDP) – which has garnered plenty of bad press in recent weeks – debates aren’t being hosted because the skids have been greased for the party’s ostensible “frontrunner,” former congressman Joe Cunningham.

“They don’t want Mia to get the free publicity because if she did, she’d likely win – and the party wants Joe to get the nomination because he has better potential to raise money for them,” one veteran party advocate told me. “This is the first primary I can ever remember when there are zero televised debates.”

The advocate is correct: Democratic gubernatorial candidates debated twice in May and once in June in 2018 – when James Smith defeated businessman Phil Noble and attorney Marguerite Willis prior to winning his party’s nomination.

Smith was thrashed in the general election that November by Henry McMaster – who won 53.96 percent of the vote compared to his 45.92 percent.

According to my sources, a deal was reached between the S.C. Democratic Party Black Caucus (SCDPBC) and S.C. Educational Television (SCETV) to host one debate but “Joe didn’t want to do it.”

(Via: Joe for South Carolina)

Upon hearing of Cunningham’s stated preference, SCDP leaders “reached out to SCETV and told them the debate wasn’t sanctioned by (them) – so they canceled it,” one source said.

SCDP chairman Trav Robertson refused to comment to this news outlet about the party’s role in the SCETV debacle. Meanwhile, an SCETV spokesperson did not immediately respond to a request seeking comment.

One former Democratic candidate – progressive health care advocate Gary Votour – rebuked SCDP leadership for “sabotaging attempts to have a debate between (the) candidates.”

“Everyone has a right to know where candidates stand on important issues before voting in a primary,” Votour told me. “Despite attempts within the Democratic party to organize a debate between their candidates for governor, I’ve been told that the party chair, Trav Robertson, has refused to allow it. This is typical of the reasons I left the party primary in order to run as the Labor Party candidate.”

Votour dropped out of the Democratic race back in January and announced his intention to campaign as a member of the Labor Party.

While Robertson declined to speak with us, he did fire back at Votour … repeatedly.

“Gary, you have no factual basis for your tweet and you don’t have any idea what you are talking about,” Robertson tweeted.

“I am tired of people talking without facts and insinuating comments without facts,” Robertson added. “You are supposed to be better than the election deniers who don’t believe in facts or science but I suppose you are not.”

Robertson also slammed Votour and others on Twitter as “conspiracy theorists.”

“You and your conspiracy theorist and fact deniers need something to rail against,” Robertson (above) tweeted. “Don’t let the facts and truth get in your way. You can only insult, insinuate and create conspiracies in an attempt to get attention.”

Former state representative Mandy Powers Norrell – the Democratic nominee for lieutenant governor in 2018 – tweeted at SCETV earlier this week saying she “hadn’t heard any dates for a gubernatorial Democratic primary debate this year.”

Norrell later tweeted that the party still had time to scheduled debates between McLeod and Cunningham.

“I hope we start to see some debates because this is an important race,” she added.

What do the candidates think of all the hubbub? I reached out to both McLeod and Cunningham to get their thoughts … but only one of them responded.

“South Carolinians deserve to hear the gubernatorial candidates debate the issues that matter most,” McLeod told me “I’ve eagerly accepted every invitation to debate I’ve received. Yet, every scheduled debate during this primary election has been canceled, which works to my opponents’ advantage. It’s so disappointing that the public won’t be given an opportunity to make an informed decision as they begin to cast their ballots when early voting starts next week.”

“The people of South Carolina need and deserve at least one professionally broadcasted debate,” McLeod said. “When my friends James and Mandy ran four years ago, there were three publicly broadcasted debates before the primary. So, other than having the first black woman to ever run for governor of South Carolina, who also happens to be the only qualified gubernatorial candidate on the primary ballot this year, what else has changed?”

Cunningham did not respond to my request for comment. His strategist, Tyler Jones, said Cunningham had agreed to one debate – sponsored by The (Charleston, S.C.) Post and Courier – but that McLeod could not attend that forum.

“Not sure what you are hearing but we accepted an invitation to a Post and Courier debate in Charleston but Senator McLeod did not,” Jones said. “We had a conflict on the one date we were given for an ETV debate and they cancelled. Joe and Mia have done over a dozen candidate forums which is probably why no one tried to organize a debate until three weeks before the primary. We are still in negotiations to try to make something work before the primary.”

In addition to her potential to galvanize black turnout, McLeod is viewed by many Democrats as a much bolder, more aggressive choice than Cunningham – not to mention a battle-tested candidate who is not afraid to take the fight to the GOP. The 53-year-old native of Bennettsville, S.C. is fresh off of a convincing win in what used to be a swing Senate district – race in which she was targeted for defeat by GOP special interests.

It has been more than three decades since Democrats nominated a black candidate for governor.

“You have to go all the way back to 1990 to find the last black Democratic gubernatorial nominee, and McLeod could easily capitalize on building resentment within the black community over this ongoing marginalization,” I noted in a post last fall.

I also noted McLeod was well-positioned to capitalize on frustrations expressed by many “progressive” South Carolina voters who view the ostensibly “moderate” Cunningham as little more than “McMaster Light.”

Perhaps that’s another reason Cunningham doesn’t want to take the stage alongside McLeod?

Should the South Carolina Democratic Party host a debate between its two gubernatorial candidates?