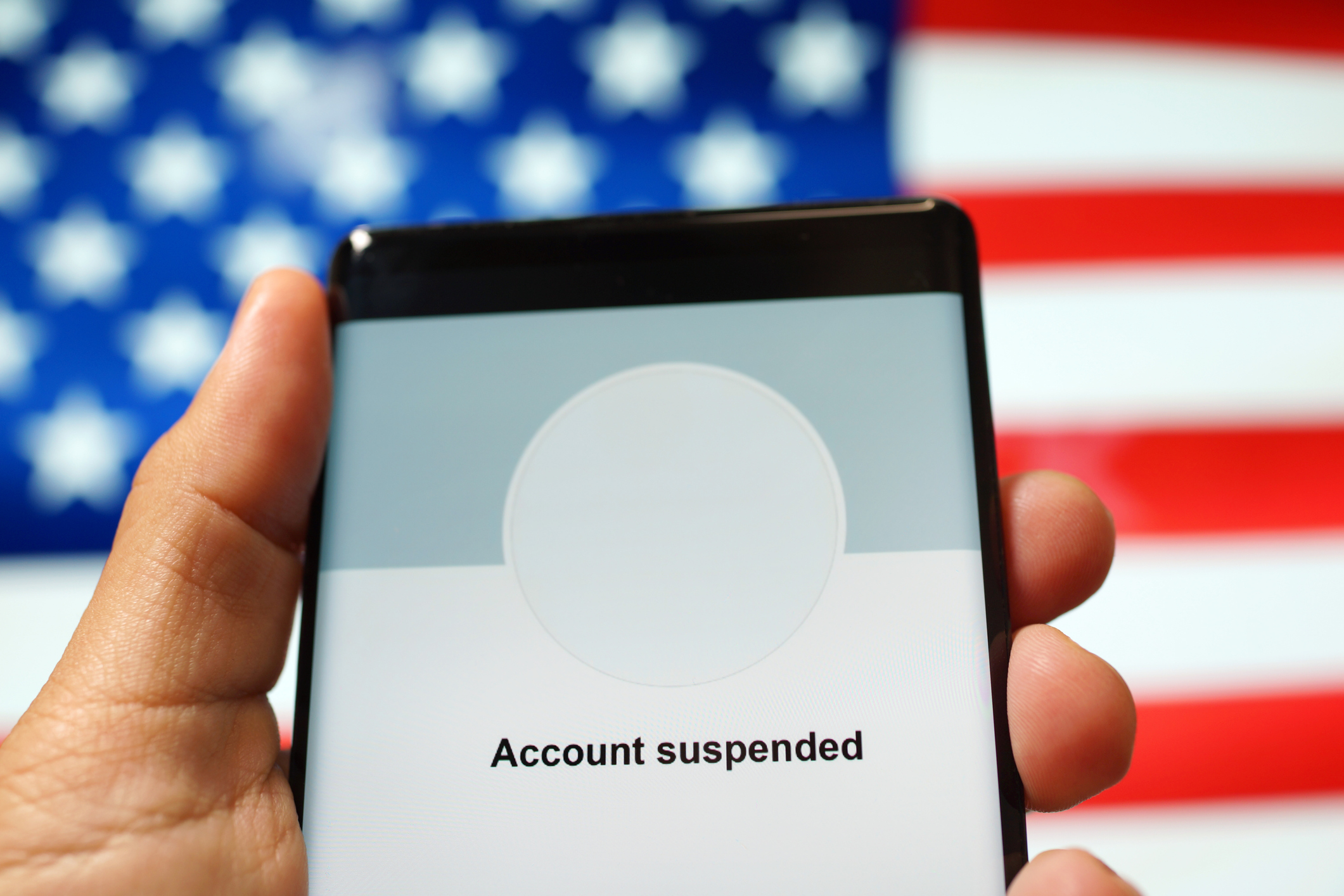 I like Twitter. Always have. It’s (usually) a fun, engaging platform – providing a rapid-fire exchange of diverse perspectives in an abbreviated, easily digestible format. The platform is perfect for our attention deficit disordered society – and perfect for people like me whose general smart-assery can only be tolerated in small doses.

For years, Twitter has been my social media platform of choice. It’s been a place I would go to expound upon the news I published on this website, to share links from other websites and to provide updates on breaking stories.

And yes, it’s a place I go to talk trash about utterly worthless politicians, the institutions propping them up and the sycophantic mainstream media outlets providing them cover.

All of which I do gleefully …

The problem? Twitter’s goalposts keep moving. And the site continues to demonstrate an alarming bias and hypocrisy in the enforcement of its “rules.”

As I noted in the weeks leading up to the 2020 presidential election, Twitter had already begun to morph into a “far left echo chamber,” a “shadow of the free thinking forum it used to be.”

The progression actually began much earlier than that. First it was shadow banning. Then it was flagging accounts and modifying messages. And in the days leading up to the 2020 election, the platform began actively suppressing certain news stories – while suspending or blocking accounts which shared them.

It’s just sad to see the overt bias and hypocritical enforcement escalate so egregiously after Twitter chief Jack Dorsey appeared before the U.S. Congress a few years back and swore up and down about his company’s commitment to “impartiality.”

“We believe a key driver of a thriving public square is the fundamental human right of freedom of opinion and expression,” Dorsey testified, adding that “Twitter will always default to open and free exchange.”

Unfortunately, Twitter has utterly failed to uphold that fundamental right – or provide such a free exchange. In the meantime, it has utterly defaulted to woke orthodoxy.


Again, though … isn’t all of that ultimately up to Twitter? As a private company, can’t it continue being completely full of scheisse if it wants to be? Doesn’t it have every right to selectively define (and inconsistently enforce) whatever terms of service it wishes?

It does … but here’s the thing: Twitter, Facebook, YouTube and other mega-companies operate on platforms which carved out their place in the American marketplace primarily due to the freedom of expression they offered.

Having made billions off of this model – which thrived in no small part thanks to legal protections guaranteed by the federal government (i.e. Section 230 of the 1996 Communications Decency Act) – should they now be allowed to regulate speech subjectively?

In other words, if expression on these platforms is no longer free – or worse, if it is being suppressed or censored on the basis of ideological orientation – should Twitter, Facebook and YouTube still be allowed to profit from federal protections?

Put another way – is there a compelling government interest in protecting free (and equal) speech on these forums?

Ultimately, I think the power of the marketplace – not the heavy hand of government – should be allowed to sort things out. And slowly but surely, this is exactly what is happening. Twitter’s profit margins are declining and it actually started shedding U.S. users in 2021.

Who wants to play when the game is rigged?


While Twitter benefited from a massive, post-pandemic retrenchment of advertising revenue – and from perpetual societal shutdowns which left tens of millions of Americans glued to their devices (shutdowns the platform championed, incidentally) – its current trajectory is simply not sustainable. Nor, frankly, is its sustained hypocrisy.

I am a perfect example of this lack of sustainability. I am was engaged on Twitter. I am was an active user. I am was what some might even describe as an “intelligent user.” I am was the kind of user who initiated discussions, stimulated exchanges and drew all manner of reactions from users – including reactions from trolls which artificially inflated Twitter’s user count. I used to retweet people who disagreed with me, who hated me and yes … people with “verified” accounts who broke all sorts of “Twitter rules.“

And while my contributions to the platform certainly aren’t as big as some – or as frequent as others – I am precisely the sort of user Twitter needs to retain.

Why? Because my interactions helped this platform generate attention, attract visitors and facilitate interaction amongst its users – all of which enhanced the value of the service.

But this week? Yeah … hard pass.

Twitter suspended FITSNews over the weekend after we posted a video of a black student attacking a white student at a South Carolina middle school. The clip of this attack – which drew nearly half a million views prior to being pulled – purportedly violated the site’s rules.

So Twitter yanked the clip … and suspended FITSNews for posting it.

The problem? The clip we posted is no better or worse than literally thousands of videos that are streaming on Twitter right now.

In addition to random “fight club” content, violent clips are routinely allowed to remain on Twitter if there is some “social justice” angle to be exploited by their presence.

In fact, such clips actually appear to be amplified by the platform’s algorithms.

Kinda makes you wonder, right? Why would the posting of one violent clip result in a user being suspended – yet a similar clip posted by another user ends up soaring to the top of Twitter’s keyword searches? Surely it doesn’t depend on the skin color of the individuals involved in these altercations, does it? (Coughs). Or for that matter, of the individuals posting the clips?

Seriously … why is one form of injustice more unjust than the other?

The clip I posted on Twitter unfortunately saw numerous racist responses – from both black and white Twitter users.

Not only did I condemn these racist responses on FITSNews Twitter page, I took the additional step of penning an article on my own news outlet rebuking the “racist provocateurs” and “opportunistic culture warriors” who parachuted into this story and “went to work segregating people’s raw, emotional responses to the video – injecting them with a tribal toxicity.”

Nonetheless, the censors determined I “violated the Twitter Rules” and that FITSNews would “need to wait some time before using Twitter again.”

Seriously? The woke thought police literally put my news outlet in “time out.” Like an unruly child.

Luckily for me, I don’t need Twitter. I run a news outlet that draws a million eyeballs a month, people. And I just launched a new video format that will double my exposure by the time I’m done with it. In other words, I can tell Twitter where to put its censorship.

The platform does provide some value to me and my business, but as noted above … I also provide value to Twitter.

And when I pull back from social media activity it reduces the value of the platform – by a microscopic degree, I will grant you – but nonetheless by a measurable one. And when more people like me (and more independent thinkers such as those of you reading this article) decide to reduce engagement on the platform – or abandon it altogether due to its bias and hypocrisy – that also has an impact.

My new approach to Twitter moving forward? Eh. I will continue to allow this news outlet’s auto-poster to populate the FITSNews’ twitter feed with stories. And from time to time I may retweet something I find funny.

As for tweeting links to other people’s content, I don’t need Twitter for that, either. I have my own aggregator.

… but I will probably start saving those cute kid pics for this site, too.

Will my decision to pull back from Twitter have any impact on the long-term trajectory of the platform? No. I have a huge ego, but believe me: It’s not that big. I am not King James. Or Donald Trump. Or Justice Beaver.

I do think it’s important to exercise our power in the marketplace where we can, though. And more importantly, to let people know why.

Most importantly, though, unlike Twitter I will continue operating a platform which consistently upholds the principles of “freedom of opinion and expression.” As long as I am editor, FITSNews will always extend its open microphone to anyone with an intelligent take on any issue – whether the perspective conforms with what I believe, runs counter to what I believe or violently rebukes what I believe.

Why? Because I am not here to convince you that what I believe is right. I am here to host a conversation in which all of us strive toward right together.

“The ultimate good desired is better reached by free trade in ideas – that the best test of truth is the power of the thought to get itself accepted in the competition of the market,” legendary supreme court justice Oliver Wendell Holmes Jr. wrote over a century ago.

I will close this “Saturday sermon” with a line from my column a week ago rebuking the racism that followed from the video we posted.

So long, Twitter … it was fun while it lasted.