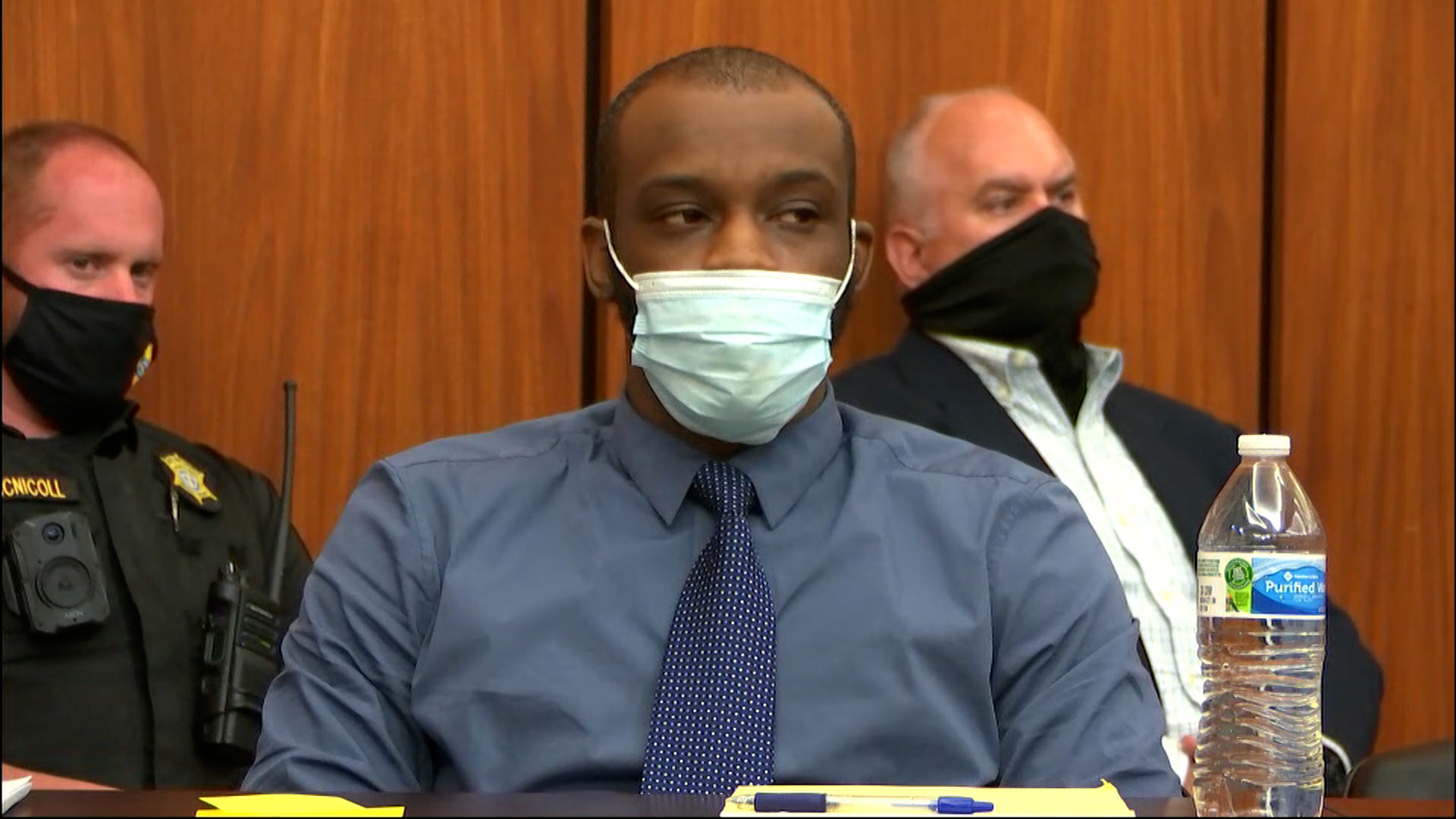 After deliberating for only an hour and seven minutes, a Richland County, South Carolina jury found Nathaniel Rowland guilty of the March 2019 murder and kidnapping of University of South Carolina student Samantha Josephson.

On Tuesday, S.C. circuit court judge Clifton Newman sentenced Rowland to life in prison after the jury found Rowland guilty on all three counts — murder, kidnapping, and possession of a weapon during a violent crime — in the high-profile South Carolina Fake Uber case.

Rowland addressed the court for the first time on Tuesday afternoon before his sentencing. He claimed he was innocent and said he wished the state would have done more “to find out who the real killer was.”

Newman said that there was “avalanche of evidence” stacked up against Rowland and said that the Columbia Police Department and the South Carolina Law Enforcement Division (SLED) did “the best job investigating” that he has seen in 30 years.

Rowland remained emotionless throughout sentencing Tuesday — and Newman noticed this.

“I have dealt with the heartless and you fall into that category — a person without any remorse whatsoever,” the judge told Rowland. “A person who is totally emotionless… we call it a depraved heart.”

Newman looked at Rowland, who has no prior convictions, and said it would be “astonishing” if he didn’t show any signs of violent behavior before Josephson’s murder.

Josephson was last seen getting into a vehicle she is believed to have thought was her Uber ride at around 2:00 a.m. EDT on March 29, 2019 in the Five Points area of Columbia, S.C.

Josephson’s body was found the same day she was killed around 3:30 p.m. March 29 by turkey hunters approximately forty feet off of Black Bottom Road in New Zion — which is roughly an hour-and-a-half drive from downtown Columbia, S.C. — less than two miles from her accused killer’s home.

During victim impact statements, Samantha’s boyfriend said she was out celebrating that night because she got into law school and was close to graduating from the University of South Carolina.

Samantha, a bright 21-year-old from New Jersey, “was a reflection of everyone’s child,” her mother Marci Josephson said.

“She brightened up the day with her smile,” Marci said. “The pain and loss are beyond words. He changed me forever. The heinous and brutal crime could have happened to anyone.”

Samantha’s mother, father, and sister each spoke during sentencing and urged the judge to impose the strictest sentence possible for Rowland.

Her parents said they have been stuck in a living nightmare since the day their daughter was killed — forced to visualize Samantha’s gruesome murder over and over.

“Such a heinous, vicious crime, why? I have spent the last two years asking myself that question,” Marci Josephson said.

The defense asked for a retrial on the basis of the jury not deliberating sufficiently, but the judge overruled that motion.

“Everyone has choices, but it was his choice to kidnap and murder Sammy and he will have to face the consequences of his choices,” Marci Josephson said.

The jury handed down its guilty verdict just hours after they heard closing arguments.

On the final day of the Rowland’s trial, deputy solicitor Dan Goldberg told the jury that Nathanial Rowland must be held accountable for the “cold-blooded, malicious and intentional” murder of University of South Carolina student Samantha Josephson.

“Remain focused on the evidence in the case, do not get distracted,” Goldberg told the jury. “Nathaniel Rowland brutally murdered Samantha Josephson and left her in the woods to rot.”

Goldberg then replayed video of the last moments Josephson was seen alive — waiting for her Uber driver on a street corner in the Five Points area of Columbia, S.C. around 2 a.m. March 29, 2019.


Goldberg said that Rowland was “lurking and waiting” for Josephson “like a shark.” A video showed Rowland’s Chevy Impala jumping the curb before Samantha mistakenly got into the car she thought was her Uber — before she was kidnapped and stabbed more than 100 times.

The prosecution was never clear on the accused killer’s motive, but Goldberg said Rowland didn’t have a job at the time of the murder and needed cash, which is why he tried to get money from Samantha’s debit card and phone.

Goldberg reminded the jury that only New Zion locals know of the rural spot where Samantha’s body was found.

Rowland was arrested by police on March 30, 2019 in connection with Josephson’s murder after a city of Columbia police officer spotted him driving the same black Chevrolet Impala that was seen on surveillance videos.

During closing arguments Tuesday, Goldberg reminded the jury of the “avalanche of direct and circumstantial evidence” in the case, including:

Goldberg dedicated several minutes of his closing argument to Maria Howard’s testimony. Howard was supposed to be a star witness for the state — but ended up planting several seeds of doubt into the prosecution’s theory.

On Wednesday, Howard seemed to flip-flop her story between the prosecution and the defense when she was asked what she and Rowland did in the early mornings hours of March 29, 2019 – which is when Josephson was abducted.

Maria Howard claimed that she saw Rowland cleaning his car — and a bladed weapon — on the day after Josephson was killed, but she never went to police about it because she said she was “tired.”

Howard also claimed that she drove the car that was covered in blood to pick up her daughter that day.

Following Howard’s explosive testimony, a SLED agent testified that they found a pile of evidence —including the murder weapon and several pieces of clothing with blood on it — from Howard’s house.

“Don’t get distracted from the facts of this case,” Goldberg reminded the jury. “This case is about holding Mr. Rowland responsible for the malicious and intentional acts that he committed in the murder and kidnapping of Samantha Josephson.”

Some evidence presented at trial poked holes in the prosecution’s theory, including:

Goldberg told the jury that Rowland’s DNA was not found on Josephson because he was wearing gloves and a jacket during the crime.

He asked the jury to use common sense while making their decision.

In the defense’s closing argument, Rowland’s attorney Tracy Pinnock urged the jury to look at all of the facts in the case — and not just the evidence the state presented.

She asked the jury to focus on the unidentified DNA from unknown males that was found on multiple pieces of evidence.

“The unidentified people that the state wants to just brush off like they’re no big deal — they do matter,” she said. “DNA evidence does matter.”

Like the prosecution, Pinnock spent several minutes on Maria Howard’s testimony and said “none of that makes any sense.”

“Why would she drive a car covered with blood?” Pinnock asked. “And then just go about your day like everything is fine?”

Pinnock reminded the jury of the several pieces of evidence found at Howard’s house.

“All of these bloody items were found in her house.” she said. “She can say whatever she wants, I don’t know what’s going on in her head, but her fingerprints and DNA are all over those bags.”

Pinnock accused Howard of lying about seeing Rowland cleaning the murder weapon too.

She then reminded the jury the SLED agents said they found a “weak” amount of Rowland’s DNA on the murder weapon.

Pinnock brought up DNA several times throughout her closing statement. She emphasized the fact that Rowland’s DNA was not found under Josephson’s fingernails, even though there was proof of her fighting her attacker. Rowland didn’t have any marks or scratches when he was arrested.

The defense never mentioned the fact that the prosecution’s theory missed a big part of this case — motive.