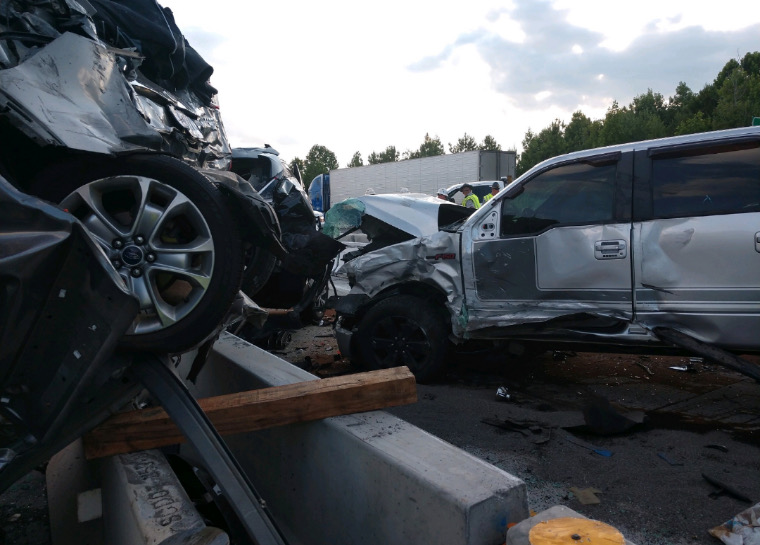 Last weekend, I penned an article on an unfolding infrastructure disaster in the South Carolina Upstate. My report focused on a construction zone along Interstate 85 in Cherokee county where lanes are being widened as part of a long-overdue upgrade of this critical commercial artery.

Like many other big ticket infrastructure fixes in the Palmetto State, this project should have been completed decades ago – but state leaders have been too busy blowing taxpayer money on non-essential crony capitalist projects to prioritize core transportation needs.

And people wonder why roads in South Carolina are so deadly?

Anyway, the stretch of road in question – which carries Interstate 85 from Spartanburg, S.C. to the North Carolina border – has become “a veritable gauntlet of construction zones, many of which feature dangerous one lane ‘chutes’ lined with concrete barriers,” I noted.

For a follow-up with photos from a recent crash, click here.

“These chutes should be called death traps,” Cherokee county coroner Dennis Fowler said in the aftermath of the latest crash – which left three people dead and another six injured.

Meanwhile, a petition calling on the much-maligned S.C. Department of Transportation (SCDOT) to remove these concrete barricades has drawn more than 11,500 signatures in the last six days.

Since the latest crash, my news outlet has been bombarded with tips about this project – as well as requests for information about the status of the construction. According to my sources, SCDOT’s Interstate 85 upgrade in Cherokee county remains a “very fluid situation” – especially as it relates to dealing with the rising death count associated with these single lane “chutes.” In fact, prior to last week’s horrific rear-end collision in the southbound lane of traffic – which sent multiple vehicles flying over the concrete barrier into the northbound lane of traffic – project engineers were reportedly holding regular meetings in an effort to determine the best way to address these “death traps.”

Orangeburg, S.C.-based Blythe Construction is the lead contractor on this job, and is working under the auspices of SCDOT. Ultimately, though, the buck stops with SCDOT and its director Christy Hall – a confidant of former governor Nikki Haley who was recently given (another) massive bump in salary.

As of this writing, I am told there is no comprehensive plan in place to address the rising number of accidents in the construction zone. According to a source familiar with the project, the only way to complete the widening more expeditiously would be to “shut down a lane each way” and route Interstate 85 traffic through various “frontage roads” in Cherokee county.

Absent that, workers are going to have to address the various stretches of road traversed by these “chutes” incrementally – which could take up to six months. And that’s assuming everything goes according to plan.

And assuming the “incremental” fix is adopted, the underlying problem remains …

“I don’t know how anybody in their right f*cking mind can think it’s a good idea to run 100,000 cars and trucks a day down a 14-foot-wide chute at 65 miles per hour with no way to merge or swerve to avoid collisions,” the source said. “In the grand scheme of things it’s government-run, and government f*cks everything up.”


Adding another layer of intrigue to the mix? I continue to hear reports from my network of Upstate sources attesting to SCDOT’s foreknowledge of the dangers associated with the project.

Acting on a tip, I reached out to several of my law enforcement, fire and emergency medical services (EMS) contacts in and around Cherokee county this week and asked them about a series of Interstate 85 project meetings that reportedly took place several years ago – prior to the initiation of the widening project.

At these meetings, these agencies were said to have been warned in no uncertain terms by project managers about the likelihood of a “steep rise in fatal collisions” during the construction period – and told to prepare for the uptick.

“They knew it would cause accidents and deaths,” one source said.

Another source echoed that assessment …

“They knew people were going to die,” the source said, referring to SCDOT. “They had numbers.”

Perhaps not surprisingly, my news outlet is preparing several Freedom of Information Act (FOIA) requests in the hopes of uncovering as much information as possible from SCDOT about the true origins of this project – and in particular the widening efforts in Cherokee county. Again, though, the deeper issue here as far as I am concerned is not necessarily the poor planning associated with this project. Instead, I am concerned that necessary upgrades which should have been completed in the early 2000s are just now being undertaken.

Worse still, the completion of this project is by no means the proverbial end of the road (work).

“They will end up needing to expand it again in 2030 because we piecemeal everything,” one frustrated Upstate resident told me last week when I was just beginning to investigate this issue.

Stay tuned … my news outlet is just beginning to dig on this infrastructure debacle.