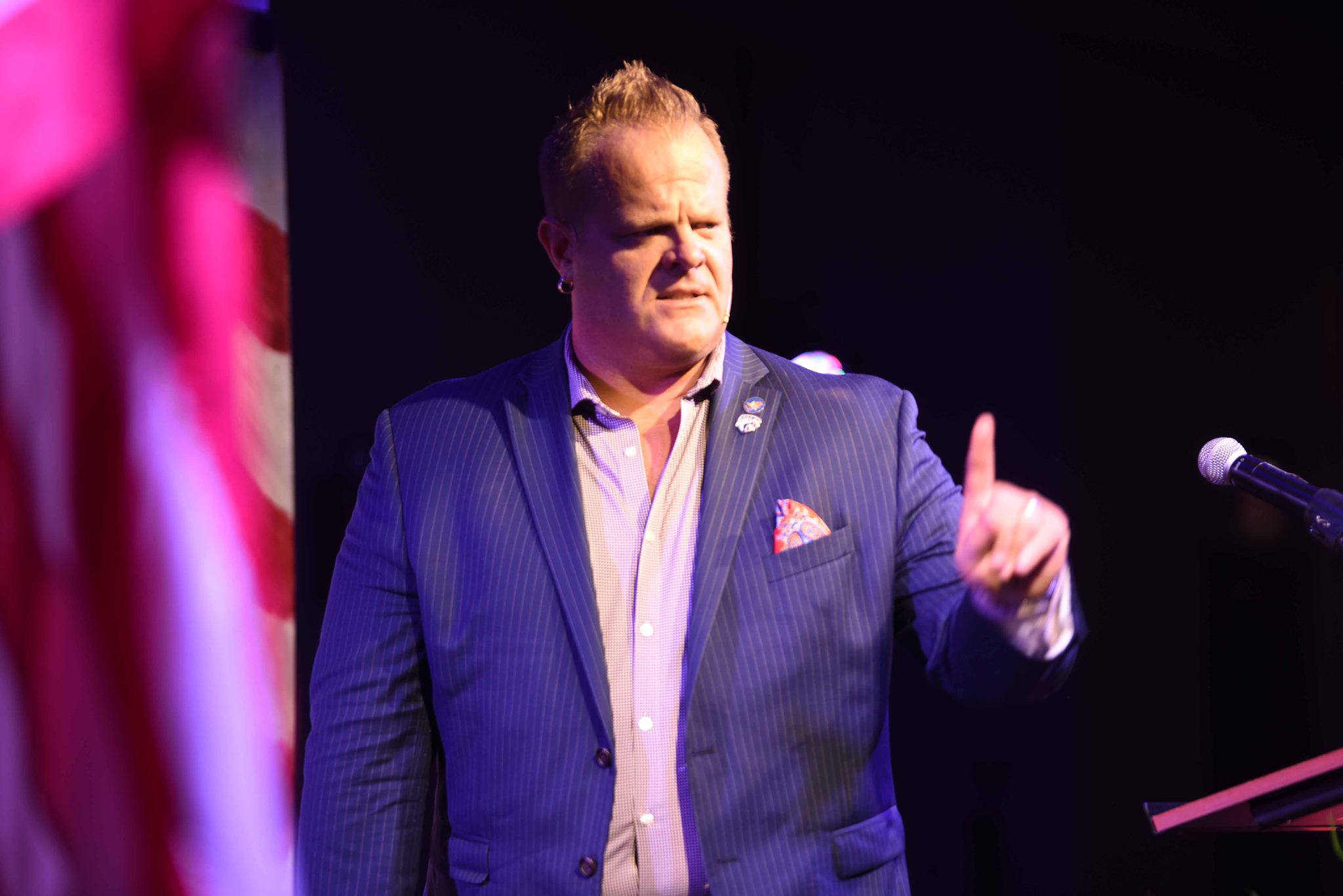 As he promised he would do, protester Matthew McDaniel of Clemson, South Carolina has filed a lawsuit against multiple parties in connection with violence that went down at the “Rock the Red” event in Greenville, S.C. last month.

McDaniel, readers will recall, was body-slammed to the ground at this “conservative” gathering by Chad Caton, the host of an internet radio show based in Horry county, S.C.

Caton – who has a history of combative behavior – assaulted McDaniel after the protester grabbed a microphone at the conclusion of this gathering and began to verbally accost retired lieutenant general Michael Flynn, who delivered the keynote address at the event.

Caton’s body-slam of McDaniel was captured on video and posted to the website MyrtleBeachSC.com.

Caton claimed McDaniel posed a threat to Flynn – which compelled him to take swift action in order to defend the former military leader (who briefly served as national security advisor under former U.S. president Donald Trump).

This theory was put forward in the days immediately following the assault by other conservative leaders – all of whom hailed Caton as a “hero.”

According to McDaniel’s lawsuit (.pdf), Caton “walked up behind him, grabbed him, and slammed him to the ground” after he began his verbal harangue against Flynn. After that, Caton allegedly held him in “a horse-collar grip while he remained on the ground.”

“Once (McDaniel) regained his feet, he was aggressively pushed and held by Caton as they moved through the crowd,” the lawsuit continued. “Caton slammed (McDaniel) to the ground a second time and (dragged) him on the floor. Once he regained his feet, (an unnamed defendant) walked up to (McDaniel) and punched him in the face while Defendant Caton did nothing to stop him.”

McDaniel’s suit targets Caton, the organizers of the “Rock the Red” event as well as a South Carolina-based conservative website called The Standard – which allegedly published “numerous defamatory and false statements” related to the incident, including the allegation that McDaniel was a “terrorist” affiliated with the radical Antifa movement.


The website also falsely accused McDaniel of “(swinging) a weapon at Caton, striking him in the jaw,” according to the lawsuit.

“There was never any weapon and Caton was never struck by anyone,” the lawsuit noted.

The suit also targets the Horry county Republican party and its recently elected executive committee member Tracey Beanz – alleging that both the party and Beanz falsely accused him of possessing a weapon during his demonstration at the “Rock the Red” event.

“Beanz stated that she was an eyewitness to the actions of (McDaniel) and that he did, in fact, have a weapon,” the lawsuit stated. “This was a lie.”

To read my latest treatment of that drama, click here.

Finally, the suit names “John Doe #1” – whom it asserts is responsible for punching McDaniel in the jaw.

McDaniel’s suit was filed by Columbia, S.C. attorney Tucker Player. It seeks a jury trial, a judgment against the defendants as well as full and fair compensation for “nominal, actual, general, special and consequential damages.” Furthermore, the suit seeks “punitive damages” as found “appropriate by the court.”

Player, incidentally, is involved in another high-profile lawsuit in the fifteenth circuit … one alleging a conspiracy in support of the 2020 reelection of liberal S.C. Senate judiciary chairman Luke Rankin.

From the beginning of this drama, I have argued that Caton clearly overreacted to the alleged “threat” posed by McDaniel – and that “the statements offered up in his defense by event organizers and party leaders strike me as significantly overstating the ‘danger’ posed to Flynn by (McDaniel).”

To be clear: I am not defending McDaniel’s conduct. His actions displayed a complete and total lack of class, and I can certainly understand how many people would feel as though he got what was coming to him based on the way he acted.

Still, those who meted out such a violent response to McDaniel demonstrated the same lack of class …

Accordingly, it seems to me as though McDaniel has a compelling civil case against Caton. Frankly, I am surprised the S.C. thirteenth judicial circuit has not already pressed assault charges against the so-called “conservative shock jock” in the aftermath of this incident.

UPDATE: Some reader reaction on this story …

Letter: Chad Caton Was A Hero At ‘Rock The Red’