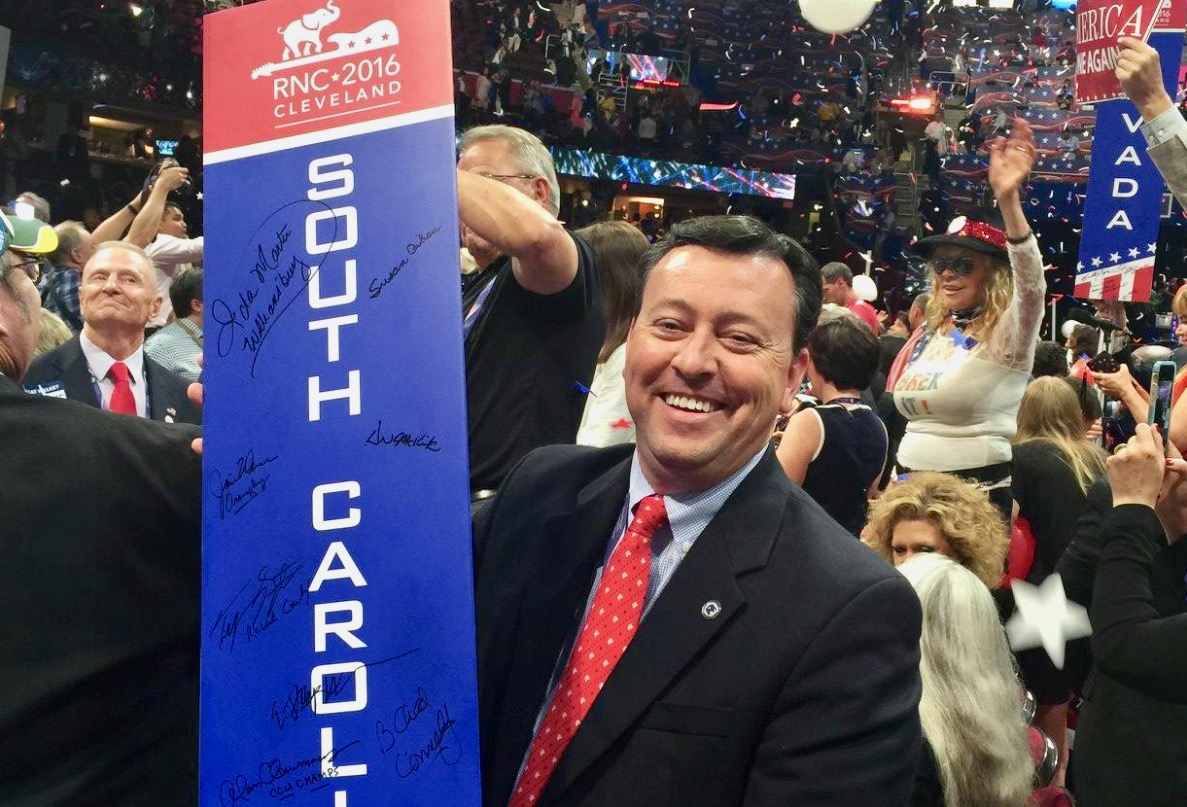 Right-wing Republicans in Horry county, South Carolina are mulling a “censorship” resolution against the chairman of the state party after he called a group of grassroots conservative activists “lepers” last week – the latest front in an increasingly caustic civil war within the party.

I am guessing these Horry officials meant to say they will be mulling a “censure” resolution … but either way, the effort is indicative of the extent to which SCGOP chairman Drew McKissick has enraged conservatives with his recent comments.

In fact, I am told at least three other counties are mulling similar censure resolutions condemning McKissick for his remarks … including Anderson, Laurens and Greenwood counties.

McKissick issued his divisive and ill-advised rejoinder after the top three elected leaders of the Greenville county Republican party jointly resigned their offices last Thursday – citing their inability to work with the grassroots conservative activists currently driving the direction of the organization.

Is that the real reason these officials stepped down, though?

Readers of this news outlet will recall, though, that the resignations of Greenville party chair Jennifer Black, vice chair Stacy Shea and state executive committeeman Randy Page came just 48 hours after a party committee (appointed by Black) uncovered a questionable “ballot harvesting” operation that helped these three leaders prevail over their right-wing rivals in a county leadership election back in April.

The ballot harvesting operation – which critics say “rigged” the vote for Black, Shea and Page – was allegedly subsidized by anonymous donors to the state party, and it may have involved one of the SCGOP’s top field operatives (as well as several elected officials).


Whatever prompted the resignations, McKissick unloaded on conservative activists affiliated with the grassroots group mySCGOP.com and the Greenville tea party – saying they were going to turn the Greenville GOP into “a complete dumpster fire” and a “leper colony.”

McKissick’s comments were made in an interview with reporter Jamie Lovegrove of The (Charleston, S.C.) Post and Courier.

According to a draft of the Horry county resolution obtained by this news outlet, McKissick “has publicly insulted and disenfranchised Republicans within the Greenville GOP, and by proxy others within the SCGOP” not only by his comments but also by his stated desire to “unilaterally dissolve” the Greenville county Republican party.

The resolution accused McKissick of being in violation of party rules, stating that he is “not permitted to unilaterally decide to make moot a duly elected county party nor establish or alter other Republican organizations without (approval from) the state executive committee.”

Horry county leaders will vote on the resolution at their meeting on Monday evening (July 12, 2021).

The fact that Horry county is the first out of the gate with a resolution censuring McKissick is not surprising. After all, the same activists which pulled off the recent “MAGA coup” in Greenville were instrumental in pulling off a similar takeover of the Horry county Republican party back in the spring.

Critics of this new right-leaning grassroots movement have actually referred to the Horry county “coup” as part of a takeover of the SCGOP by adherents of QAnon – an amorphous assemblage of online provocateurs that has become a catch-all for right-wing conspiracy theories (and theorists).

Their basis for this assertion? The fact that newly elected Horry county executive committee member Tracey Beanz was one of the conservative activists credited with helping QAnon “go mainstream” in 2017.

Activists affiliated with mySCGOP.com campaigned hard against McKissick earlier this year, but the two-term incumbent handily defeated famed First Amendment lawyer Lin Wood in May – thanks in no small part to a trio of endorsements from former U.S. president Donald Trump.

Trump’s support of McKissick was not surprising considering the SCGOP chairman backed his play in calling off the 2020 “First in the South” presidential primary – but it was surprising given McKissick’s unprecedented meddling in primaries in behalf of fiscally liberal GOP candidates.

Wood has continued to be a thorn in the side of McKissick and other left-leaning “Republicans” since the election … and the mySCGOP.com movement is clearing gaining momentum at the grassroots level.

My news outlet will continue to follow the SCGOP civil war very closely as we approach the 2022 South Carolina GOP primary elections and as machinations escalate in connection with the 2024 “First in the South” primary.