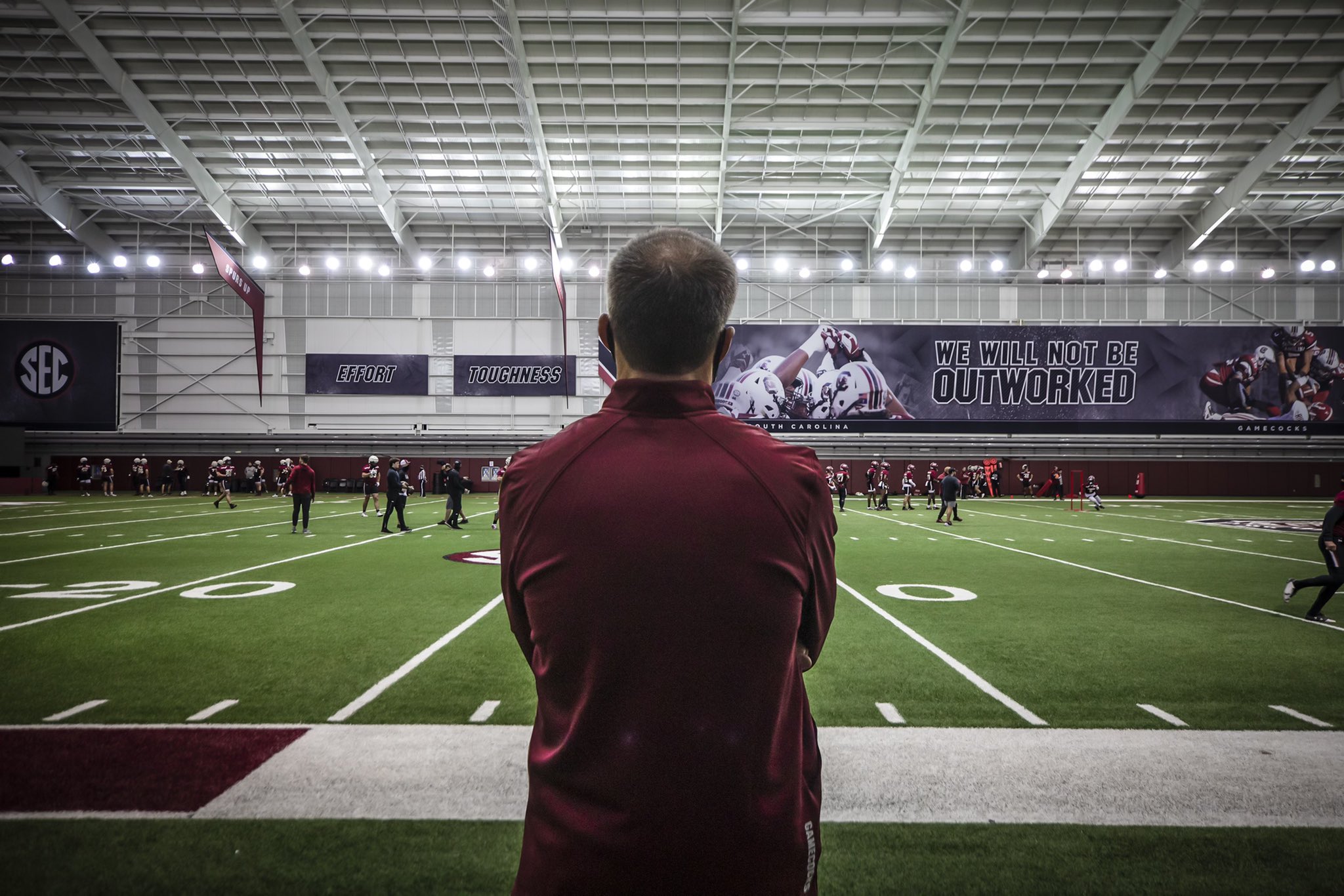 New University of South Carolina head football coach Shane Beamer has begun assembling the coaching staff that he hopes will help him exceed expectations as the Gamecocks begin their second rebuilding job in five years.

Curiously, Beamer has chosen to retain multiple coaches from the staff of former head coach Will Muschamp – who presided over a disastrous final two seasons in Columbia, S.C.

Most significantly, Beamer has retained offensive coordinator Mike Bobo – who hardly distinguished himself during his first season at the helm of the Gamecock offense. South Carolina averaged only 355 yards per game – No. 10 in the Southeastern Conference (SEC) and No. 96 nationally. The Gamecocks fared little better in scoring – averaging 23.5 points per game. That also ranked tenth-best in the conference and No. 96 in the country.

Additionally, Bobo went 0-3 as the Gamecocks’ interim head coach after Muschamp was fired.

Are we surprised to see him coming back? Absolutely …

Beamer is also retaining defensive line coach Tracy Rocker and outside linebackers coach Mike Peterson – even though South Carolina ranked next-to-last in the SEC in both sacks and tackles for loss in 2020.

Why are they back? Good question …

The other assistant coach retained by Beamer is Des Kitchings, who like Bobo and Rocker was in his first season on the Gamecock staff in 2020. This hire makes a little bit more sense seeing as Kitchens can claim some credit for the explosive season enjoyed by sophomore tailback Kevin Harris – who finished second in the SEC with 1,138 rushing yards.

In addition to the four returning coaches, Beamer announced the hiring of third-year Tennessee offensive line coach Will Friend to the same position with the Gamecocks.

What is Friend’s connection to South Carolina? He spent three seasons as offensive coordinator under Bobo during the latter’s tenure as head coach at Colorado State University.

Which means this was likely Bobo’s hire …

Still, Beamer is excited to have him on the Gamecock staff.


“Will has had a history of developing excellent offensive linemen during his coaching career,” Beamer said. “He knows what it takes to compete in the SEC and brings a drive and energy that we want on our staff.”

Beamer also announced the hiring of former Ball State head coach Pete Lembo to lead the Gamecocks’ special teams – bestowing upon him the title of assistant head coach. In addition to fifteen years of head coaching experience, Lembo has spent the past five seasons coaching special teams at Maryland, Rice and Memphis.

Before that he was a graduate assistant on former Gamecock head coach Lou Holtz’s staff … and before that he was a backup quarterback for the Gamecocks, with his claim to fame being a fourth-down fade pattern touchdown to wide receiver Jermale Kelly that gave the Gamecocks a 23-19 victory over previously undefeated Mississippi State in 2000.

Beamer – who has never been a collegiate head coach (or even a coordinator) – gushed over his new hires.

“I am excited about the quality of coaches that this staff has,” Beamer said in a statement. “I am looking for coaches who teach and connect with our players, who have boundless energy to recruit young men to our outstanding university and program, and who do it the right way.”

He may also be looking for coaches he can afford … as South Carolina is stuck paying Muschamp a staggering $15.5 million over the next four years as part of his buyout, which was negotiated by embattled athletics director Ray Tanner.

Beamer is being paid $13.75 million over the next five seasons, by comparison.


Beamer still has to name three members of his staff – including a defensive coordinator. Also, all of the assistant coaches he has hired must have their deals approved by the much-maligned South Carolina board of trustees – which is always an adventure.

What do we think of his selections so far?

Beamer is retaining three coaches who did absolutely nothing to justify keeping their jobs and bringing on one new hire who (on paper anyway) represents a downgrade.

On the plus side? His new special teams coach appears to be a solid hire – and we believe Kimrey has potential as a first-time college assistant coach.

Bottom line? The 2021 Gamecocks are shaping up a lot like that old Gin Blossoms lyric – “if you don’t expect too much from me, you might not be let down.”