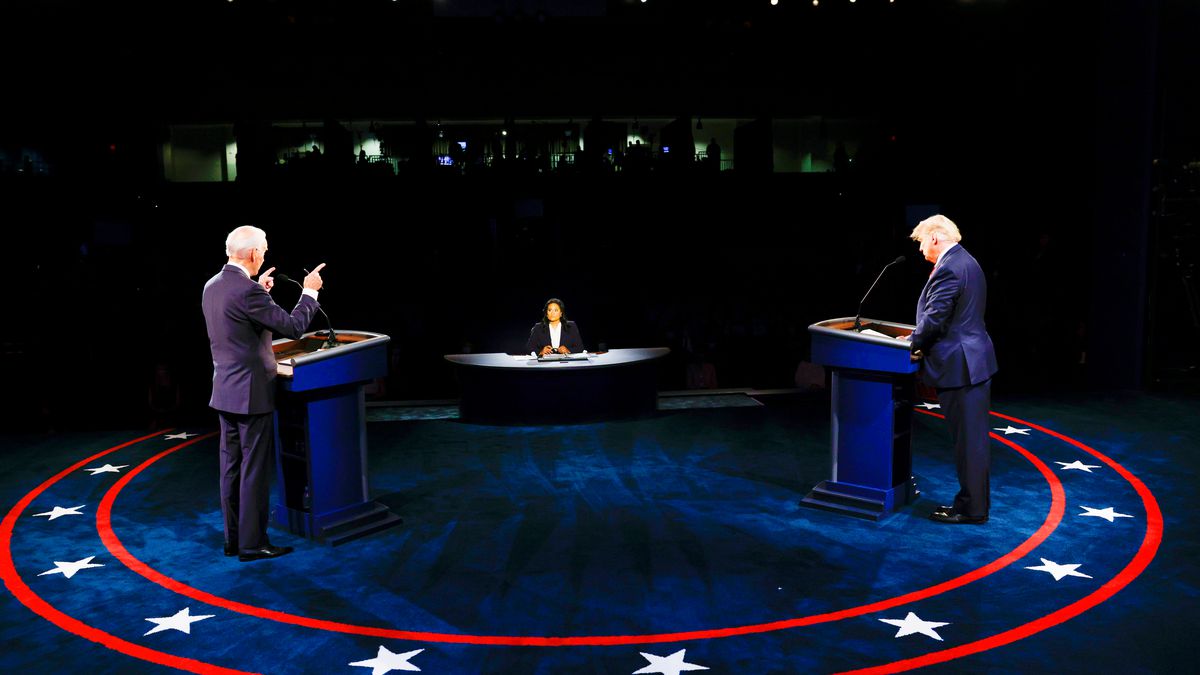 After a chaotic and acrimonious initial exchange, U.S. president Donald Trump and Democratic presidential nominee Joe Biden engaged in a largely civil exchange of ideas during their second and final debate on Thursday evening.

Did the 96-minute “firework-free” forum – held in Nashville, Tennessee and moderated by Kristen Welker – change anyone’s mind, though?

And with nearly 50 million votes already cast … how significant was the exchange in the grand scheme of things?

Also, it was tremendously disappointing to see libertarian presidential nominee Jo Jorgensen – our 2020 choice – excluded from yet another debate.

Jorgensen panned the proceedings as “another national farce,” although this time the two major party nominees kept it comparatively calm and credible.

“Americans witnessed a much less raucous, more coherent, and more substantive – in other words, a more normal – discussion than the first debate just three weeks ago,” Democratic pollster Doug Schoen noted in a column posted on Fox News.

“At least this dialectic was not epileptic,” observed Michael Every of Rabobank.

Not surprisingly, the debate focused much of its attention on the coronavirus pandemic that has ravaged the global economy over the last eight months. Trump defended his administration’s handling of the virus, which has purportedly claimed 220,000 lives.

According to the president, Covid-19 was “modeled” to kill 2.2 million Americans and that his administration has been focused on shutting down “the virus, not the country.”

Trump also talked about his own experience with the virus.

“I was in for a short period of time and I got better very fast,” Trump said, touting the treatment he received and the likelihood of an impending vaccine.

Biden fired back that Trump’s response to Covid-19 – which included cutting off travel to and from China in early February – was “xenophobic fear-mongering.”

“The president has no plan,” Biden said. “No comprehensive plan.”

“We can’t lock ourselves up in a basement like Joe does,” Trump said. “He has the ability to lock himself up. I don’t know – he’s obviously made a lot of money someplace.”

That was a double shot … with Trump hitting Biden on his support for draconian societal shutdowns implemented in response to Covid-19 as well as the latter’s escalating Ukrainian scandal, in which Biden been accused of advocating on behalf of his son’s business interests abroad.

And perhaps his own interests …

This scandal – which the mainstream media has ignored and social media has shamelessly attempted to censor – has Biden on the defensive in the final two weeks of the race.

It revolves around a trove of emails and other data contained on a laptop left at a Delaware computer repair shop. The data provided details on a host of Hunter Biden’s business dealings – including one particular venture with a Chinese firm in which a ten percent take was allegedly set aside for the “big guy.”

“You were getting a lot of money from Russia, they were paying you a lot of money and they probably still are,” Trump said to Biden, referring to the latest revelations in the scandal. “But now with what came out today – all of the emails … the horrible emails of the kind of money that you were raking in, you and your family. And Joe you were vice president when some of this was happening.”

“I think you owe an explanation to the American people,” Trump added.

Biden issued a blanket denial in response to Trump’s goading.

“I have not taken a penny from any foreign source ever in my life,” he said, claiming Trump had a “secret bank account with China.”

“I have not taken a single penny from any country whatsoever – ever,” Biden added.

The Democratic nominee also used the exchange to demand that Trump release his tax returns, something the GOP incumbent has refused to do.

“They separated them at the border to make it a disincentive,” Biden claimed, adding that caging children ” violates every notion of who we are as a nation.”

“Who built the cages, Joe?” Trump fired back, referring to policies implemented under Biden and former president Barack Obama.

In fact shortly after the debate, the House GOP judiciary committee tweeted out a picture of Obama’s homeland security director Jeh Johnson touring cages at the southern border.

Trump and Biden also debated the issue of race – with Trump saying he had done more for black Americans than any president since Abraham Lincoln.

Trump also slammed Biden for “doing nothing in 47 years except (passing) a crime bill that was detrimental to black Americans.”

“It’s all talk and no action,” Trump said in reference to Biden, who has made several gaffes during the current campaign on race-related issues and whose segregationist past looms large with many black voters.

Biden pushed back hard against Trump’s characterization of his record on race.

“Abraham Lincoln here is one of the most racist presidents we’ve had in modern history,” Biden said, referring to Trump’s invocation of the sixteenth president. “He pours fuel on every single racist fire – every single one.”

Many conservative media outlets attempted to portray Biden’s remark as being critical of Lincoln, but it was clearly a reference to Trump’s prior comment.

On the environment, Biden stumbled badly when he tried to walk back his previously stated opposition to hydraulic fracturing – a.k.a. “fracking,” which is a method of extracting natural gas and petroleum from bedrock formations. Fracking has driven the natural gas revolution in our nation – which has reduced our reliance on foreign energy sources and dramatically reduced carbon emissions.

Biden claimed he never opposed fracking and challenged Trump to play a tape of him saying he did.

Trump was more than up for that challenge …

Trump also pushed Biden into an admission that could cost him dearly in the swing state of Pennsylvania.

“Would you close down the oil industry?” Trump asked Biden.

“I would transition from the oil industry, yes,” Biden responded.

According to a January 2020 study (.pdf) from the U.S. Chamber of Commerce, a ban on fracking would cost Pennsylvania 600,000 jobs and roughly $261 billion over its first five years of implementation.

“It would be devastating for every aspect of our state,” Pennsylvania chamber of commerce leader Gene Barr said. “A ban on fracking would risk hundreds of thousands of direct and indirect jobs, affecting income and energy prices for Pennsylvanians. It would also jeopardize all of the programs and services that have benefitted from the state’s natural gas impact tax funds.”

“Biden is literally handing Pennsylvania to Trump with those answers on energy,” Newsweek’s Josh Hammer noted.

Nationally, a fracking ban would kill 5.9 million jobs in seven states and deprive the economy of $7.1 billion by 2025.

Miss the debate? Here is the exchange in its entirety …

Who do you think won the debate? Be sure to vote in our poll and post your thoughts in our comments section below …

Who won the second 2020 presidential debate?