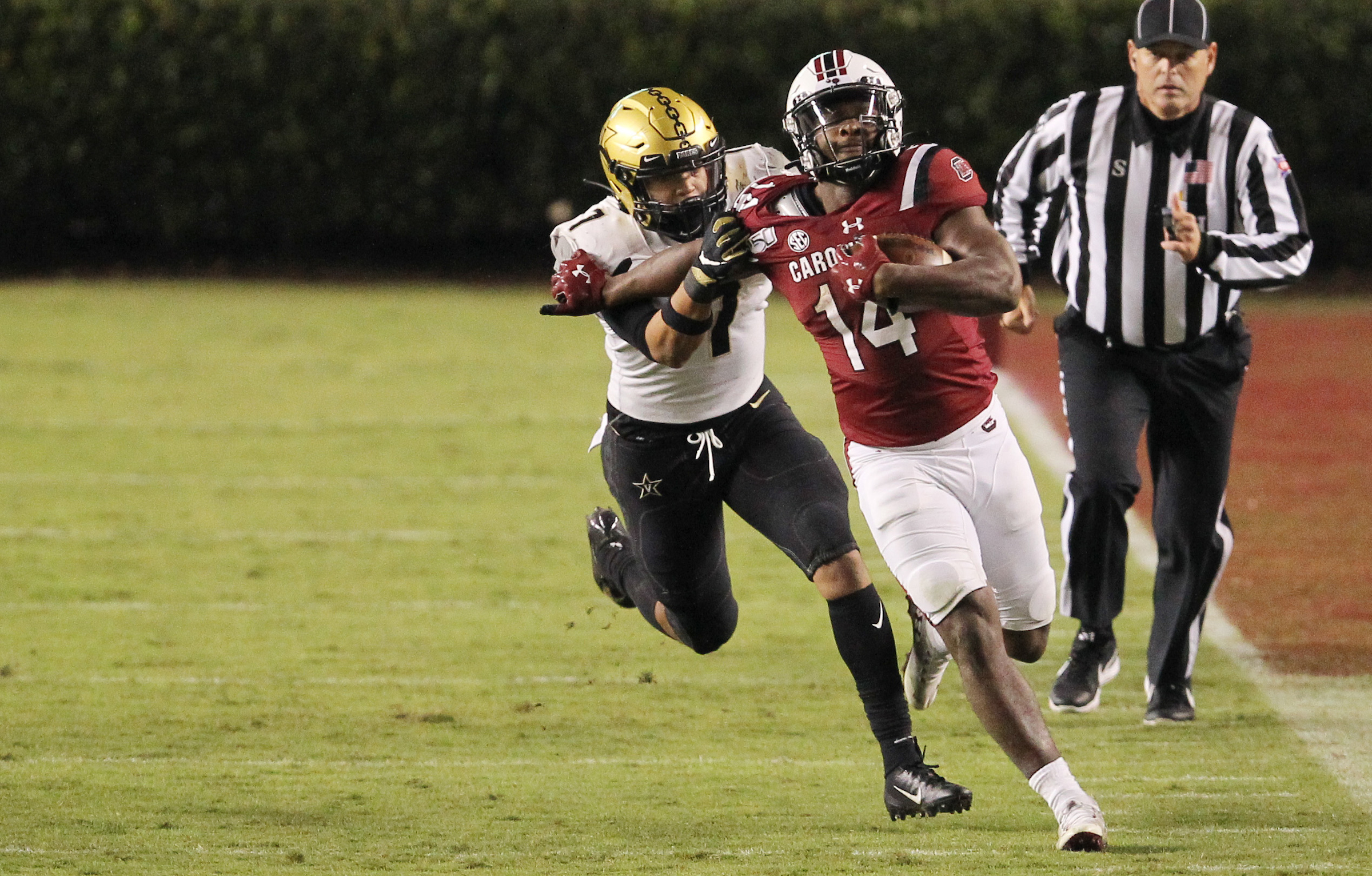 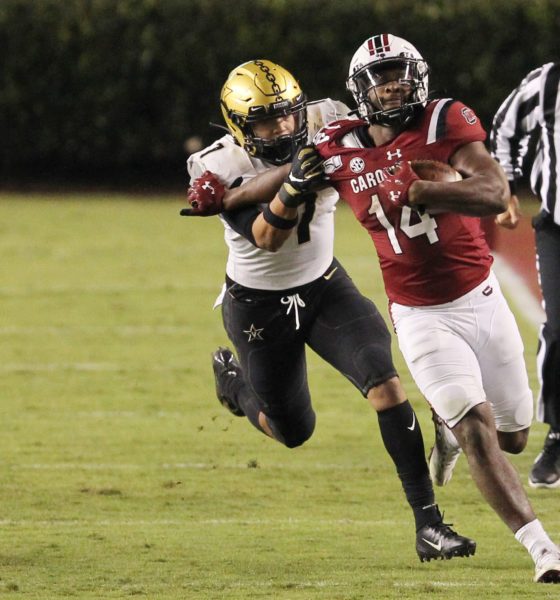 Will Muschamp’s winless squad looks for a momentum-building victory …

After a head-scratching 38-24 loss to the third-ranked  Florida Gators on Saturday, October 3, 2020, the winless South Carolina Gamecocks football team will return to action for their third game of the season on Saturday against SEC East rival Vanderbilt.

Kickoff is set for 12:00 p.m. EDT on Saturday at Vanderbilt Stadium in Nashville, Tennessee. The SEC Network will televise the contest nationally, with Dave Neal calling the action, DJ Shockley providing color commentary and Dawn Davenport reporting from the sidelines.

The Gamecocks are looking to end their three-game conference losing streak and five-game winless streak dating back to last November’s 24-7 victory over the Commodores. Under fifth-year head coach Will Muschamp, South Carolina has won just two of their last six games in conference play.

Following the Gamecocks’ infamous 28-0 Belk Bowl loss to Virginia on December 31, 2019, Muschamp’s two-year, more than $8 million dollar contract with the University of South Carolina has labored to produce a 4-10 overall mark – including a 3-7 record against conference opponents.

Other than a shocking 20-17 upset over then-No. 3 ranked Georgia on October 12, 2019 “Between the Hedges” at Sanford Stadium in Athens, Georgia, the last triumph for the Gamecocks was its victory over Vanderbilt at Williams Brice Stadium on November 2, 2019.

With a revamped offense operating under the guidance of first-year coordinator Mike Bobo – and a list of opponents that have showed some signs of weakness at the beginning of the COVID-shortened season – there’s a chance the Gamecocks could pick up the pieces and finish at .500 (potentially earning a bowl bid).

But that likelihood has diminished after back-to-back losses against Florida and No. 14 Tennessee.

Another? The Gamecocks wide receiving corps – which has developed a habit of dropping on-target throws from graduate transfer quarterback Colin Hill. South Carolina had six passes slip through its receivers fingers in the first half against Florida, Muschamp admitted.

Receivers Josh Vann, Xavier Leggett and tight end Nick Muse dropped passes that could have sustained critical possessions for the Gamecocks – but those drives instead ended in consecutive punts.

“We didn’t catch the football very well,” Muschamp said in his postgame press conference following the Gamecocks’ third straight loss to the Gators. “Obviously, (against) an offense like that – if you don’t answer, you put yourself in a hole.”

South Carolina clearly has the talent and the tools to stay competitive against ranked opponents like Florida, Teneesee and Georgia – but mistakes such as these have continually killed their chances.

For Muschamp (above), it’s a familiar theme: “So close… yet so far away.”

Another unsettling statistic for the Gamecocks is pass defense – which is allowing an average of 8.7 yards per attempt so far this season. That number has skyrocketed from the 5.5 yards per attempt allowed between 2016 and 2019.

The good news for the Gamecocks is that they face a Vanderbilt squad under seventh-year head coach Derek Mason which was eviscerated 41-7 by LSU last weekend at Tiger Stadium in Baton Rouge.

For South Carolina fans unhappy with Muschamp’s losing streak against conference opponents, Vanderbilt’s is even worse – totaling six losses in a row. The Commodores last SEC win came against Missouri on Oct. 19, 2019.

That is largely due to Vanderbilt’s offense, which has been horrendous in league play this season. The Commodores averaged 8.5 points per game in season opening losses to Texas A&M and LSU. The ’Dores have 19 overall points, although two of those were scored via a defensive safety.

Commodores’ true freshman quarterback Ken Seals (above) has completed 31 of 54 passes for 263 yards, two touchdowns, and four interceptions during his brief stint in the Music City – but he’s been on the run from defenders almost the entire time. In last week’s 34-point loss to the defending national champions, Seals was hurried eight times, sacked twice, and recorded two interceptions in just 25 passing attempts.

The Commodores could keep things competitive against the Gamecocks if they can get their defensive line going. South Carolina allowed four sacks apiece against Florida and Tennessee, and the Commodores forced three defensive turnovers against the Aggies – largely thanks to sound play in the trenches.

However, if South Carolina can get any form of offensive production going, it should be smooth sailing for the Gamecocks. While his receivers have had their issues, quarterback Colin Hill has kept the Gamecocks competitive against ranked competition, tossing 53 of 86 passes for 502 yards, three touchdowns, and one interception.

His favorite target is speedy 5-foot-10 flanker Shi Smith, who has hauled in 22 receptions for 225 yards, and two touchdowns.

The Gamecocks also improved their rushing performance in their second contest against the Gators, with sophomore Kevin Harris contributing 100 yards on 22 carries. Fellow sophomore Deshaun Fenwick accounted for 32 yards, averaging 5.3 yards per carry on six attempts.


Harris and Fenwick could prove to be a dynamic duo down the stretch for South Carolina if the Gamecocks can get better protection up front. So far, though, South Carolina is averaging just 2.9 yards per attempt on the ground and its 103 yards per game average ranks No. 66 out of 74 FBS programs.

Still, with 11 straight wins against the Commodores (coming by an average of 11.2 points per contest), Saturday’s showdown against Vanderbilt could provide the perfect opportunity to get the Gamecocks back in the win column. A swing of positive momentum could give the Gamecocks a boost as they look ahead to a brutal three-game stretch against SEC West foes No. 13 Auburn, No. 17 LSU and No. 21 Texas A&M.

But with so many problems to address – including terrible clock management the final minutes of the fourth quarter against Florida – it’s first things first for these Gamecocks.

Odds makers like the Gamecocks’ chances against Vanderbilt. According to OddsShark.com, South Carolina is a 13.5-point favorite on the road in Nashville – the first time the Gamecocks have been picked to win a game this season. Meanwhile, ESPN’s matchup predictor currently gives South Carolina a 79.7 chance at victory.