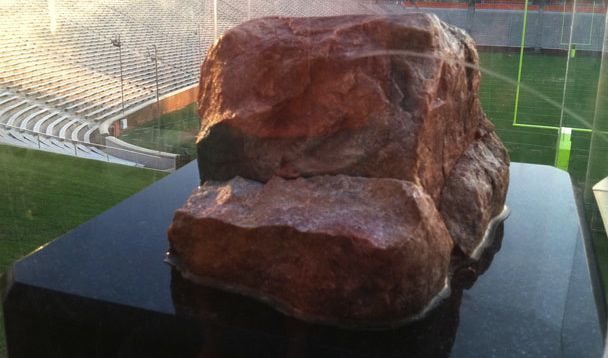 According to WYFF TV 4 (NBC – Greenville-Spartanburg, S.C.), an out-of-state minor has been named as a person of interest in the recent attack on Howard’s Rock – the icon of the Clemson University football program.

Micah Rogers, 18, of Pisgah Forest, N.C. was arrested and charged with one felony count of malicious injury to personal property valued at more than $2,000. He was also charged with a misdemeanor trespassing violation.

The vandalism occurred at Clemson’s Memorial Stadium (a.k.a. Death Valley) in early June but wasn’t made public until nearly two weeks later.

This week, Clemson University cops released surveillance video and images of a white pick-up truck arriving at – and then leaving – the east side of Death Valley on June 2, around the time the rock was believed to have been damaged. The truck is reportedly registered to Rogers’ father.

No word yet regarding Rogers’ alleged motive – assuming he had one. According to police, his home was full of Clemson memorabilia and social media posts would seem to indicate he is a fan of the Clemson football team.

The rock – named after legendary coach Frank Howard – is an integral part of the Tiger football team’s pre-game ritual. Clemson players and coaches rub it for good luck before running down the hill into Death Valley, the team’s 82,000-seat stadium. In fact they’ve done so ever since 1966, when Howard’s team came back from an 18-point deficit to beat Virginia 40-35 in that year’s season opener.

“If you can’t give me a 110 percent than keep your filthy hands off my rock,” Howard is said to have told his players.

A gift from Howard’s longtime friend, Samuel C. Jones, the rock was initially used as a doorstop in the head coach’s office. It was later placed on a pedastal inside Memorial Stadium by Clemson booster Gene Willimon.