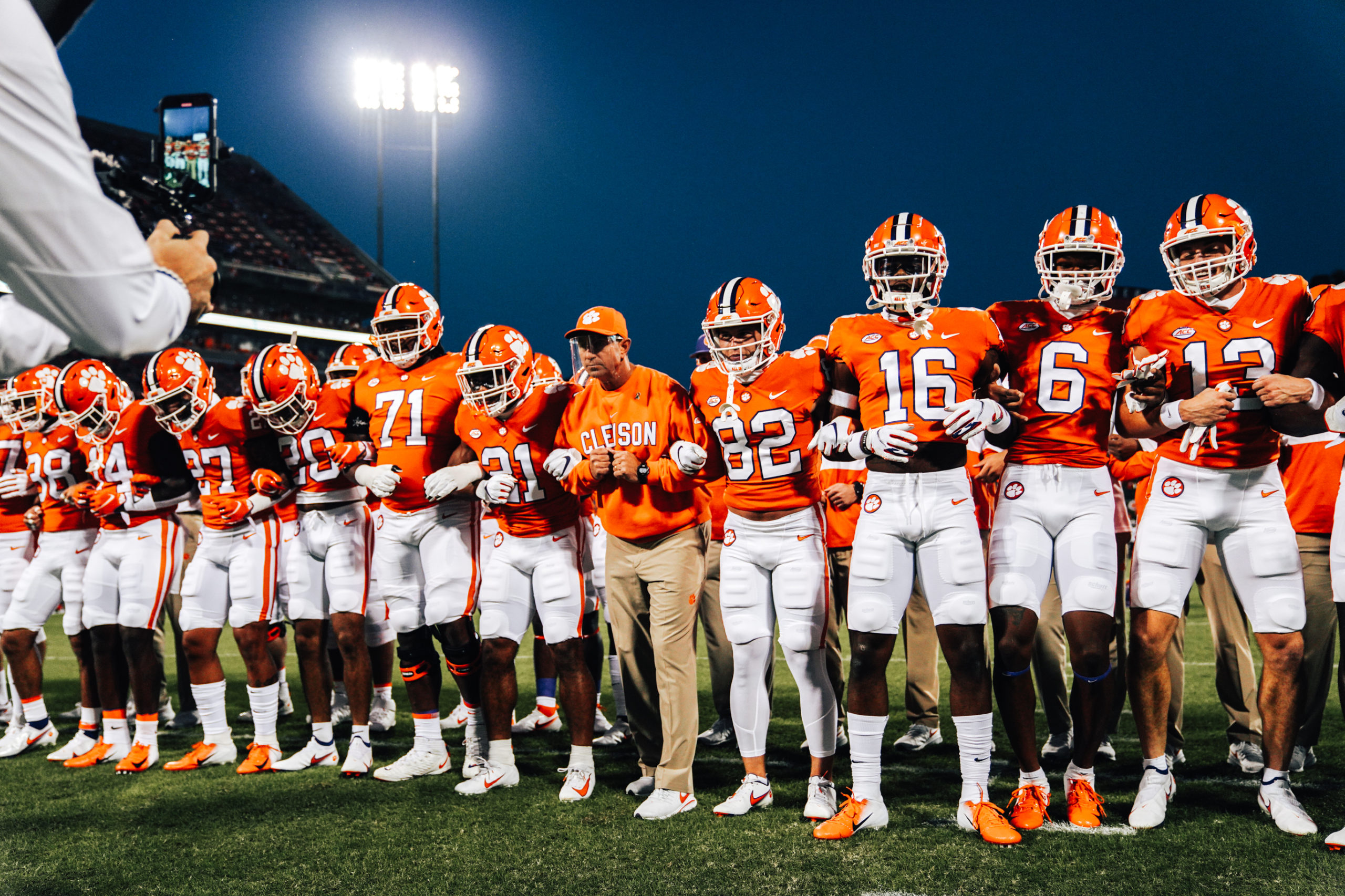 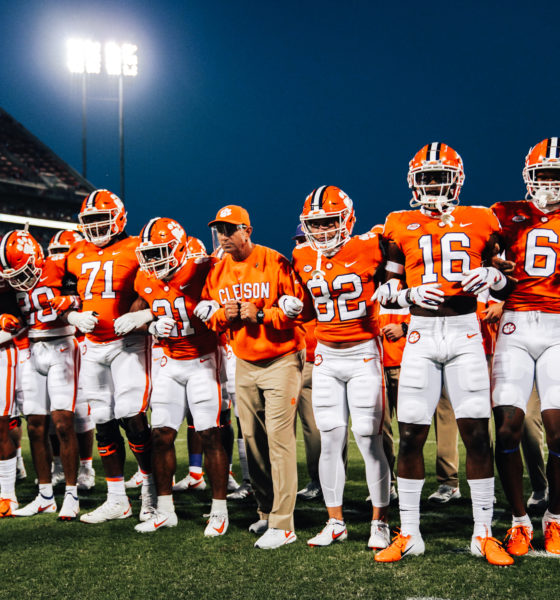 After trouncing Wake Forest, The Citadel and Virginia by a combined score of 127-36, 13th-year head coach Dabo Swinney and the top-ranked Clemson Tigers will play their fourth game of the season against the No. 7 Miami Hurricanes on Saturday, October 10, 2020.

Kickoff is set for 7:30 p.m. EDT at Memorial Stadium (a.k.a. “Death Valley”) in Clemson, South Carolina. ESPN will handle the broadcast, with Chris Fowler on play-by-play, Kirk Herbstreit providing color commentary and Allison Williams reporting from the sideline.

The Tigers have played a dominant brand of football in the Atlantic Coast Conference so far this year, but with fifth-ranked Notre Dame, No. 7 Miami, and No. 8 North Carolina rounding out the top ten in the latest AP Top 25 poll, it has become evident that Swinney and the Tigers will need to knock off some tougher competition in order to claim their sixth straight conference championship and earn a sixth consecutive trip to the College Football Playoff (CFP).


Such suspicion is warranted considering the Tigers have won their last two matchups with the Hurricanes by a combined score of 96-3.

In 2015, Miami lost to then No. 6 Clemson 58-0 – marking the end of the Al Golden era at Hard Rock Stadium. In the latest installment of the rivalry, former head coach Mark Richt’s team was thrashed by the Tigers to the tune of 38-3 in the ACC Championship Game at Bank of America Stadium in Charlotte, North Carolina, on Dec. 3, 2017.

However, the new and improved Hurricanes have rolled out to a hot start this season under second-year head coach Manny Diaz – defeating the University of Alabama at Birmingham (3-1), Louisville (1-2), and Florida State (1-2) by a combined score of 130-58 in their first three contests.

Still, the Tigers enter this game as 14-point favorites at home – according to the latest line from OddsShark.com. And ESPN’s matchup predictor gives Swinney’s team an 86 percent chance of victory.

Driving Clemson for the third straight year is junior quarterback Trevor Lawrence – a 6-foot-6, 220 pound athlete from Cartersville, Georgia. As he campaigns for the Heisman Trophy (and the prospect of being chosen first overall in the 2021 NFL Draft), Lawrence has completed 55 of his 75 passes for 848 yards and seven touchdowns so far this season.

He has only been picked off once …

In his latest act against Virginia, Lawrence was 25 of 38, completing 65.8 percent of his throws for 329 yards, three touchdowns and no interceptions.

Lawrence is accompanied by two-time ACC player of the year Travis Etienne, who is averaging 6.2 yards per carry from the tailback position. The 5-foot-10, 205 pound senior has 243 total yards and two rushing touchdowns so far this season – extending his dominating run atop both school and conference record backs.

When Etienne needs a spell, Lyn-J Dixon is another solid option for Clemson at the backup running back position – amassing 1,192 yards and 11 touchdowns during his career with the Tigers.

While Clemson hasn’t faced a ranked opponent so far in 2020, this primetime matchup on Saturday night should allow the Tigers to showcase their top weapons against a Miami defense that has struggled – including giving up 34 points two weeks ago to Louisville.

The Hurricanes rank No. 7 in the ACC in total defense (giving up 477.0 yards per game) and pass defense (230.3 yards per game). They are No. 10 in the conference against the run, allowing 146.7 points per game. In other words, expect the Tigers to have success on the ground and through the air.

However, Clemson’s defense – which allowed 23 points to Virginia – could have its hands full with the D’Eriq King and the Miami offense, which is averaging 43 points per game under its star transfer quarterback.

Miami offensive coordinator Rhett Lashlee will likely be looking to put together a game plan that utilizes King’s dynamic athletic skillset – especially after dual-threat Virginia quarterback Brennan Armstrong was successful on the ground against the Tigers last week, scampering for 89 total yards.

King – a 5-foot-11, 202 pound graduate transfer from the University of Houston – has proven to be a dynamic threat in the rushing and passing game for the Hurricanes, completing 63 of 94 throws for 736 yards and six touchdowns while also adding 157 yards on the ground in just 28 attempts (averaging 5.6 yards per attempt).

The Canes will likely look to establish a balanced attack featuring King and Cam’Ron Harris, who has been averaging a whopping 8.0 yards per carry. The 5-foot-10, 210-pound junior from Opa-Locka, Florida, has already collected 311 yards and five touchdowns this fall.

This game will pit the ACC’s perennial powerhouse against a school trying to reestablish itself as one of college football’s most dominant programs – not to mention a tête-à-tête of the two most highly touted quarterbacks in the league.

Clemson has posted a staggering 44-2 mark against ACC competition since 2015, and should be well on its way to victory No. 45 if they can execute their offensive game plan and let Lawrence and Etienne make plays.

However, the Tigers must be careful not to underestimate the Canes. A big difference between the 2020 Miami team and the 2017 edition of the Canes that cowered to Clemson in Charlotte? This team has an offense that might actually be able to keep up with the Tigers if a few things go their way …

Another important factor to consider for Miami is that the Hurricanes – who have made creating turnovers a cause célèbre with the famed “turnover chain” – already have six takeaways on the young season. While the Tigers have only lost one fumble and one interception so far in 2020, they will need to focus on protecting the ball in order to keep the Hurricanes at bay.

Miami’s keys to an upset? Scoring early and often, getting those takeaways, playing sound special teams and avoiding miscues when they have the football. If they can do those things, they could become the first conference foe to walk out of Death Valley with a victory since Pitt stunned the Tigers 43-42 on Nov. 12, 2016.

Were Clemson to lose, the Tigers would likely need to run the rest of their schedule in an improved ACC – including a likely trip to the conference championship game in Charlotte at Bank of America Stadium on December 12, 2020. Meanwhile, another win for the Tigers would heighten the anticipation associated with their November 7, 2020 showdown in South Bend against the Irish.