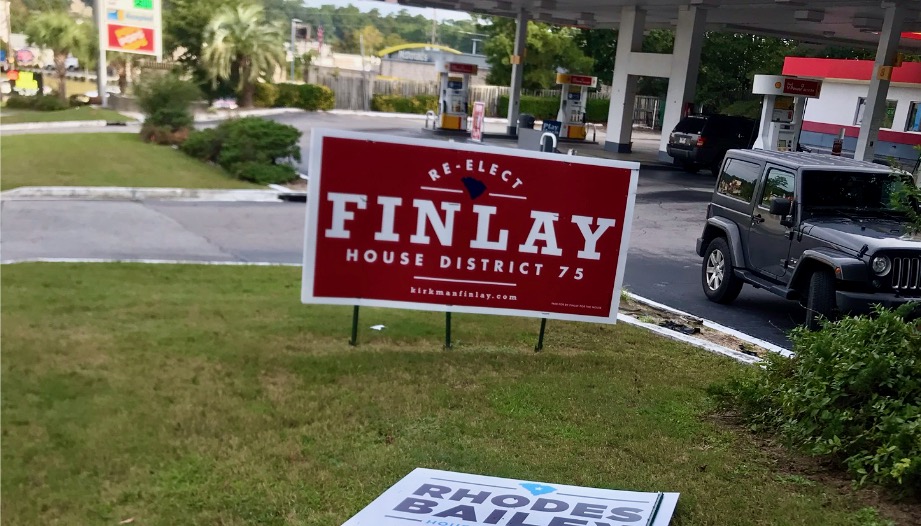 In our recent story on the latest (failed) Democrat attack against state representative Kirkman Finlay, we included a picture of one of the veteran lawmaker’s campaign signs posted outside of a gas station owned by one of his supporters. In the foreground of that image was a sign for Finlay’s opponent in the upcoming race for S.C. House District 75 (.pdf) – a competitive seat in downtown Columbia, S.C.

The latter sign appeared to have been knocked over …

Little did we know the image we posted was going to prompt a federal case … or at least a state one.

According to Richland county court documents obtained by this news outlet, attorney Christopher P. Kenney filed a lawsuit earlier this month on behalf of Finlay’s November 2020 opponent decrying the destruction of this political sign.

“All that remained was the mangled signposts,” Kenney wrote in the complaint, mourning the loss of the campaign sign and demanding compensation for the “financial damage” done to his client by the “violent, unlawful conduct” of a yet-to-be-identified sign defacer.

According to the suit, this conduct “is a danger to the public and toxic to the peaceable conduct that should otherwise govern political discourse in a law-abiding society.”

That’s laying it on a bit thick … of course elections in the Palmetto State always seem to be accompanied by sign drama.

Anyway, according to the lawsuit the “John Doe” who struck down the Democratic political sign violated S.C. Code of Laws § 7-25-210 (A) – which makes it unlawful to “deface, vandalize, tamper with or remove a lawfully placed political sign.”

Here’s an important question, though: Was this sign really lawfully placed?


The gas station in question is owned by a Finlay supporter who has expressly informed his rival’s campaign that they are not permitted to post signs on his property. Accordingly, any sign placed on the property would not qualify as a “lawfully placed” sign.

In fact, its placement could constitute trespassing on the part of Kenney’s client.

As for the lawsuit’s contention that the Democratic sign was placed “in the public right of way fronting (the) gas station,” that assertion is also problematic.

How come? Because the city of Columbia, S.C., Richland county and the state of South Carolina all expressly forbid the placement of political signs within the public right of way.

In fact, the city encourages anyone who comes upon such signs to take them down.

“Any sign, not just political signs, found illegally posted within any portion of a street right-of-way may be removed and discarded,” an August 2015 memo (.pdf) from the city zoning administrator noted – citing a trio of municipal statutes.

Similarly, county ordinances specifically call for signs to be placed “outside of the road right-of-way.”

“Political signs shall not be located within a public road right-of-way,” county code § 26-180 commands.

Finally, S.C. Code of Laws § 57-25-120 makes it “unlawful for a person to display, place, or affix a sign … within a right-of-way,” and calls for violators of this provision to “be fined not more than one hundred dollars or imprisoned for not more than thirty days.”

Seriously … what kind of lawsuit uses as its basis an admission that the person bringing the action broke city, county AND state law?

We get that Democrats are desperate to flip this district … that much has been made abundantly clear over the last few weeks.

But this strikes us as particularly pathetic …

“While we don’t agree with him on every issue, Finlay has been one of the rare common sense voices at the S.C. State House over the past decade – not to mention one of the more effective lawmakers when it comes to challenging failed bureaucracies (including the Palmetto State’s abysmally managed higher education establishment),” we noted in a recent post. “Finlay also impressed us when he stood against the Republican leadership in the chamber as it doled out tens of millions of tax dollars to liberal billionaire David Tepper, owner of the National Football League (NFL)’s Carolina Panthers.”

He also stood against GOP governor Henry McMaster on that issue.

Such independent leadership appears to be why residents of Finlay’s district want his signs in front of their homes and businesses … and why his rival has reduced himself to such ridiculous litigiousness in an effort to get (and keep) his signs up.