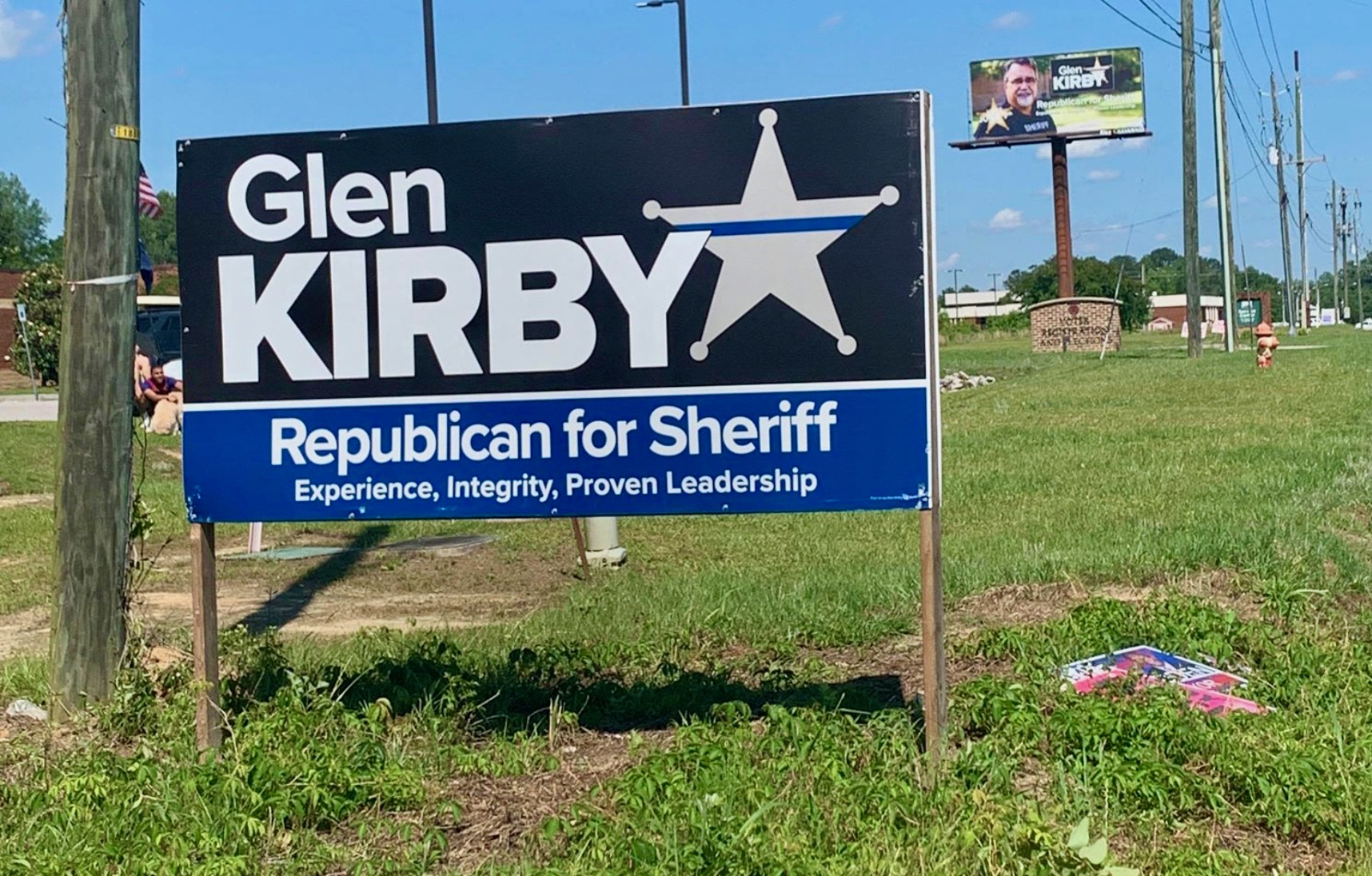 One of the two Republicans running for sheriff of Florence county, South Carolina was accused of personally removing campaign signs belonging to a rival candidate over the Memorial Day weekend – while the woman who questioned his behavior on social media soon found herself on the receiving end of threats from one of his campaign operatives.

Yeah … the drama in this race just won’t stop, will it?

“Just witnessed Glen Kirby himself pulling out Darrin Yarborough yard signs that were around his very large sign,” Camak wrote. “How can I be so sure? Well, his face is plastered right behind it on a billboard. I don’t usually get in the middle of politics, but to witness it with my own eyes is very disheartening. I will never support someone who would do something so dirty.”

Camak, who is not politically active, was quickly rebuked by Stephanie McLaughlin-Rawlinson, one of Kirby’s most prominent supporters. McLaughlin-Rawlinson wrote to Camak and informed her that her family “owns the property you have taken a photo of and spread all over Facebook.”

Actually, Camak just posted what she saw … others spread it on social media.

Be that as it may, though …

“We have only given Glen Kirby permission to put signs there,” McLaughlin-Rawlinson continued. “The others have trespassed and put signs there. I ask you to please remove that post as our family told Glen to remove any other signs on the property.”

Without even waiting for a response, McLaughlin-Rawlinson followed with a not-so-thinly-veiled threat.

“If you would prefer, I can file a trespassing warrant for the other candidates who placed signs on our private property,” she wrote.

Camak responded by telling McLaughlin-Rawlinson that she would remove the picture she took but that she was “leaving my post.”

McLaughlin-Rawlinson was not done venting, though.

Shortly thereafter, she informed Camak that she was “sending my brother-in-law who’s a game warden there now to remove all signs other than Kirby(’s).”

Wait … a game warden? What in the hell does a game warden have to do with anything? Seriously … are deer encroaching upon these signs?

“You may want to let them know that anyone else who places signs there will be ticketed for trespassing,” McLaughlin-Rawlinson continued, accusing Camak of “lying” about the situation and letting her know that she would be consulting a lawyer.

“I’ll have my attorney handle this,” she wrote.

Look, we get that the upcoming primary election between Kirby and former S.C. Highway Patrol (SCHP) trooper T.J. Joye has been caustic (to put it mildly). And we understand certain supporters of these two candidates – as well as the two Democrats who are running – have a lot invested in the outcome of the upcoming primary elections on June 9, 2020.

In fact, we expect to see a sign of this “investment” shortly after Memorial Day when the dark money we hinted at earlier this month comes off of the sidelines for Joye. According to our sources, this cash infusion will slam Kirby for his proximity to the administration of former Florence sheriff Kenney Boone – the veteran lawman who was forced to resign his office earlier this year after pleading guilty to a misconduct charge.

Is that a fair hit? We don’t know … but we have a feeling we will be digging into it soon.

No matter how invested some supporters of these candidates have become, though … it eventually reaches a point of ridiculousness, right?

People in Florence have quite simply taken leave of their senses as it relates to this election … as evidenced by McLaughlin-Rawlinson’s over-the-top responses to Camak. A veteran operative like her should have known better than to react to this situation in such a heavy-handed and accusatory fashion – no matter how in the “right” she believed herself to be.

All she did was make herself (and Kirby) look bad.

Also, a quick “Campaigning 101” pro tip … if a political sign has been placed improperly (and a property owner gives a campaign the green light to take it down), for the love of God don’t send the candidate to personally remove it!

In addition to being atrocious time management, such a move is just asking for the sort of negative publicity the Kirby campaign has brought upon itself with this episode.

Stay tuned … our guess is this is not the last of the drama we will see between now and the June 9 primary elections.