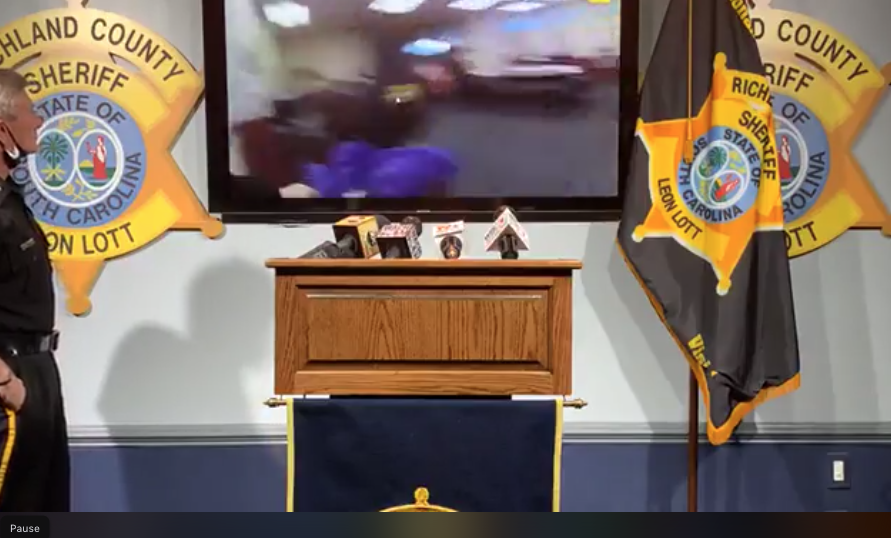 A Richland County Sheriff’s Department deputy who drew criticism for allegedly entering a home illegally and waking up a family at gunpoint over a traffic violation has been fired — although not for that controversial incident.

Instead, Master Deputy Kyle Oliver, 29, was arrested and charged with assault this week for a January incident that was captured on bodycam video (shown below). Richland County Sheriff Leon Lott made the announcement in a press conference Wednesday.

Lott said he wasn’t aware of the incident until someone outside of the department called about it on Monday and he would be looking at policies to ensure something like this doesn’t slip by again.

“There are two problems here..one, the fact that he did it and the second problem is that we that we didn’t find out about it until now,” Lott said.

According to Lott, the woman in the video was arrested on a domestic violence charge on Jan. 7. She was taken back to the Richland County Sheriff’s Department Headquarters. Agitated, she banged her head against the wall so hard that it made a hole, Lott said.

Then, Oliver is seen on video grabbing the woman by the hair and slinging her to the ground.

Lott called the video “disturbing” and said the incident was a “failure on the department.”

“Our checks and balances we have in place did not work,” Lott said. “We wanted to get the criminal part done quickly, now it’s time to do self evaluation and an internal investigation and look at… if there’s a culture issue to be taken care of.”

Lott said “a lot more work will be done” in regards to the incident. Specifically, how did this occur inside a sheriff’s office building with others around who didn’t report it?

He said that the woman who was arrested never reported the incident to the sheriff’s department.

Lott said that the “video doesn’t lie” and that Oliver’s level of force was “unnecessary.”

Asked if the deputy has faced any previous disciplinary actions, Lott said he wasn’t aware of any, but did vaguely mention that he was named in a lawsuit.

Two weeks ago, FITSNews exclusively reported on the lawsuit against Oliver.

Katherine Tompeck and her boyfriend Kevin Morris are suing Richland County, the Richland County Sheriff’s Department, and deputies Kyle Oliver and Michael Caughman for personal injury. They filed the lawsuit in August.

Oliver and another deputy are accused of illegally entering Chapin, South Carolina home with their weapons drawn and waking up a family to arrest a woman for a traffic violation in 2018, according to a lawsuit filed in August.

In the lawsuit, Oliver is not only accused of waking the family up by gunpoint and arresting a woman on a reckless driving charge (which was later dropped), he’s also accused of making “demeaning and inappropriate comments” about the woman to her boyfriend.

Read the details of the lawsuit here.