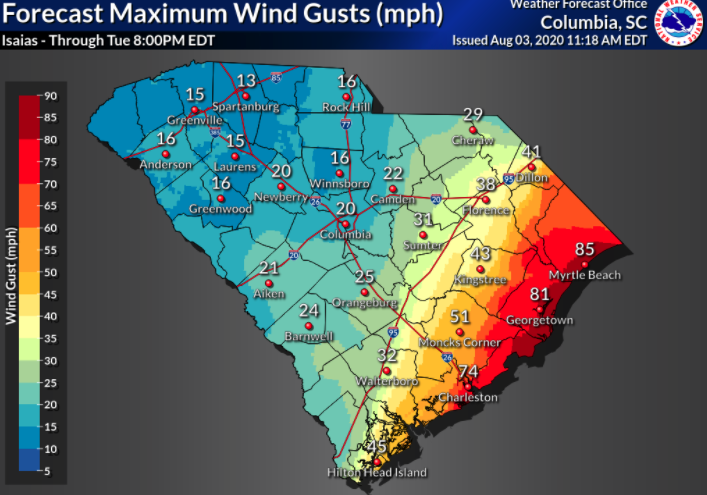 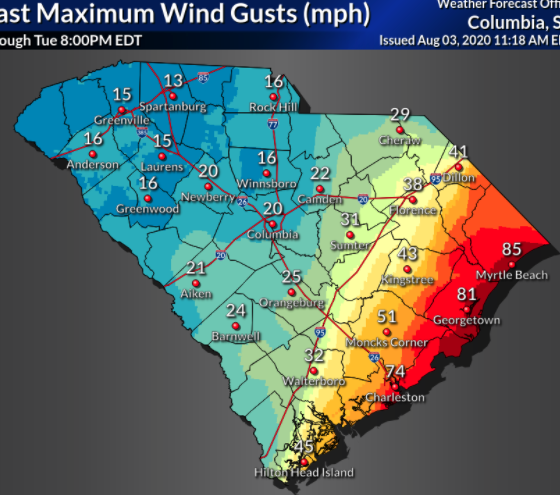 Isaias To Make Landfall As Hurricane Near Myrtle Beach Tonight

Here’s what to expect from Hilton Head to Myrtle Beach.

Forecasters at the National Hurricane Center (NHC) expect Isaias to restrengthen into a hurricane off the South Carolina coast later today and the storm could make landfall in the Myrtle Beach region tonight.

Around 3 p.m., a wind gust of 52 mph was reported at Folly Beach, according to the National Weather Service.

“Some strengthening is forecast later this afternoon or early evening, and Isaias is expected to make landfall tonight at or near hurricane  strength along the coast of northeastern South Carolina or southern North Carolina,” the NHC said in its 5 p.m. update.

The storm system could make a landfall north of Myrtle Beach, around the SC-NC state line.

Finally, the spaghetti models have mostly aligned, here’s a look at the latest track.

Georgetown and Myrtle Beach should expect to see 4-6 inches of rain from Isaias later today.

Here’s a look at total rainfall amounts across the east portion of the state:

On the S.C. coast, the Hilton Head region has the lowest chance of seeing tropical-storm force winds, and those chances increase northward with Myrtle Beach having the best odds.

Isaias has a fairly large footprint with tropical-storm-force winds roughly 125 miles its center.

The coastal Myrtle Beach area could see hurricane-force gusts up to 80 mph most likely later tonight.

There is also a threat of tornadoes, especially in the Myrtle Beach area later this afternoon and evening.

Rip current warnings remain off the entire South Carolina coast as forecasters warn to stay out of the water today.


Here’s a look at Hilton Head around 10 a.m. as Isaias moved closer.

Around 3 p.m., it approved conditions were improving on Hilton Head.

It appears that Charleston, Hilton Head, and Beaufort got lucky and were spared from most of the storm. Stay tined..