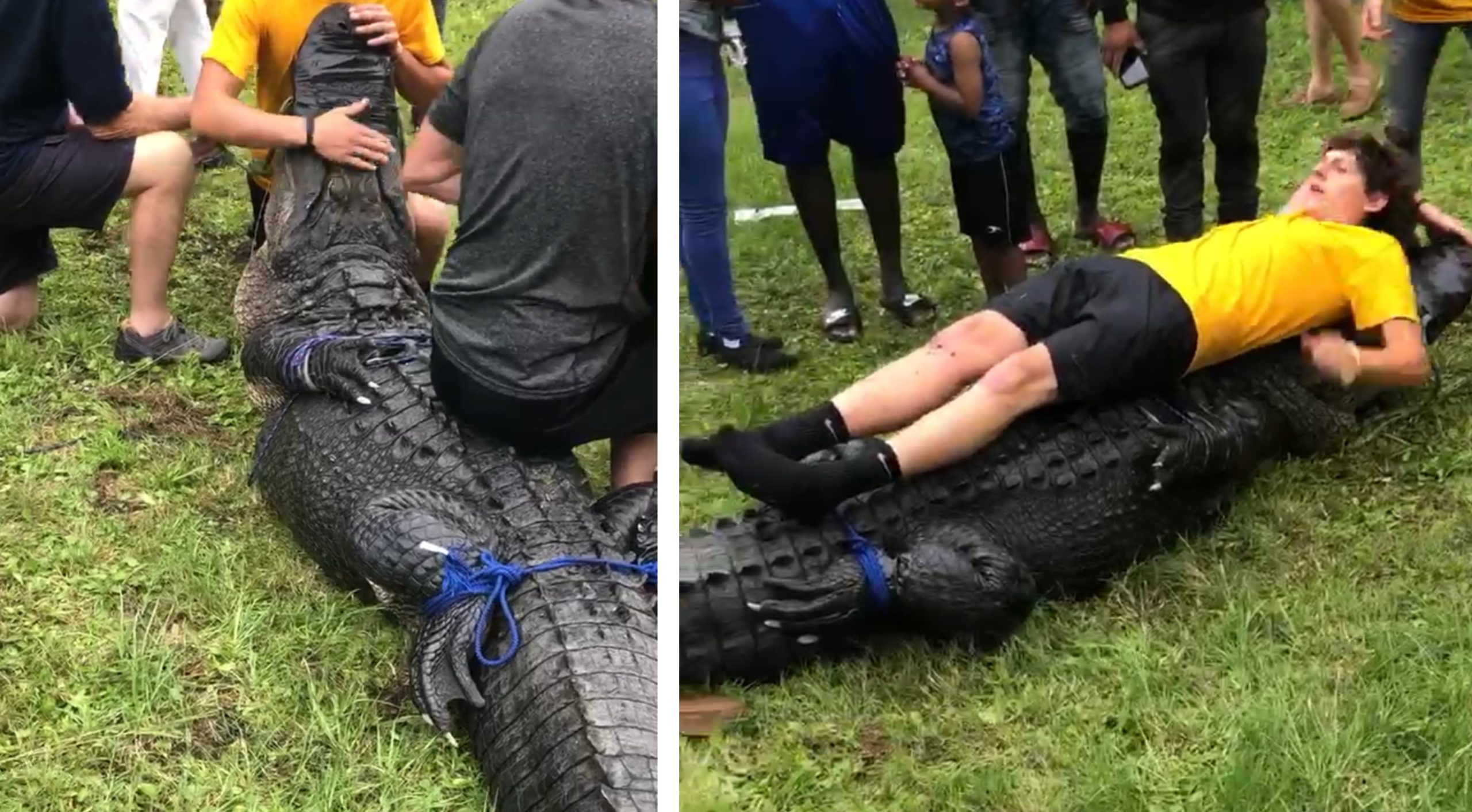 In an incident many are calling animal abuse, a crowd of more than 100 watched animal control agents wrangle a 12-foot alligator and pose for photos with the ancient reptile before it was hauled off to be killed.

Critter Management — an agency that works with the town of Hilton Head under a permit and previously contracted with the South Carolina Department of Natural Resources (SCDNR) — was called to remove a large alligator that was “looking for food” near the Legendary Golf mini-golf course off U.S. 278 on Hilton Head Island, WJCL first reported.

The alligator, which was between 80 and 100 years old, was later killed, WJCL reported.

However, SCDNR Alligator Biologist Morgan Hart told FITSNews that SCDNR representatives told the person who made the complaint what would happen to the alligator if they went forward with removal. Hart sent the following statement:

“A response, independent of SCDNR, was initiated by Legendary Golf and Critter Management. The tag and permit used for the removal of this alligator was not explicitly issued by SCDNR for this animal, but for any alligator deemed a nuisance on various properties located within the Town of Hilton Head. The town of Hilton Head has been issued a Nuisance Alligator Permit and tags to use at their discretion within the town limits.  One of those tags was utilized to legally remove and euthanize this alligator,”

On Thursday evening, after the story was published, Critter Management posted the following statement saying they meant “no disrespect” by the incident.

“We are deeply sorry for offending anyone with the way the capture went down. There were a lot of people nearby, and Joe Maffo has dedicated his life to the safety of our residents by removing these animals once they become a threat to people. It is required by law that captured alligators must be euthanized. Allowing anyone to come close or sit on the animal may have been in poor taste, but our motto has always been to educate the public on the beauty of these animals and perhaps give the public a little better understanding of the sheer power and strength of these animals. We do educational shows all over the island to try and prevent the unnecessary killing of these animals. While to an outsider it may have looked inhumane, it was our intent to share the admiration and respect we have for these animals,” Critter Management wrote in the statement.

“Totally upsetting. Like a damn freak show,” a 35-year Hilton Head Island resident said of the incident on Facebook.

“This is absolutely disgusting. Treating this trapped animal like a circus act before it is taken off to be killed,” another person on Facebook said.

Hart of SCDNR called the actions “irresponsible” in a statement to FITSNEWS.

SCDNR has not responded when asked if any further actions will be taken in regards to this incident.

One tourist filmed 13 minutes of the incident on Facebook Live with the caption “so cool.”

“This is like the best vacation entertainment ever,” the woman says on the video.

“This is awesome,” a child says in the video as the alligator is being pulled out of the lagoon by a team of Critter Management agents.

Iaquinta was running errands at the shopping center next door when he saw a massive crowd gathering outside of Legendary Golf.

Iaquinta said there was about 30 cars and between 100 and 200 people swarmed around the lagoon next to Legendary Golf.

“People were actually running toward the scene,” Iaquinta said.

In the center of the commotion, a massive alligator was laying lifelessly on the ground with its arms and legs hog-tied. Many in the crowd pointed and laughed as the large reptile was sat on, jumped on, poked and prodded.

“What I saw was so degrading to that animal,” Iaquinta said. “It was like they were having a keg party.”

In all directions, people were filming the event, which went on for more than an hour.

As the Critter Management employees were waiting for a truck to arrive to haul away the living alligator, bystanders took turns touching the alligator, posing for photos, and some even climbed on top of its back.

At one point, a Critter Management worker laid on top of the hog-tied alligator.

A Critter Management agent told the Island Packet that the crowd was “totally in the way.”

“It reminded me of a scene in Jurassic Park with people just acting like idiots before they get eaten,” Iaquinta said.

But the alligator was the one that died yesterday.

Why the alligator was killed

SCDNR spokesperson Lucas has previously said that the agents are the ones who make the decision. To be clear, in this story, Critter Management is not an SCDNR agent.

SCDNR agents consider size, aggression and distance traveled, among other factors, when determining how to deal with problem reptiles, Lucas previously said.

Lucas previously said that about five percent of Lowcountry alligators that are ruled as “nuisance alligators” are relocated.

He said agents also look at safety for people and for the gator when determining if an alligator can be relocated.

Agents who kill the alligators are allowed to harvest the meat and hide at a SCDHEC-approved facility and keep the money.

“Alligators have lived in South Carolina ponds, lakes, and marshlands for millions of years,” Morgan Hart of South Carolina Department of Natural Resources perviously told FITSNews. “As more people move to the state and development increases in coastal areas, the likelihood of encountering an alligator also increases.”

NOTE: A previous version of this story called Critter Management state-contracted. Technically, SCDNR issued the alligator removal permits to the Town of Hilton Head, which were then issued to Critter Management. We apologize for the error.

Boeing To Fire Thousands Of Employees, Including South Carolina Workers