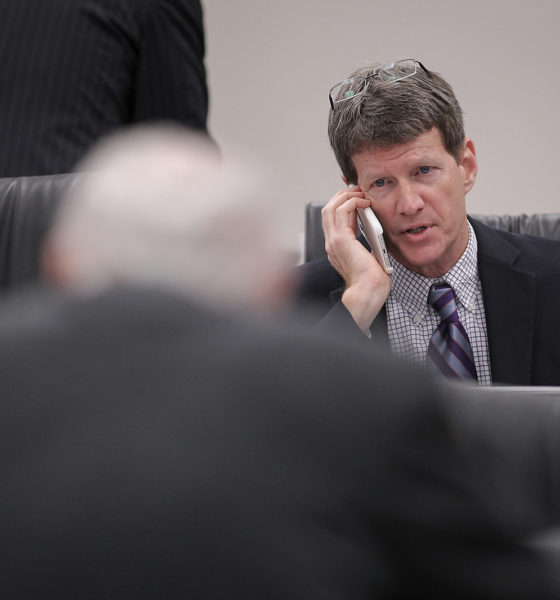 Does he have a good explanation for his conduct?

As he inches closer to a date with his constituents at the ballot box, powerful South Carolina state senator Luke Rankin is receiving some pointed criticism regarding his proximity to a controversial court case involving embattled government-run utility Santee Cooper.

Rankin is also taking incoming fire for his starring role in the broader command economic failure that precipitated the class action lawsuit … NukeGate.

According to David Hucks of MyrtleBeachSC.com, Conway, S.C. attorney and former state lawmaker George Hearn – one of Rankin’s top allies – is set to receive $74 million out of a $520 million settlement earmarked for Santee Cooper ratepayers in connection with the since-abandoned V.C. Summer nuclear generating station expansion.

Is that attorney’s fee estimate accurate?

When we reported on this case back in March, we noted the attorneys involved were slated to receive a total of $78 million – although there was no breakdown as to which firms were receiving what payouts.

Either way, the thrust of the hit against Rankin is that the “former” Democratic senator supported Hearn’s wife – liberal S.C. supreme court justice Kaye Hearn – in her successful bid for a seat on the high court in 2009. And that he played an integral role in almost every facet of the boondoggle her branch of government has been called upon to adjudicate.

Both of those statements are unequivocally true …

Specifically, Rankin was a lead sponsor of the now-infamous, constitutionally dubious “Base Load Review Act” – which put Palmetto State ratepayers on the hook for billions of dollars in construction costs related to the failed NukeGate project.  That project was supposed to put a pair of next generation nuclear reactors in Jenkinsville, S.C. in 2016 and 2017.

The money was spent, but the reactors were never finished.

In addition to socializing the investment risk for this failed project, Rankin is a member of the state’s Public Utility Review Commission (PURC) – which was supposed to protect consumers by overseeing the political appointees chosen to regulate the energy industry and specifically the V.C. Summer project.

A job at which it failed spectacularly …

When NukeGate imploded in July 2017, though – costing ratepayers and taxpayers an estimated $10 billion – Rankin somehow wound up on the panel “investigating” the disaster.

We slammed his appointment at the time, noting “the goal of this legislative charade isn’t to find the truth, it’s to continue covering it up.”

Rankin’s response to the latest round of criticism? Not surprisingly, he was displeased to learn his constituents are receiving multiple reminders of his bad behavior less than four weeks before they vote on giving him an eighth four-year term representing S.C. Senate District 33 (.pdf).

“It is campaign season and the negative, false attacks are flying on robocalls, mail, and fake news sites that are paid for by my political opponents,” Rankin wrote on his Facebook page.

“Negative, false, fake …” but not a single direct, substantive rebuttal from Rankin.

Why not? Because when it comes to the allegations linking him to NukeGate and Santee Cooper, Rankin is guilty as sin.

In an additional deflection, Rankin (above) added that one of the mailings targeting him was (gasp) sent from a mail house in Alabama.

“I print and send my mail from local businesses,” he said.

As if that in any way, shape or form excuses his decades of anti-competitive votes, appointments and other official actions (including his NukeGate treachery) that have materially eroded competitiveness for tens of thousands of Palmetto State businesses.

Our view on Rankin?

Rankin’s NukeGate conduct might have been forgivable had he learned his lesson in the aftermath of the reactors’ abandonment. Unfortunately, he didn’t. As recently as last month, in fact, he was still doing the bidding of Santee Cooper – a rogue agency which continues to thumb its nose at Palmetto State lawmakers, ratepayers, citizens and taxpayers even as the boondoggle has plunged it into debt.

And if Rankin gets another term in office, expect him to continue serving those interests (and himself). Not his constituents. And certainly not the people of South Carolina.