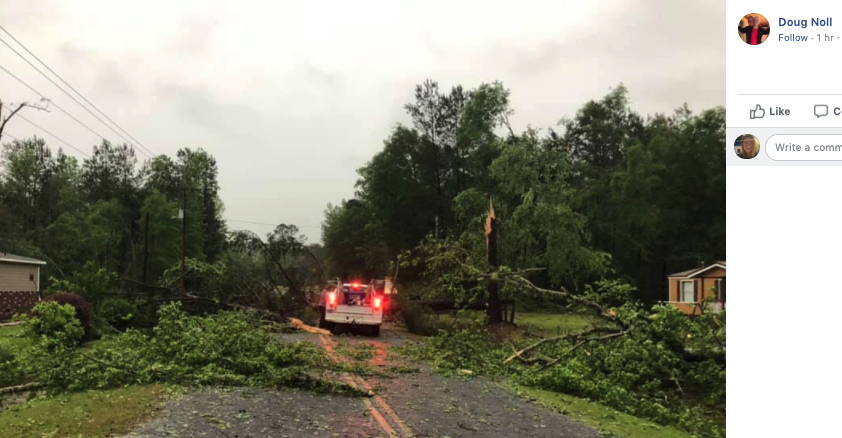 At least nine people in South Carolina are dead after a powerful storm system with several tornadoes ripped through the region Monday morning, according to the South Carolina Emergency Management Division.

The Hampton County Guardian is reporting that five people have died after likely tornadoes tore through the area Monday morning.

“Emergency crews still can’t get to many people,” editor Michael Dewitt of the Guardian said on Facebook Monday morning.

“Responders are trying to get out to help but the roads are full of trees and power lines,” Hampton County Emergency Management officials said on Facebook around 7 a.m. Monday.

Hampton County Sheriff T.C. Smalls reported power lines and trees down on roads across the county.

“We have citizens throughout the county who have experienced devastating damages from the storms earlier,” Smalls said on Facebook. “Please stay off of the roads if possible.

Of those dead in Hampton County, at least three were in Nixville — a small town that was hit hard by a possible tornado, the National Weather Service reported.

“Tornados have been confirmed in Aiken, Greenville, and Oconee counties, but additional tornados will likely be confirmed as damage assessments continue,” SCEMD said in a legislative update Monday Morning.

Emily Wakeman of WIS 10 reports that two people died and two were injured in the storms in Orangeburg County South Carolina, South Carolina.

In the upstate, one person in Oconee County was killed in the storm and several others injured, WSPA reported.

Fox Carolina reported that a contractor died after a tornado hit the BorgWarner facility in Seneca, South Carolina early Monday.

At least 20 people were killed in storms across the south overnight, according to the Associated Press.