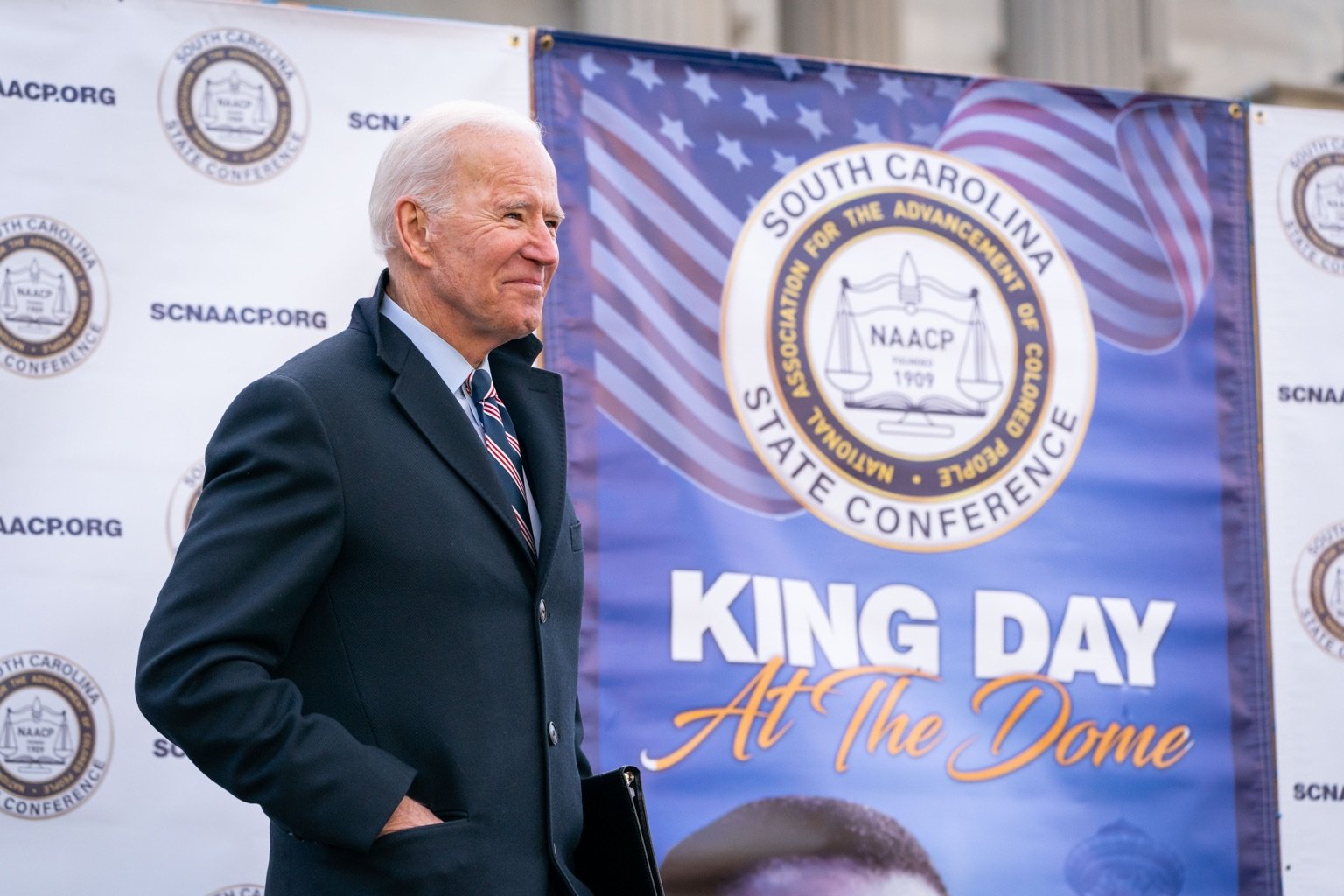 The best quote from the recently concluded 2020 Democratic presidential primary in early-voting South Carolina came from (surprise) state senator Dick Harpootlian – who predicted that former vice president Joe Biden would “kick ass” in the Palmetto State “because this is a normal place” and “he’s a normal guy.”

Harpootlian proceeded to opine that voters in Iowa were inbreds and voters in New Hampshire were stir-crazy from being snowed in all of the time … leading them to make poor presidential selections.

These gems – scored by New York Mag reporter Olivia Nuzzi – seemed to have been validated by Biden’s blowout win over socialist U.S. senator Bernie Sanders and the rest of the Democratic field in the “First in the South” primary on Saturday.

So … was Harpootlian right?

This enduring belief that Biden is somehow “normal” – or “moderate” or “electable” – may have been true of him decades ago, but not today. The ongoing contortions Biden is undertaking as part of his shameless effort to appeal to an increasingly left-leaning Democratic establishment have rendered the 77-year-old politician ideologically disfigured – a shadow of his former “normal” or “moderate” self.

Even worse, these contortions are taking place as the former Democratic frontrunner is demonstrating … how to put this politely … diminished mental fitness. In fact, one of his most radical environmental policies appears to have been the result of stream of consciousness rambling.

In an editorial board meeting with The New York Times in late January, Biden articulated his intention not only to rejoin the Paris climate accord – which U.S. president Donald Trump abandoned in 2017 – but to impose harsh new sanctions on nations which fail to live up to its draconian terms.

“You keep your agreement on the climate accord, which you signed up to,” he said. “If you don’t, you will pay a price for it. You will not be able to sell product here. And (we will) organize the world to make sure that no, they couldn’t sell product anywhere. To make sure that they in fact have a requirement to stick to what they committed to.”

Pressed as to whether such a standard should apply to Canada, which exports fossil fuel to America, Biden concurred.

“That’s what we should be doing to everybody in the world,” he told the Times.

Wait … including the United States?

“We can’t do a damn thing if we don’t meet our responsibility,” Biden said.

The implications of such a radical new policy are profound.

“Were Biden to faithfully follow his commitment to the Paris goals and plan as outlined to the Times, he would push for not only a rapid, managed decline of the fossil fuel industry but the creation of a binding international trade regime with the power to materially discipline any nation – including the U.S. – failing to scale back emissions and carbon-intensive exports,” noted Kate Aronoff for The New Republic.

Aranoff described Biden as “having stumbled into supporting one of the most radical climate proposals of the primary,” endorsing a program that would “place a major damper on U.S. fossil fuel production.”

This “stumble” would mark a reversal of the policies of former U.S. president Barack Obama, who to his credit allowed an unexpected boom in domestic fossil fuel production to take hold – and who has, in fact, taken credit for making the United States an energy exporter.

Biden only appears to be “moderate” on health care issues because Sanders is proposing a far more radical “Medicare for All” plan that would cost, by the candidate’s own reckoning, an astounding $30-40 trillion over its first ten years of implementation.

“While he’s presenting it as a rebuke of the more liberal candidates, in fact it represents a significant move to the left,” noted opinion writer Paul Waldman of The Washington Post.

On taxes, Biden’s own campaign estimates its tax hike plan would drain $3.2 trillion out of the American economy over the coming decade. Writing for USA Today, conservative columnist Andrew Wilford observed that Biden “is well to the left of Obama on tax policy, and the presence of even further-left candidates in the primary does not change that fact.”

“Many Democrats see Joe Biden as a voice of ideological restraint in a party rapidly moving to the left,” Roarty noted. “But the 2020 Democratic frontrunner’s emerging policy agenda is anything but moderate – at least compared to the party’s last presidential nominee.”

“On nearly every major issue, Biden has either exponentially increased the scope of what Clinton proposed or advocated for new ideas that most Democrats would have up until recently considered fringe,” he continued.

Roarty also pointed out how Biden is doing his best not to draw attention to just how radical he has become.

“Biden’s message to voters doesn’t always emphasize his agenda … choosing instead to promote his strength as a candidate against Trump or highlighting his close relationship with Obama,” he reported.

Nowhere is the evolution of Biden into a fringe liberal more evident than in his views on guns, though.

On February 25, 2020 – just four days before his decisive Palmetto State win – Biden posted a message to gun manufacturers, telling them “if I’m elected, I’m coming for you.”

This threat is consistent with his stated opposition to “magazines that can hold multiple bullets in them” – a policy position which, according to Shawn Fleetwood of The Federalist, “would outlaw the vast majority of firearms in America, virtually throwing the Second Amendment under the bus and taking away the constitutional rights of millions of law-abiding Americans.”

Again, Biden used to be what we would classify today as “moderate.” But not anymore. He has morphed into a radical, even if his campaign messaging keeps perpetuating the perception that he is a centrist Democrat running in field of radical socialists.

And so the myth that Biden is moderate and, by extension, “electable,” persists.

As a result, supporters of Biden continue to argue that he is far better positioned to defeat Trump in 2020 than any of the other would-be Democratic nominees – especially Sanders. Trump supporters seem to accept this premise, too, as evidenced by their failed attempts to organize GOP voters against Biden in South Carolina.

We disagree with this conventional wisdom …

In addition to adopting far left policy positions that will be easily exploitable by Trump in November (and extremely difficult for Biden to walk back), we maintain the former vice president is the least well-equipped (mentally and physically) of all the Democratic candidates when it comes to the daunting task of going head-to-head against the incumbent on the campaign trail and (gasp) in presidential debates.

Remember how Trump outworked Clinton during the final days of the 2016 campaign in critical Rust Belt swing states? Does anyone really think Biden will fare better?

Finally, we believe Biden’s ultimate weakness against Trump remains his proximity to the “Ukrainian meddling” scandal that led to the latter’s December 2019 impeachment. As we we have frequently pointed out, Democrats’ decision to engage Trump on the one issue where their own party’s potential 2020 standard-bearer was similarly (and far more seriously) implicated defies comprehension.

Unless, of course, the whole thing was an attempt to take Biden down along with Trump … which would explain why the far left wing of the party (which is loyal to Sanders) was pushing impeachment so aggressively.

Either way, Biden’s brazenly corrupt, self-serving and acknowledged meddling in Ukraine offers Trump a rare opportunity to not only deflect a potentially harmful blow – but to land one against his rival. And it further weakens the myth of Biden’s “electability.”

Bottom line? As the Democratic primary lurches toward a potential brokered convention – the result of a looming three-way battle between Biden, socialist Sanders and liberal billionaire Michael Bloomberg – we suspect the mainstream media will do its level best to tout the former vice president’s “moderate” views.

Biden is no moderate – not on abortion, guns, health care, taxes, government spending, the environment – anything.

Again, walking a nine hundred paces to the left when your opponents are walking a thousand does not make you a moderate. It makes you exactly what Biden has lamentably become: Ever-so-slightly-less-fringe than the fringe candidates he is campaigning against.