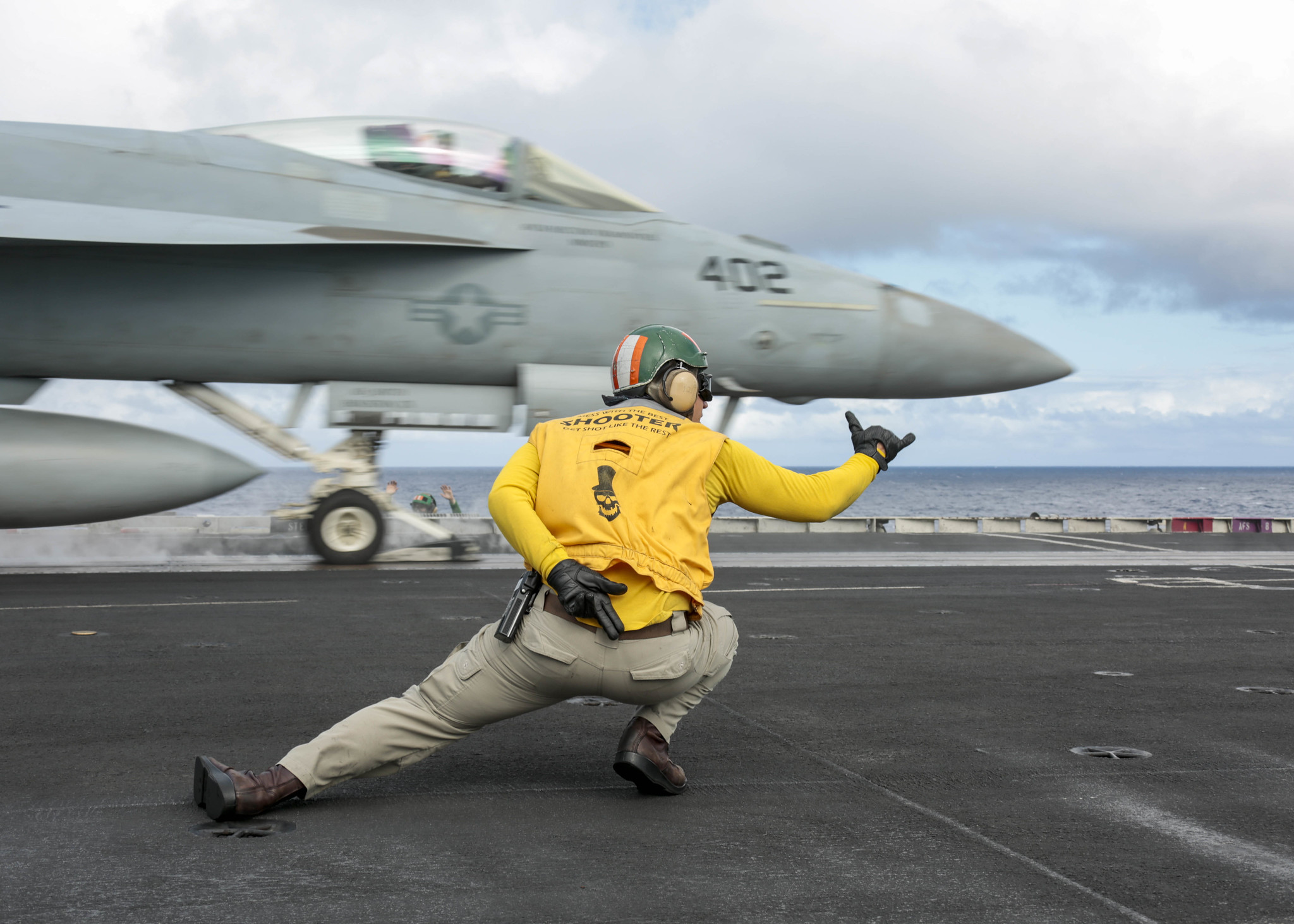 by REBECCA THEODORE || The United States has hurled its first airstrikes in nearly a decade against Iran-backed militia forces in Iraq and Syria.  Cloaked under the umbrella of a ‘maximum pressure’ campaign, whereby draconian U.S economic sanctions compel Iran to more worthwhile enterprises at the table of negotiations, it now seems evident that this ‘political betrothal’ is now steering the U.S. into a new proxy war in the Middle East.

Although the U.S remains equivocal about whether the ultimate goal of its ‘maximum pressure’ campaign is to force a regime change in Iran, a modification in Iran’s behavior, or even to claim influence for Iraq as an objective, Iran’s responses are causes for concern.

Even though Secretary of State Mike Pompeo asserts that the U.S. withdrawal from the 2015 nuclear deal will “force Iran to make a choice: either fight to keep its economy off of life support at home, or keep squandering precious wealth on fights abroad,” it is clear that U.S military strikes on Iran to cease their attacks the on U.S and coalition forces and respect Iraq’s sovereignty amounts to an escalation of tensions in the  Middle East.

Undoubtedly, the Trump administration’s “maximum pressure” campaign on Iran is picking up pace.  From its description of the Revolutionary Guards as a terror organization to canceling waivers from U.S. sanctions that allowed some countries to buy Iranian crude oil, and Iran’s response in targeting military attacks against U.S. forces, and American allies in the Middle East;  the ‘maximum pressure’ campaign is gearing up to its full potential.

According to Pentagon sources, Iranian proxy forces have carried out eleven attacks over the last two months on bases and facilities housing American contractors and service members. Iran has long supported Kata’ib Hezbollah by providing weapons and other lethal aid, thus setting the stage for military conflict in the Middle East.

In turn, provocations on oil tankers in the Gulf, the downing of a U.S drone, an attack on Saudi Arabian oil facilities, and rocket attacks on U.S service members stationed at Iraqi military bases further compels U.S  strike actions against Iranian-backed militia and challenges the U.S. to take to even more measures on the ‘maximum pressure’ campaign.

Whereas the deployment of a U.S. infantry battalion to the Middle East by Defense Secretary Mark Esper is a great response to Iranian aggression and could include an end to U.S. military partnership with Iraq in fighting the Islamic State extremist group, it must be seen that the aims of the maximum pressure campaign is again of great relevance. It is here that a violation of Iraqi sovereignty by U.S forces becomes an underplay.  True to a point, Iraq is caught between its allies in Tehran and Washington and risks becoming an arena for a confrontation between the U.S. and Iran.  Yet, on the other hand, if the United States seeks to reduce conflict with Shiite militias in Iraq, Iranian aggression must be curbed in order to strengthen Washington’s hand in its maximum pressure campaign.

Notwithstanding the fact that Iraq’s consensus prime minister Abdul Mahdi has condemned the U.S. attack, calling it a “dangerous violation of the rules of engagement that govern the work of US-led coalition forces in Iraq, by taking unilateral military action without the approval of Iraqi authorities” those same authorities remain unable to prevent Iranian aggression on Iraqi soil.  Hence, Iran should not be given free rein to use its regional proxies, including Iraqi Shia groups, to target U.S. interests and those of its allies from within.

Given all of these circumstances, Iraq is now the new turf for settling regional and international scores.  However, the dreaded menace of another Benghazi-type event or even another Iran hostage crisis must be avoided at all costs. And for this, the maximum pressure campaign must again take precedence.

Despite the fact that European officials and the United Nations are now calling for a de-escalation of forces in the Middle East, navigating the difficult path from conflict to peace becomes even more challenging – especially where the actions of the United Nations Security Council are concerned.

Ilan Goldenberg, a former Pentagon and State Department official in the Barack Obama administration, recently asserted that “the maximum pressure campaign is not working because the Trump administration has no idea why it’s applying pressure, or what it wants.”

But the killing of Qassim Soleimani, head of the Islamic Revolutionary Guards Corps (IRGC) Quds Force and architect of Tehran’s proxy conflicts in the Middle East, illustrates that Trump administration’s “maximum pressure’’ campaign is starting to deliver. In all truth, the United States would never have felt obligated to assassinate an Iranian general had it not been for the senseless foreign policy failures of the Obama era.  The U.S has now been pushed to the borders of vengeance against Iran and its proxies, because of an Iranian nuclear deal that has occupied the convoluted irreverent theme of U.S. foreign policy for more than two decades. While Iran’s leaders maintained their country was not building nuclear weapons, its enrichment of uranium and history of deception continues to create deep suspicion, proving the Obama administration did not do enough to foil Iranian efforts to develop nuclear weapons, thus enabling Iran to rebuild its economy and continue funding militants throughout the Middle East.

Also obvious is the fact that it was President Obama who signed and approved the 2015 deal between Iran, America, European powers, Russia, and China, placing tight restrictions on Tehran’s nuclear program in exchange for sanctions relief. Under the terms of the deal, Iran agreed to curb its nuclear program in exchange for the lifting of United Nations-imposed sanctions. The Obama administration’s goal was to diplomatically block Iran’s path to nuclear weapon. Nevertheless, the administration failed because it neglected to cover other facets of Iran’s behavior, including Iran’s support for terrorism and its growing missile program that is now threatening U.S. allies in the Middle East and in Europe.

In this regard, if Iranians are inclined to believe they could weather the tempests of sanctions and sway Mr. Trump to negotiate on their terms, the ‘maximum pressure’ campaign will attest to the continuance of imminent attacks in the Middle East.

Inevitably, Iran must stop its sponsorship of terror and its proliferation activities and return to the negotiating table.

As to whether Iran will submit under economic pressure and amend its foreign policy behavior under the dictates of a ‘maximum pressure’ campaign, or whether Iran will become more emboldened, remains to be seen. Saudi Arabia, Israel, and the United Arab Emirates now view Tehran as an adversary.  Consequently, the maximum pressure campaign gains added strength in its anti-Iran tactics, as U.S. forces continue to conduct precision defensive strikes against Kata’ib Hizbollah (KH) facilities in Iraq and Syria in efforts to damage KH’s ability to conduct future attacks against Combined Joint Task Force – Operation Inherent Resolve (CJTF–OIR)   coalition forces, and on American  troops in Iraq.

As implications of the ‘maximum pressure’ campaign grow more complex and problematic, Iran must be compelled to understand that any new nuclear deal would require them to stop enriching uranium and that they should halt their support for all militant groups in the Middle East. The space of phrases like ‘maximum pressure’ campaign is now a challenging one, as language now dissipates in the face of irrational and unthinkable destruction, yet there can’t be any restless silence in accepting that a new U.S.-Iran proxy war, birthed by a ‘maximum pressure campaign’ is now forthcoming, and likely be engraved on that fatal scroll of human history as one of the most pivotal predicaments of the new decade. In the sacrament of death and annihilation, a new glory may gleam upon tears, but know this: The Joint Comprehensive Plan of Action (JCPOA), commonly called the Iran nuclear deal of 2015, is a catastrophe that will haunt U.S generations for decades to come.

Rebecca Theodore is an international journalist and syndicated op-ed columnist based in New York City.  She writes on the platform of national security, politics and human rights.

South Carolina Governor Shuts Down ‘Non-Essential’ Businesses Due To Coronavirus