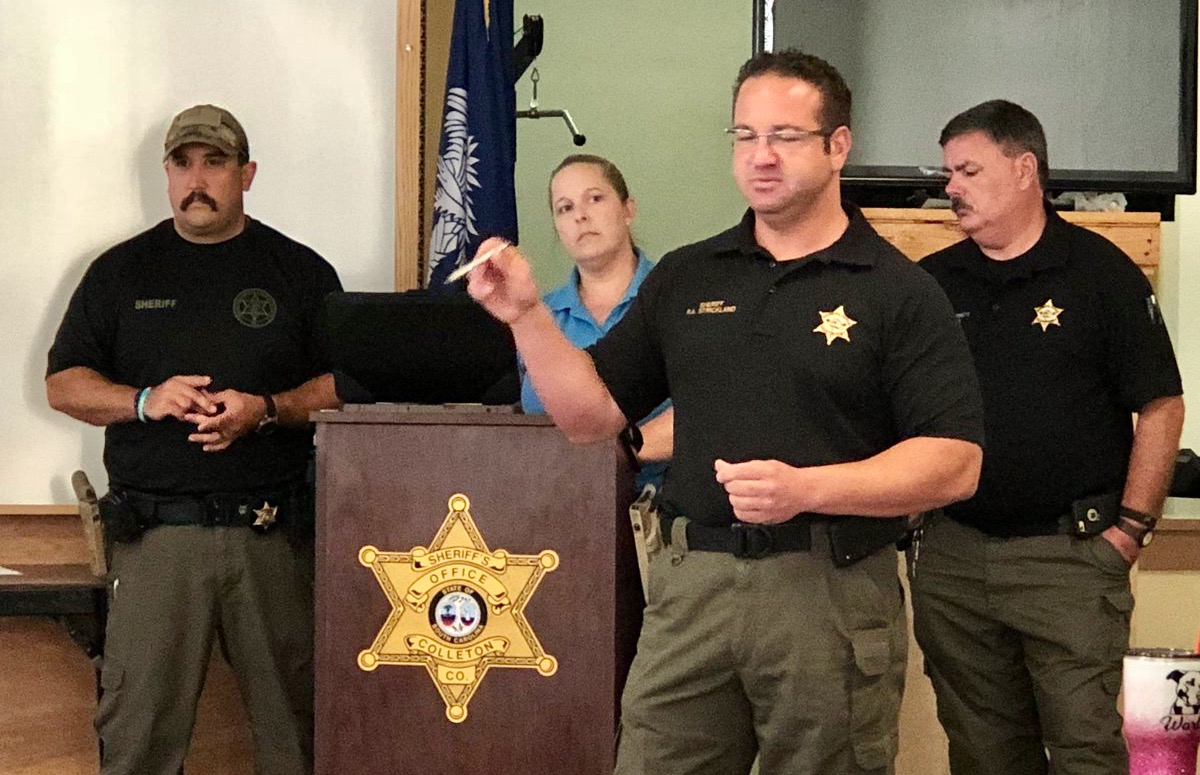 Over the weekend, this news outlet reportedly exclusively on the arrest of scandal-scarred Colleton county, South Carolina sheriff R.A. Strickland by agents of the S.C. State Law Enforcement Division (SLED). Strickland has been charged with second-degree domestic violence in connection with an alleged assault against a yet-to-be-identified female victim.

According to a probable cause affidavit accompanying a warrant for his arrest, Strickland assaulted his victim by “punching her in the face, with a closed fist, more than once, which caused moderate bodily injury.”

The victim also “sustained a defensive injury to her arm in an attempt to protect her face,” according to the affidavit (.pdf).

Strickland is also accused of preventing the woman from calling for help by taking her cell phones away from her.

This news outlet has been furnished with the name of the alleged victim in this case, however we are declining to publish it at this time. We can confirm, however, that the woman is known to sources in Colleton county as a local government official – one who has reportedly been involved in a long-term romantic relationship with the sheriff (one of several alleged extramarital dalliances in which he is embroiled, it would appear).

We have also learned that the alleged victim was recently named in connection with an investigation into Strickland’s rumored misuse of taxpayer funds. The status of that investigation remains unclear, although it has been alleged that Strickland – like former Greenville county sheriff Will Lewis – may have used tax dollars to further an extramarital affair.

Lewis was sentenced to a year in prison last month after a jury found him guilty of misconduct in office in connection with his scandal.

As for Strickland, he announced on Monday that he would be taking a leave of absence.

Strickland went on to say that this was “standard policy within our office.”

“This time will allow me to heal, and self-reflect on myself,” Strickland continued. “I will strive to be stronger, and better at serving the citizens of Colleton, and my employees upon returning.”

How was this statement received by his constituents? Not well …

“What bullsh*t,” a Colleton county resident wrote to us in response to Strickland’s statement. “No remorse. No ‘I’m sorry.'”

We agree … also, our guess is that Strickland’s word choice in referencing a “time to heal” for himself will not go over well with advocates for domestic abuse victims.

Strickland, 40, is married with two children.  A Democrat, he was elected sheriff in 2012 and reelected in 2016. According to a fawning feature story published in The (Charleston, S.C.) Post and Courier four years ago – ironically entitled “A Sheriff’s Passion” – Strickland became “enchanted with the idea of being a policeman” when he was ten years old.

“It was a romance,” reporter Andrew Knapp noted at the time, a “love affair.”

As we noted last fall, “apparently other things have caught his eye in the intervening years.”

Strickland has been putting on a clinic of bad decision-making in recent years. In addition to the questionable expenses and allegations of affairs, he has threatened subordinates politically and engaged in petty turf wars with other law enforcement agencies.

Strickland has yet to be formally indicted in the aftermath of his arrest on Saturday, however when that happens he will be automatically suspended from office pending the resolution of the charges filed against him. South Carolina governor Henry McMaster would then be called upon to appoint an acting sheriff to serve until Strickland was either acquitted or removed from office as a result of a guilty plea or conviction.

UPDATE: Strickland has been formally indicted and statutorily suspended …

Will Lewis To Be Released From Prison On Appeal Bond