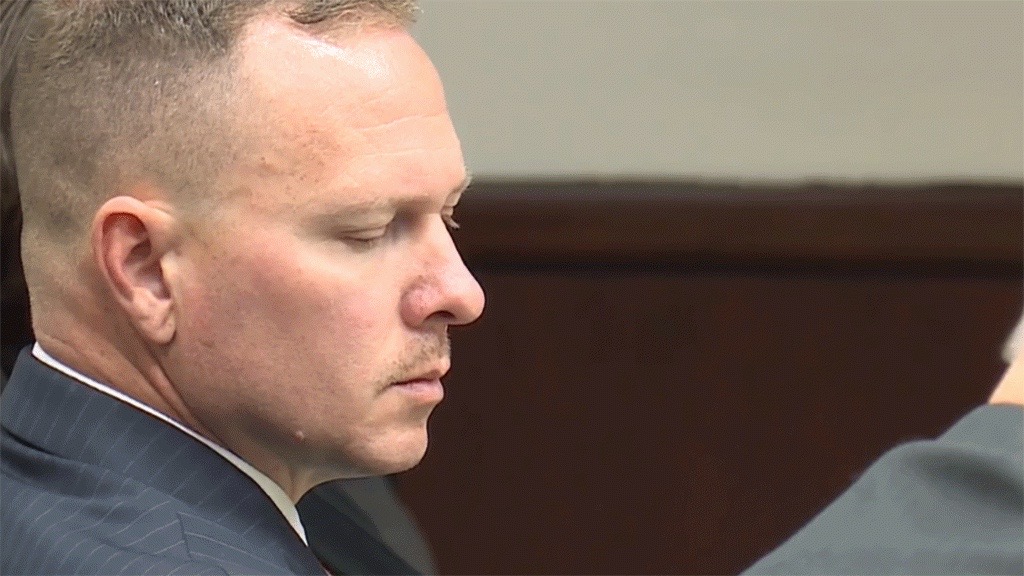 Former Greenville county sheriff Will Lewis fought the law … and the law won. A jury of Lewis’ peers found the 43-year-old law man guilty of misconduct in office late Thursday – triggering his automatic removal from office. Lewis was found not guilty on a second misconduct charge.

South Carolina governor Henry McMaster issued an order memorializing Lewis’ removal from office, but the statute is clear – the moment the verdict was announced shortly after 10:30 p.m. EDT on Thursday at the Greenville county court house, Lewis was no longer sheriff.

That means a special election must be held to fill this office – which Lewis won in 2016, assumed in January of 2017 and from which he was suspended last April following the first round of criminal indictments related to the Savannah Nabors scandal, which broke exclusively on our news outlet.

Stay tuned for dates on that contest …

Judge G. Thomas Cooper Jr. – who presided over the trial – is set to sentence Lewis on Friday. In a breach of protocol, Cooper did not remand Lewis to police custody prior to his sentencing hearing but instead allowed him to return home with his wife over the objections of S.C. sixteenth circuit solicitor Kevin Brackett, who tried Lewis on behalf of the state.

“He shouldn’t be treated differently than anybody else in this situation,” Brackett told Cooper.

He was, though … repeatedly.

For example, Lewis’ wife – Amy Lewis – was allowed to sit next to her husband at the defense table throughout the weeklong trial. The two were openly affectionate, holding hands in front of jurors and patting or rubbing one another on the head and shoulders – until Brackett objected to the display as prejudicial, that is.

Cooper ruled that Amy Lewis was allowed to sit at the table, but told her to keep her hands to herself. She routinely failed to comply with his instructions, however.

Cooper also allowed Lewis to leave the courtroom with his wife following the verdict, although he issued a stern warning to the former sheriff.

“If you’re not in court tomorrow, all hell will reign down on you,” Cooper said.

Brackett’s performance prosecuting the case was universally praised – particularly given the graphic and sensitive nature of the allegations leveled against Lewis by Nabors, a 25-year-old sheriff’s assistant who claimed the disgraced law man drugged and raped her on a business trip to Charlotte, North Carolina in March of 2017.

Nabors originally made the rape allegation in a since-deleted blog post that launched this scandal back in August of 2017.

Nabors (above) expanded on these allegations in a bombshell civil lawsuit filed against Lewis in October of 2017.  In that lawsuit, she graphically detailed the rape allegation – claiming she was drifting in and out of consciousness in a Charlotte hotel room as Lewis had sex with her.

While Brackett made the rape allegations a centerpiece of the trial – over the objection of Lewis’ attorney, Rauch Wise – he made it clear to jurors that he was not charging Lewis with rape.

“I did not indict Will Lewis for sexual assault,” Brackett said during his closing argument. “Mr. Lewis is seated over here at this table … because Mr. Lewis is a corrupt, self-serving, selfish, manipulative man.”

Specifically, Brackett was able to convince jurors that Lewis’ attempts to further a sexual relationship with Nabors involved the misappropriation of tax dollars – making him a “dirty cop” and a “disgrace to the badge.”

Brackett also revealed that Lewis attempted to replace Nabors at the sheriff’s office with Tennessee beauty queen Sydney Salati. Lewis denied knowing Salati until Brackett and his team produced evidence of their interactions. A rebuttal witness also testified that Lewis called him to inquire as to her availability, indicating he wanted to hire her as his assistant and pay her $80,000 annually.

“We met at the SC sheriff(s) association meeting,” Salati (above) said in a statement provided to Fox Carolina. “After meeting, he brought up me working for him as a personal assistant. He asked me to drive to Greenville to discuss further. Something felt off in our conversations following. I decided it was best for me not to pursue.”

A wise move, in our estimation …

This news outlet was the first in the state to call for Lewis’ resignation back in October of 2017 after recordings released in connection with Nabors’ civil suit indicated his attempts to further an extramarital affair with her on the taxpayer dime.

One such recording captured Lewis plotting a romantic getaway for the two of them (using taxpayer funds) to a law enforcement conference in Reno, Nevada.  In another recording, Lewis is heard attempting to coax Nabors into traveling with him to the Reno event.

“I don’t see how that’s gonna work,” Nabors demurred.  “That’s too risky if somebody were to find out.”

Throughout the trial, Lewis’ attorney sought to portray his client’s behavior as evidence of a moral failing – not criminal misconduct in office.

“You can’t do that,” he told jurors. “You can’t use public money to try to have sex with an employee. Everybody seems to understand it, except Will Lewis.”

Stay tuned … in addition to awaiting Lewis’ sentencing, Upstate residents are also assessing their choices for the upcoming special election to replace him, not to mention eying the fallout from what appears to have been an elaborate, well-financed effort to convince Lewis to step down prior to his indictment.

UPDATE: Lewis gets a year behind bars …