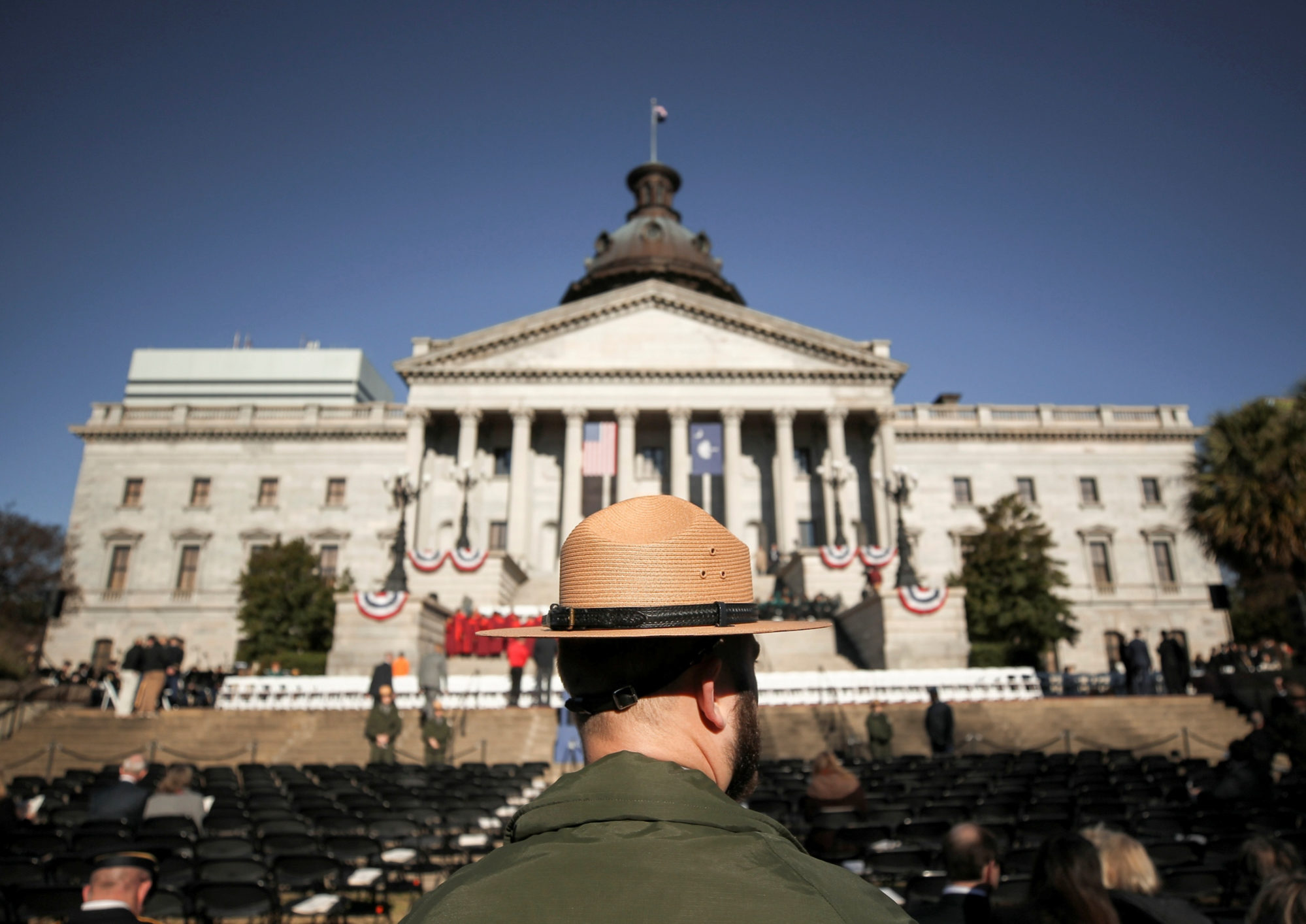 Throw a rock in the air, you’ll hit someone guilty … this was U2 lead singer Bono’s assessment of things in the song “Dirty Day” (off of the 1993 Zooropa album). And as we have noted on several occasions in the past, it is apropos for the state of South Carolina – a banana republic of governmental theft, corruption and malfeasance literally teeming with public “servants” who perpetually profit themselves and their intimates/ associates from the public trough (while routinely avoiding any accountability for their thievery).

Prosperity and justice in the Palmetto State are utterly dependent upon who you know … and the connected clique that governs the South Carolina plantation (and its many local and regional bureaucratic fiefdoms) is determined to make sure that never changes.

Sure, the party labels of those doing the governing may switch – and the racial composition of the ruling elite may vary from jurisdiction to jurisdiction – but the fleecing, favoritism and abuse of power continue unmolested.

If anything, things are getting worse …

There are any number of reasons why those wielding power in the South Carolina have been so successful in maintaining the state’s status quo … but most of it boils down to the fact they make the rules as they go along and invariably get off scot free whenever they are caught breaking those rules.

But in this piece, we focus on another problem … a lack of resources and coordination among those entities responsible for identifying, investigating and prosecuting public corruption in South Carolina.

Well, that and the fact that far too often … many of the entities entrusted with upholding the law are actually in on the corruption (particularly at the local level).

But back to the core issue: Law enforcement and justice as core functions of government.

This news outlet has repeatedly argued that the preservation of life, liberty and property is at the heart of government’s obligation to its citizenry. Accordingly, we rebuke “leaders” who shortchange this core function while blowing billions of dollars on things that government has no business subsidizing.

Such lack of prioritizations befuddles us … but it also holds South Carolina back from reaching its full potential.

This coming year, lawmakers in the S.C. General Assembly will have a massive windfall of new money to appropriate on top of a decade’s worth of billion-dollar-a-year spending increases. This news outlet has advocated that the lion’s share of this new money – at least $2 billion but possibly as much as $3 billion – must be returned to taxpayers in the form of broad-based individual income tax relief (which directly benefits small businesses and middle class consumers, thus stimulating its consumer economy).

If South Carolina hopes to avoid losing additional ground to its neighboring states, then it must invest the vast majority of this windfall into its economy as opposed to pouring more cash into demonstrably failed bureaucracies and crony capitalist schemes that have proven ineffective.

After all, we know those approaches do not work …

Every bit as important as investing in public prosperity, though, is the notion of investing in the public trust … which has been badly eroded in the Palmetto State by decades of generational graft and cover-up. If the people of South Carolina are ever to regain faith in their governmental institutions, then these institutions must be subjected to a new era of disclosure, oversight, investigation and prosecution in the event they break the law.

The days of “leaders” helping themselves to the spoils of office must come to an end.

As we have noted in the past, that process must begin with a radical new conception of income disclosure – one encompassing literally every penny of an officeholder’s earnings. Oh, and this information must be publicly available in real time via a searchable, online database – not unlike campaign finance donations or the online checkbook for government expenditures we keep pushing.

Is that invasive? Yes. But if you don’t like it, you don’t have to go into public “service.”

Such disclosure is absolutely necessary because trusting lawmakers to self-report has been about as effective as trusting them to self-police when they get caught with their hands in various cookie jars.

Second, we believe there must be draconian new regulations governing the sort of employment/ contracts into which government officials (and their relatives) are allowed to enter. Elected office can no longer be a ticket to fattening one’s own bank account and the accounts of family members and business associates. In fact, a few years back we proposed the establishment of an elevated salary for state lawmakers – but recommended accompanying it with a total ban on supplemental income.

“Lawmakers wouldn’t see a dime beyond their inflation-adjusted salaries (and defined benefits available to all other state employees),” we wrote. “No more ‘in-district’ or ‘per diem’ payouts.  Just their salaries and benefits. Period.”

Thirdly, there must be consequences when lawmakers are found to be in violation of these draconian regulations … “meaning jail time for politicians when they break the law.”

Is that harsh? Possibly.

It is necessary? Absolutely.

Sadly, lawmakers have failed to write tougher laws and judges have refused to enforce the weak laws which are already on the books.  Oh, and lawmakers are still refusing to remove themselves as ethics arbiters – just as they have retained the ongoing tyranny of legislative election of judges (which is arguably the most corrupt process in all of state government).

So there has been no effort whatsoever to restore public faith …

As lawmakers greedily eye the upcoming budget surplus, though, there must be a renewed commitment within the forthcoming spending plan to fighting public corruption. In addition to passing the sort of uncompromising ethics reform outlined above, lawmakers must give the agencies tasked with investigating and prosecuting public corruption the resources they need to meet the growing demand that exists in the state.

We are talking about millions of dollars in overdue funding increases for new investigators at the S.C. State Law Enforcement Division (SLED) as well as new prosecutors in the S.C. attorney general’s office (and new lawyers for the statewide grand jury).

Additional anti-corruption resources should be allocated to the state’s sixteen judicial circuits, money which would be accompanied by mandatory referral procedures preventing conflicts of interest from arising within these circuits.

Coordinating it all? A statewide public integrity unit working in concert with the U.S. attorney’s office for the state of South Carolina – which has been refreshingly active on public corruption cases thanks to the leadership of Sherri Lydon (above).

Also, certain statewide investigatory functions – including the legislative oversight committee, the S.C. Legislative Audit Council (SCLAC) and the state inspector general’s office – should be folded together and placed under this public integrity unit, which we would put under SLED’s roof. While anti-corruption efforts in South Carolina must be dramatically expanded, there is never an excuse for duplicative work.

And finally – as we have argued for years – legislative “ethics” committees must be written out of the law completely. Meaning no more self-serving “justice” doled out by state lawmakers to their colleagues.

State lawmakers have had years to fix gaping holes in ethics law … but they have refused to do so because, once again, they and their family members and business associates profit from the current system. And as noted, there is absolutely zero accountability when glaring violations are uncovered.

Is it any wonder things have gotten so bad? And public faith has deteriorated so dramatically?

It is past time to tighten up ethics law in South Carolina – giving prosecutors the tools they need to combat smash-and-grab thievery while compelling judges to drop the hammer on violators. And in addition to passing uncompromising, unambiguous new anti-corruption legislation, lawmakers must empower investigators and prosecutors with the resources they need to meet the rising challenge of escalating institutional lawlessness within the Palmetto State.

Absent such reform (and a commitment to implementing it), things will continue to get worse for the citizens and taxpayers of this state.