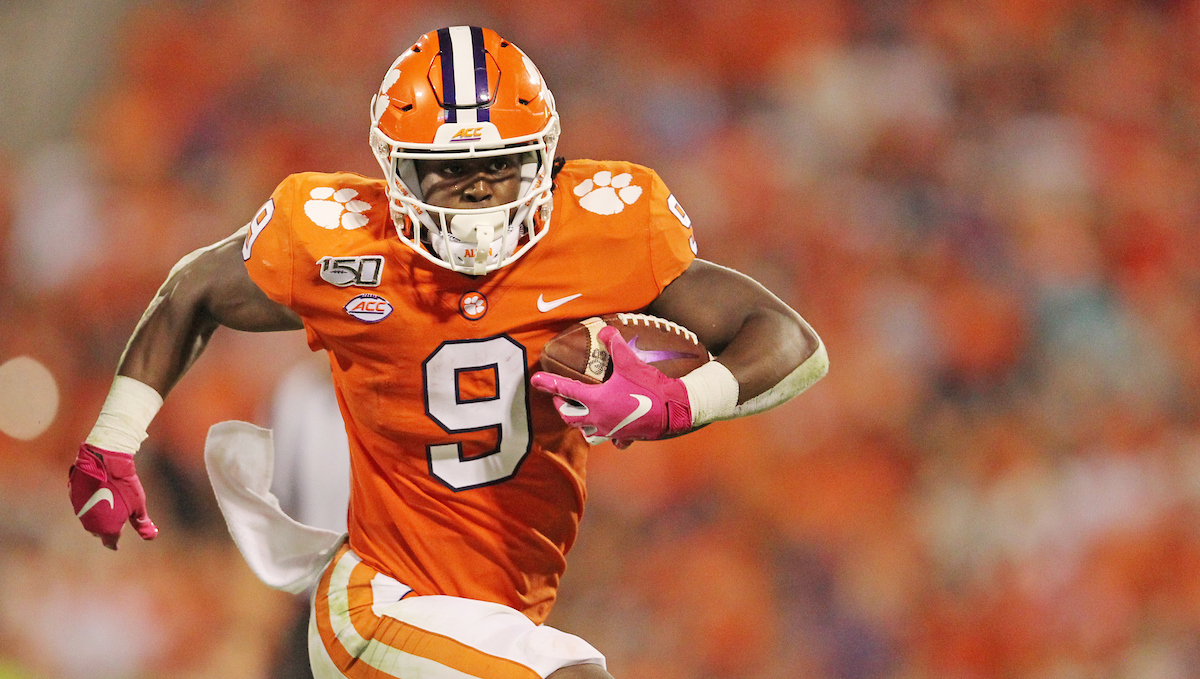 Halfway across the country on Saturday, undefeated and fifth-ranked Oklahoma was upset by unranked Kansas State. The week before, sixth-ranked Wisconsin fell to unranked Illinois. And the week before that, third-ranked Georgia fell to South Carolina.

It can happen to anybody, in other words … it just hasn’t happened to the Clemson Tigers. At least not yet.

The defending national champions shredded a conference opponent for the third week in a row to remain undefeated – extending the longest active winning streak in college football to 23 games and maintaining their positioning for a fifth consecutive appearance in the College Football Playoff (CFP).

The end result? A 59-7 shellacking of the Boston College Eagles, who lost for the ninth straight year to Clemson.

On defense, Clemson contained arguably the best running back in all of college football – limiting junior tailback AJ Dillon to a season-low 76 yards on 19 carries. All told, Boston College was held to a season-low 177 yards and their lowest point production since last year’s loss to the Tigers.

Unheralded stars also got in on the action … on both sides of the ball.

The 6-foot-4, 210-pound native of Greensboro, North Carolina caught three passes for a career-high 119 yards. All three receptions by Overton (above) went for scores – including touchdown strikes of 22 and 63 yards from Lawrence and 34 yards from backup quarterback Chase Brice, who took over midway through the third quarter.

“It’s just a blessing,” Overton said after the game. “I’ve put in a lot of work and kept the faith. It’s great to see it pay off. It’s been a long time coming. I could have transferred and let my team down, but I just kept the faith and pushed through.”

Asked why he stayed at Clemson, Overton cited the culture of the program and his loyalty to his teammates.

“I just knew that there was nowhere else like this,” he said. “I knew that this was the best decision for me and I couldn’t see myself anywhere else. I knew I needed to stay on this path.”

As for those who find themselves in the Tigers’ path, it’s a completely different story …

“They made every play they could possibly make,” an exasperated Boston College head coach Steve Addazio said after the game. “They played like the No. 1 team in the country.”

Addazio also made reference to the Tigers’ trampling of then-No. 1 Alabama in last season’s national championship game, calling Clemson a “monster” and a “buzzsaw.”

“They played like the team that went after Alabama in the national championship,” he said. “That’s what happened out there tonight.”

Still, Clemson is searching for respect …

After losing their No. 1 ranking to Alabama following a near-loss against unranked North Carolina last month, Clemson has been leapfrogged in the polls by LSU and (most recently) Ohio State.

And despite the emphatic beatdown the Tigers (8-0, 6-0 ACC) put on the Eagles (4-4, 2-3 ACC) at Death Valley on Saturday night, LSU and Ohio State notched big conference wins against ranked opponents – including the Tigers’ 23-20 win over ninth-ranked Auburn at the “other” Death Valley.

In other words, don’t expect Clemson to move up in the polls. In fact, head coach Dabo Swinney’s team could find itself pressed by No. 6 Penn State – which also moved to 8-0 on the season following a road win against Michigan State.

Still, Clemson showcased its playoff form against the Eagles – amassing a season-high 674 yards despite pulling Lawrence and Etienne after only two-and-a-half quarters of action. While the gaudy numbers were impressive, Swinney said he was most impressed by the care his team took with the football.

“That’s the first game we’ve had no turnovers since the national championship last year,” he said. “Hopefully, that’s a sign of good things to come.”

He also praised Etienne and Overton for their offensive performances.

“Travis Etienne continues to set the tone for us offensively. I’m really proud of everybody on offense,” Swinney said. “I couldn’t be happier for Diondre Overton. He’s a really good player, and it was awesome to see his hard work pay off tonight. He tied a school record with three receiving touchdowns.”

The Katie Hill Scandal Is Over

Does Clemson Deserve Its Ranking?