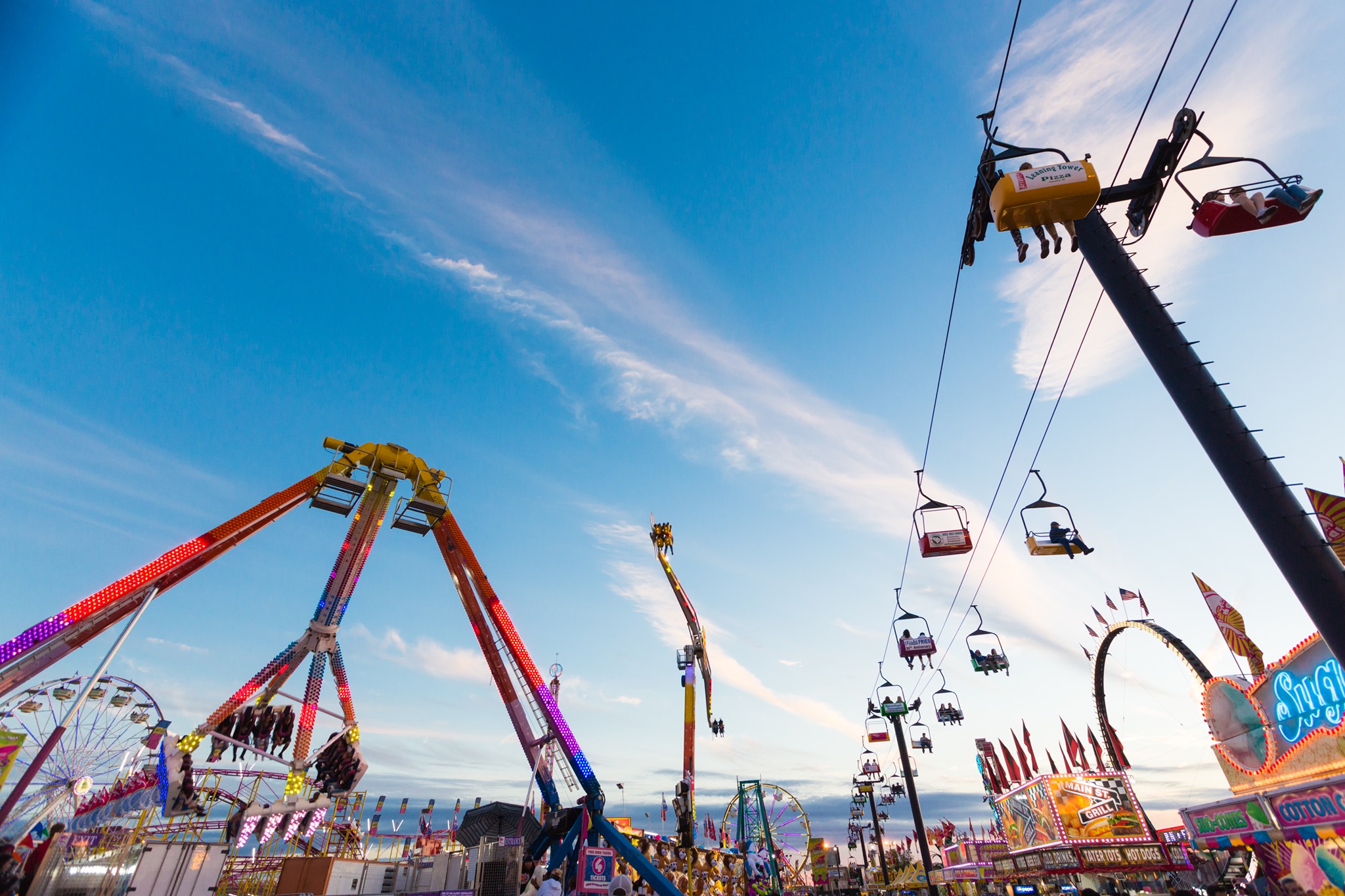 Saturday, October 12, 2019 was a night that my partner and I had been looking forward to for a long time. It was our second time going to the South Carolina State Fair together, and it was something that we hoped would become an annual occurrence. But what was supposed to be the beginning of a Fall tradition turned into something horrifying in a split second.

When we arrived at the fair that night, we were surprised by how immensely crowded it was. Still, we were determined to have a good time. Both of us being in our early thirties, we didn’t have much interest in the nauseating rides. Instead, we just hoped to enjoy the greasy food, the cheesy festival games, and carefree atmosphere.

We slowly made our way through the petting zoo, stopping briefly to touch as many animals as I could. Then we perused the art gallery, talking excitedly to each other about what we wanted to see next. When we exited the art building, the food stalls were calling our name. My partner and I decided we’d stop for a quick snack before trying our hands at winning one of those giant stuffed animals that nobody wants to carry around.

I chose to start the night with some classic French fries. You know, those ones that come in the big cup? It’s like a bucket of artery-clogging heaven. I made small talk with the man in the booth, asking him where I should go to buy game tickets and such, while my partner wandered off in the direction of the utensils. It wasn’t long before he passed the steaming bucket of fries through the window and I stepped aside to put my change back in my purse.

It was about ?9:55 PM? when I first noticed a change in the energy around me. The chirping sounds of happy families started to become more scarce and in its place came voices filled with panic and confusion. I looked up and saw a family begin to run. Parents were snatching their children’s hands and dragging them along, hardly noticing that their little legs couldn’t quite keep up.

My partner was making his way back toward me, and I just remember him saying, “Something is happening.”

In a matter of seconds, I was on the ground. Small bits of gravel dug into my knees but I barely felt it through the rush of adrenaline that was starting to course through me. That’s when the first shots were fired.

I heard three loud pops, each of them less than 100 yards away from where I was kneeling on the ground. My partner grabbed me and pulled me to my feet but before I could stand all the way up, he was telling me to stay low. I couldn’t make sense of what was happening as he ushered us quickly through the crowds of now frantic people. Finally, it started to click in my mind when he said, “Those were gunshots. Stay low.”

Having grown up on a military base and owning a few firearms himself, he knew right away what we were hearing and how we should respond. We scrambled to a brick pillar attached to one of the buildings, trying to stay hidden while we figured out which direction was safest to run.

Another couple joined us, while more and more people ran past frantically screaming “He’s shooting! Run!”

Everyone was heading for the exits. Tables were being knocked over, belongings were being abandoned, innocent bystanders were being shoved to the ground and trampled in their attempts to escape.

My partner told me not to. He was sure someone else or multiple someones had probably already done it, and besides, we needed to focus on getting out of there before we could do anything else. It felt like a lifetime, but it was probably only two or three minutes before the stampede of people was gone. An eerie quiet spread around us, and it seemed that the threat was over. For the moment.

We had to make a run for it. We’d lost our sense of direction in all the chaos, and we just hoped that whichever way we ran, we’d find an exit. Along the way, we stayed as close as we could to the buildings, not wanting the exposure of open spaces. As we finally approached an exit, we saw that people were pushing their way through the gates in an attempt to escape, so we detoured through what appeared to be an employee parking lot. I saw several people crouching behind cars, trucks, and even what I believed to be large air conditioning units in attempt to shield themselves from the horror taking place around them.

Three young men sprinted from behind us, each began to stack pallets in an attempt to scale the fence that surrounded the lot. A toddler was cupping her ears and screaming, terrified of whatever was happening even as her father carried her towards relative safety.

The gate leading out of the fenced-in parking lot took us out onto an unfamiliar street, but at least we were finally out. It was at this point that I realized my knee was not only aching, but it was bleeding from my initial fall.

Police later claimed that nobody called 911 throughout the whole incident, and yet miraculously multiple ambulances and firetrucks whizzed past us trying to locate the source of the panic. We quickly made our way in the opposite direction of where the sirens were headed, wanting to be as far away from all of it as possible. We made it to another parking lot, this one across the street from the fairgrounds. It was a good distance away, but still not far enough.

A young girl with curly brown hair was crouching behind a car in the lot with a phone pressed to her ear. I overheard her say in a shaky voice, “Mom, someone was shooting.”

I realized then that I should probably call my own mother before news of the shooting began to spread. When I pulled out my phone to call her, it was ?10:08 PM? – less than fifteen minutes since I first heard the gunfire. I explained the situation to my mother, and assured her that we were safe and were going to find our car and head home. As I was talking to her, a rush of newly screaming people rushed out of the front gate of the fair.

I told my mom I had to go; I had to run. I cannot say with certainty what brought about that second surge of panic. The fear was real enough to make the ache in my leg disappear from my mind once more as we tried to gather
our bearings and search for our car.

We came across a person lying in a patch of grass. She was surrounded by people, one of whom was telling her “It’s okay, you weren’t shot.”

An ambulance blew past us and we decided it was best not to stay and spectate.

Another woman a little ways away was sitting on the ground, crying hysterically while surrounded by a friend and a few small children. The friend kept assuring her “The Uber is close. He’s almost here.”

When I finally sat down in the passenger’s seat of my car, I let the events of the last twenty minutes wash over me. My partner drove us away from the still-chaotic scene while I assessed the injuries to my leg. Once I was satisfied that no more bits of gravel were embedded in the wound, I wanted to check the news and see if anyone could offer an explanation of the storm that had just exploded in the fair grounds. But there was nothing. The only thing I found was a tweet from the Richland County sheriff’s department saying “BREAKING: There has NOT been a shooting at the State Fair.”

This tweet was sent barely thirty minutes after I heard the first shots. Since then every news article and social media source has been adamant that no shooting occurred. They say that the real tragedy was how badly people overreacted to this minor incident, and how several people were injured during the struggle to escape. As patrons, we are made to believe that we can only blame ourselves for panicking over something that never even
happened.

I understand that it’s an incredible burden for some to admit the circumstances in which transpired. I understand that there is a desperation to want this to have just been an accident or an ‘overreaction’ because if so no one has to feel responsible for potentially putting thousands of lives in danger in a place that’s supposed to be filled with carefree laughter and endless fun.

For all the others who were at the fair that night, it is important that the truth be known. The truth is critical in healing and understanding what we went through. It is critical for every individual effected by Saturday night’s events to know that their truth is valid.

Thank you for sharing your perspective on what transpired at the S.C. State Fair last weekend. The disconnect between what so many witnesses saw (and heard) compared to the official law enforcement narrative of what transpired is unlike anything we have ever covered. Hopefully one day some sense will be made of what happened, but until then thank you for sharing what you witnessed – and encouraging others to do the same.