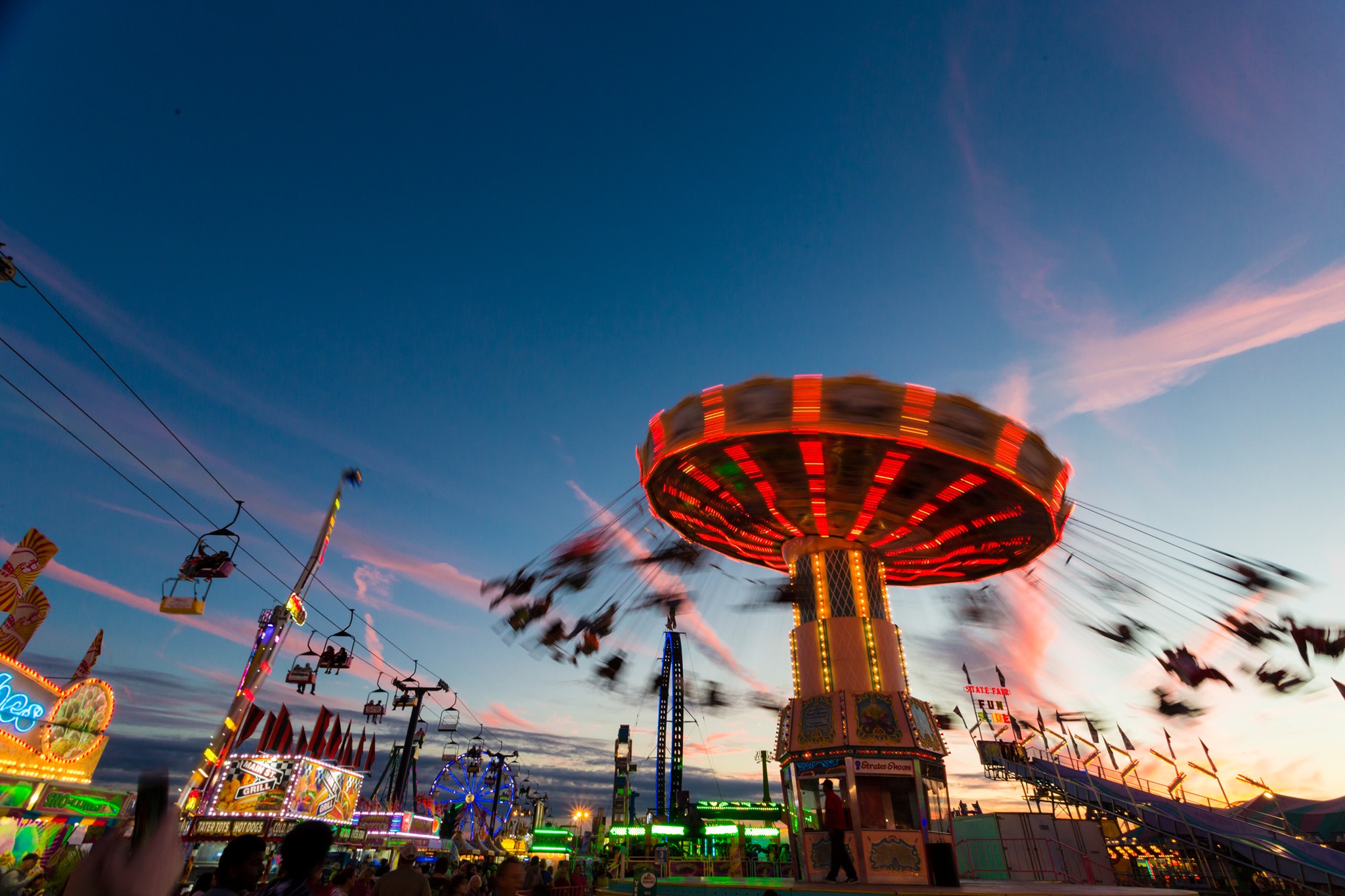 To whomever it may concern,

My name is Riley Davis. I am 18 years old, an enrolled student at Coastal Carolina University, and experienced the chaos at the State Fair on Saturday night. As an aspiring journalist, I wanted to reach out to let you know I appreciate a source taking action to reveal the truth when others refused to do so.

While waiting in line for The Skateboard ride with six friends, I looked behind me to admire how beautiful the lights were at night. This was my first time going to our state fair, and I was trying to take in the scenery of it all. A sense of anxiety came over me when I saw a woman with the look of terror in her eyes hastily pick up her toddler, held him to her chest with her hand cradling his head, start running at full speed. I frantically looked around and saw dozens – then hundreds – of people coming our way, all sprinting as fast as that woman was. A middle-aged man grabbed his wife’s hand, and the surprise of his sudden movements caused her to lose balance.

She stumbled into a fellow patron’s stroller and caused it to fall over, her baby falling onto the ground with said hundreds of innocent fair-goers quickly approaching us all in the process. A teenage boy was carrying a little girl as she screamed: “What was that noise?!”

I heard the same sound she did. As someone who has lived in the Lowcountry for the entirety of their life, I’ve grown accustomed to recognizing the sound of guns. Three shots went off within a matter of seconds, and that’s when I grabbed two of my friend’s hands, screaming for them to come on. No one in our group is over the age of nineteen, nor are we well versed in emergencies. My thoughts were racing since I was trying to find somewhere for all of us to take cover while keeping everyone together during the madness. Several younger women forcefully pushed their way past us, causing our group to split in different directions. I saw families hugging each other as hard as they could while hiding behind any resemblance of structure, that of which mostly being the larger coolers beside vendor stands and the actual stands themselves. With the remaining two friends I had beside me, I ran between the parked semi-trucks to make sure we were out of the line of fire.

After making sure we had no immediate physical injuries, I led those I care about under one of the trucks. We sat between the tires and watched as others did the same as us. One of my friends called a family member after misdialing two times because her hands were shaking so much. I was hugging the other since we were both having panic attacks. After catching our breath, we called the other members of the group to see if they were safe. Two of them were close by, so I crawled out from under our cover to bring them to where we were. The others had found shelter around the fairgrounds, and we made the plan to head to the car when we felt safe enough to leave.

After about five minutes, a fair staff member with a red shirt told us to come out from under the truck. Thinking he would help us, I asked if he knew what was going on and where we could find safety. He very rudely said he didn’t know, didn’t care, and that everyone had to leave the area where the semis were because it was a safety hazard. I couldn’t help but laugh at the irony and insincerity another human being was showing us during a time when we needed guidance. I explained how we thought there was a shooter, how we didn’t feel safe in the open. He retorted by snickering and calling us foolish for thinking a vehicle was going to help us.

A fellow patron, who was not much older than I, spoke before I could and told the staff member that we were doing the right thing. This young man said he was in the army and that he was taught to run to structurally clustered areas during gunfire. The staff member claimed he understood but still said it wasn’t a smart idea, saying: “staying still won’t save you from a bullet.” Raging, the group and I started walking towards the exit.

With the gate nearly in sight, there was another round of pops. They were faint but still caused the remaining fairgoers around us to all run towards the gate at once. Since we still didn’t know where a remaining member was, we decided that two of us should check our cars for her presence while the rest stayed in case she was still on the grounds. Many were able to leave but shortly after, two police officers closed the gate but refused to answer any questions I had. Several staff members were around the T-Mobile advertisement truck, all of which either ignored my pleas for information or shrugged.

A family was to my left, the mom sobbing as her daughter did the same while saying she didn’t want to die. A deputy sheriff walked past mumbling to himself about not knowing why it was decided to keep the activities open so late. I explained our situation and how helpless I felt not knowing anything. I asked what he knew and he said that he was only aware of a teenage male being a victim of a shooting in the parking lot but that a lot was still unknown. He said their main objective was to reunite the children that became separated from their guardians and then escorting the remaining customers out. The gates were finally opened after dozens of panicked people gathered, screaming and demanding to be let out. When the officers felt confident enough to let us do so, we walked back to our cars and saw flashing lights all around us.

Getting out of the parking lot alone took forty-five minutes. During that time, I counted six ambulances with their sirens on that arrived and surrounded the fairgrounds. While waiting to leave, I was checking every local news and social media site I could to see if there was any clarity to be had. Twenty minutes later I was met with a headline that read “Untrue Gunshot Reports at SC State Fair Were Groups Running, Officials Say.”

My first reaction was being disappointed in myself for reacting as severely as I was over a false alarm, but that changed when I saw others saying they heard gunshots the same time I did. I checked Twitter and read a statement from fair officials saying: “young adults running through the grounds in waves … created a disruption and understandably anxiety for our patrons.”

Our ride home was primarily filled with silence as we tried to digest what just happened. I felt a lot of emotions; fear, anxiety, sadness, worry, helplessness, anger, but shock wasn’t one of them. I’ve been forced to grow up in a society where I fear large crowds because of the uncertainty of a weapon in the wrong hands. It took a lot for me to build up the courage to even walk through the gates, which were very poorly guarded. Handicap patrons who were unable to go through the metal detector were allowed to enter without their bags being checked.

During the twenty minutes I was in line, I saw security check inside maybe five bags out of the dozens that they were handed. For such a large event, that is more than unacceptable. To quote Nancy Smith: “The fair is much like a sanctuary. Violence has no place in a sanctuary, and therefore, violence has no place at the SC fair.”

I wholeheartedly appreciate the intention, but not so much the execution. I didn’t feel safe the second my purse wasn’t checked by security, which was part of the reason I didn’t experience the feeling of shock. The amount of desensitization we are forced to have towards shootings is not justifiable and the lack of prevention is inexcusable. With it being the 150th anniversary, I was expecting extra precautions to be put into place, but instead I was left terrified and running for my life. With that said, I’d like to express that it takes an extremely stressful situation for me to react the way I am.

As someone who was chronically ill for the majority of their life, I’ve experienced many anxiety ridden situations. I’ve experienced more fear, uncertainty, and worry than I can put into words. For nearly five years, the only reason I left my house was to go to school for homebound instruction or doctor’s appointments. I became too easily fatigued to do much else and with every step I took, I experienced horrid pain. I’ve had three major corrective surgeries on my left leg that left me unable to partake in ”normal” teenage activities for two years because with my conditions, rehabilitation for everyday function took much longer than usual.

To this day, my quality of life has decreased because of the pain, hence why my group and I tried to make a plan before we went. We had an idea of what we wanted to see and what we wanted to do so we wouldn’t be walking around such a large, crowded place aimlessly. I studied a map of the fairgrounds on the way there so I would have an idea of my bearings. We made sure everyone in the group had at least one other person with them at all times so no one was alone if we split up. I thought I was being overly cautious and I wish SC State Fair officials could say the same.

Regardless of what did happen, there’s no justification for it. No one, regardless of the circumstances, should have to fear for their life and then feel as if it was an overreaction. Visiting the South Carolina State Fair was supposed to be my way of celebrating my newfound health and ability to experience normal activities. Instead, I was left traumatized and in excruciating pain from all the strain on my leg. Those that experienced what I did deserve to be validated instead of dismissed which is the opposite of what has been done so far.

Since there weren’t any casualties, I understand officials trying to downplay the situation. However, the lack of empathy as well as accountability causes an indescribable sense of loss in humanity. I would never wish that experience on anyone and I’m ashamed that the state in which I reside in let this happen. I’m even more ashamed that it’s being perpetuated by consistent misrepresentation. I hope that it doesn’t continue and that we can find a way to truly make the State Fair a sanctuary again.

Thank you so much for submitting this letter. I have heard from dozens of witnesses who insist they heard gunfire at the fair on Saturday evening.

Whatever happened, I appreciate you taking the time to share what you experienced – and your perspectives – with FITSNews’ readers.