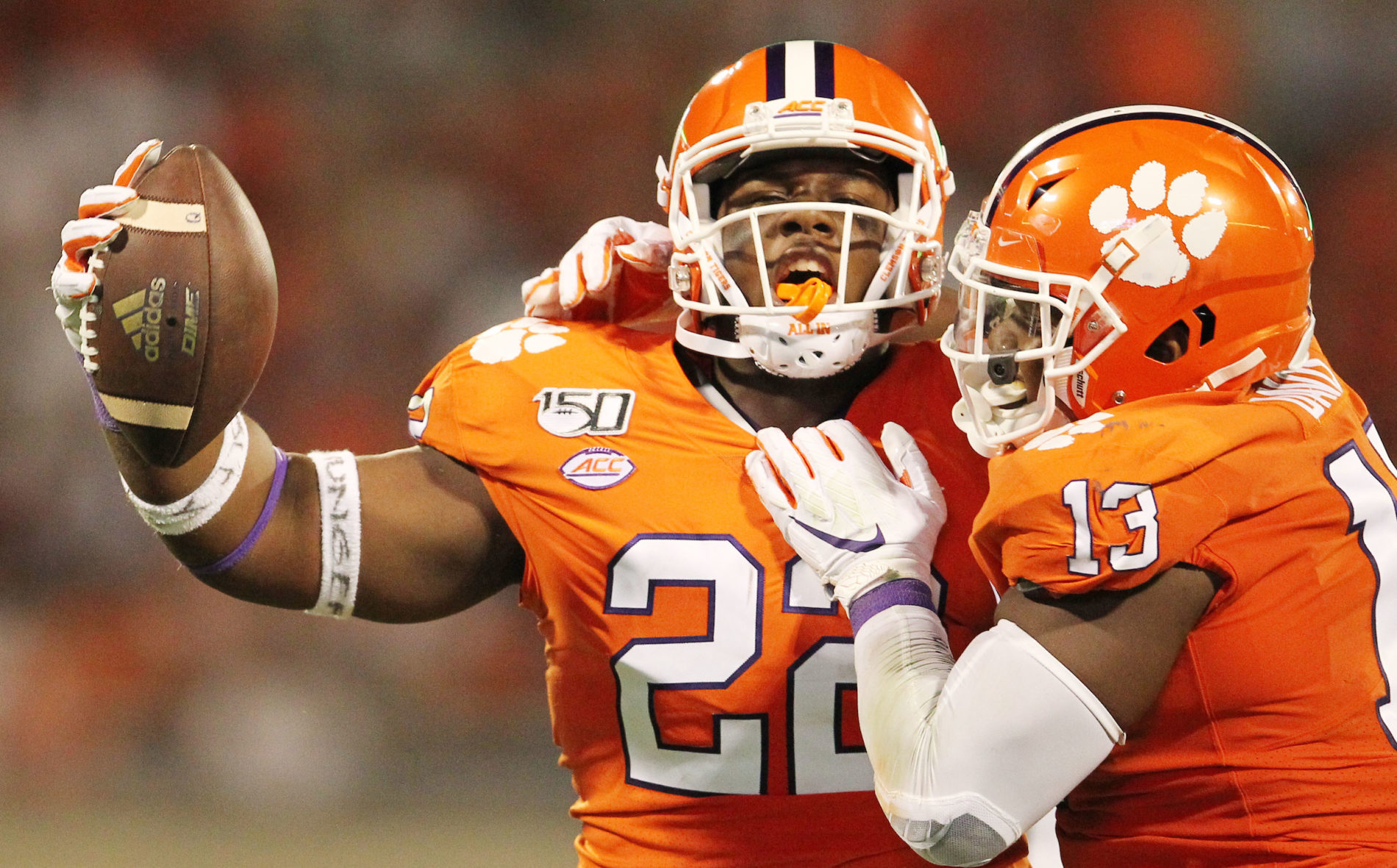 “Heavy is the head that wears the crown,” ESPN analyst Lee Corso said prior to Clemson University’s top-ranked football program kicking off its 2019 season.

This famous misquote – lifted from William Shakespeare’s Henry IV – proved utterly inapplicable to the Tigers, who turned the Ramblin’ Wreck from Georgia Tech into smoldering highway ruins on Thursday night during an emphatic 52-14 victory in front of 79,118 fans at Death Valley (the real one).

The win also played out on the newly launched ACC Network, which is debuting this season as a partnership with ESPN.

Head coach Dabo Swinney’s program – coming off of its second national championship in three years – showed no signs of rust in dismantling the Yellow Jackets, who are at the beginning of a long rebuilding process under first-year head coach Geoff Collins.

Preseason All-American Travis Etienne rushed for a career-high 205 yards on 12 carries – including a 90-yard touchdown jaunt in the first quarter (one of three scores on the evening for the junior tailback from Jennings, Louisiana). Etienne’s 90-yard score tied the mark for the longest touchdown run in school history, and propelled him into the early Heisman Trophy conversation.

The returning ACC player of the year started off cold – getting stopped for negative yardage on his first two carries and fumbling on the Tigers’ third possession.

“Everyone was like ‘you owe me, you owe me,’ so I was just trying to get it back for them,” Etienne said after the game.

He got it back, alright …

Etienne’s big night bailed out a middling performance from Clemson’s top Heisman hopeful, sophomore quarterback Trevor Lawrence. The 6-foot-6, 220-pound Cartersville, Georgia native completed only 13 of 23 passes for 168 yards with one touchdown and two interceptions. Lawrence also ran for 24 yards and one score – a six-yard keeper that gave Clemson an early 7-0 lead over the Yellow Jackets.

Prior to Saturday, Lawrence had never thrown more than one interception in a game. In fact, he threw only four interceptions in 11 starts last year – and had not been picked off since a November 10, 2018 road win over Boston College.

To his credit, Lawrence made a touchdown saving tackle on one of his two interceptions – keeping Georgia Tech from turning the miscue into points.

Lawrence’s best throw of the night was a beautiful deep ball to junior wide receiver Tee Higgins, who hauled in the pass and then cut to the inside to evade Tech defensive back Zamari Walton as he angled his way into the end zone.

That touchdown put Clemson up 28-0. Higgins led all Tiger receivers with 98 yards on four receptions.

With the offense pounding away at Tech on the ground, Clemson defensive coordinator Brent Venables’ unit showed it could once again rebound after losing multiple stars to the National Football League (NFL).

Venables was missing NFL first round picks Clelin Ferrell, Christian Wilkins and Dexter Lawrence on the defensive line (and fourth-round pick Austin Bryant), but the Tigers still managed to hold Tech to under 300 total yards while forcing four turnovers.

Clemson’s defense also made several pivotal red zone stops after turnovers – preventing Tech from capitalizing on Tiger mistakes that could have made the game interesting.

“Isaiah Simmons set the tone early with a great tackle for loss,” Swinney said after the game. “He has so much length. He’s hard to get away from. He’s physical and he made some wild plays out there.”

A total of ninety players took the field for Swinney during the blowout win – which allowed starters on both sides of the ball to conserve their energy for the long season ahead.

Clemson (1-0, 1-0 ACC) won for the sixteenth time in a row, the longest active streak in college football. The Tigers will look to keep things rolling on September 9 when they welcome No. 12 Texas A&M to Tigertown.

Kickoff next Saturday is set for 3:30 p.m. EDT with ABC providing national television coverage of the game.