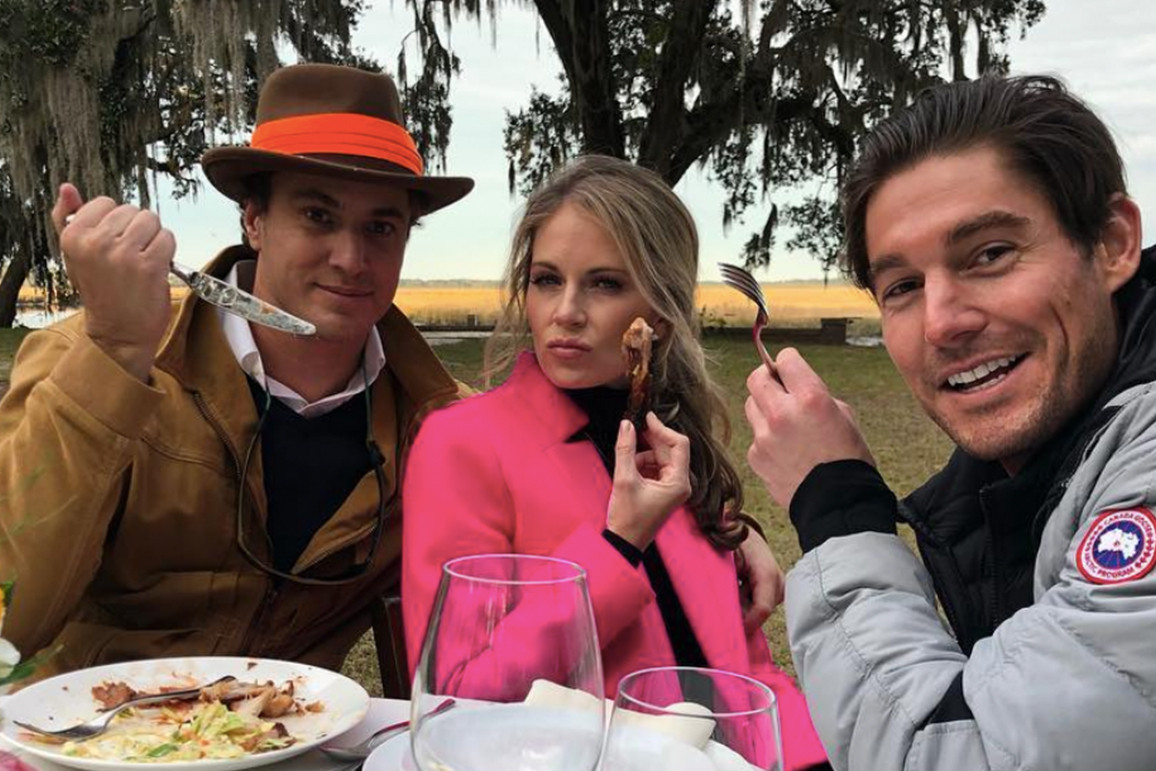 by AMY FEINSTEIN || I might be dating myself, but once upon a time, there would be episodes of your favorite shows which were deemed “very special episodes,” where they would either tackle a social issue, or take the characters out of their normal surroundings to turn up the heat a bit.

Things are a bit different with reality television, so The Brady Bunch isn’t going to Hawaii to find a cursed idol and Tori Spelling won’t turn up on Fantasy Island. Instead, on Bravo TV’s Southern Charm, you will have those rugged Charleston boys roughing it in an RV on the way to Nashville, Patricia Altschul dining on a ketchup-free burger in her car following a trip to the McDonald’s drive-thru, Kathryn Calhoun Dennis on perhaps the world’s most awkward “romantic” dinner for two, and Danni Baird and Naomie Olindo on horseback kickin’ it with Eliza Limehouse on the plantation.

If this doesn’t let you know you are in an alternate universe, I don’t know what will. I hate to say this, but, “jump the shark,” anyone?

Viewers and hopefully most of the cast know that I adore them, and have come to appreciate even the most irritating little quirks, but I am hoping this episode is just a place-holder. You know, that section of a book where you can finally stop for a minute and don’t mind returning some texts or playing your round of Words With Friends (I am @amymfein if you want to go a round)?

So, when we last checked in with our Charmers, Austen Kroll was in a rut, and the boys wanted to go on a guys-only escape to Nashville – through the mountains in an RV. Note to fellas, if you actually wanted to rough it, you might consider leaving the chauffeur at home, but kudos to you for not pretending you were taking turns behind the wheel.

As an aside, I think the show’s producers should continue to round up the parents of the cast, and let them comment People’s Couch-style on their children’s less flattering life choices. I might even consider pay-per-view for this if a) the scenes were well chosen, and b) if viewers could send in questions. Bottom line: Austen’s dad, Mr. Kroll, needs to have a group therapy, Dr. Phil-style confrontation with all of the Peter Pans, no disrespect to Mrs. Kroll, but your man has a certain something-something!

The first escape from the normal day-to-day is Patricia and Michael, fleeing Whitney Sudler Smith’s plant-based prison, and running straight to the golden arches. Well, not running, but driving, in a Bentley, with your own cutlery and linen napkins, and of course, a wine pairing.

I’m dying to know what goes with a McDonald’s cheeseburger.

One can’t take Miss Patricia too seriously, because this lady likes to camp it up, tipping her hand recently by showing some love to my hometown favorite (and fellow Calvert School alum with my daughter), John Waters. Michael is driving in his white butler’s coat, and Patricia is wearing feathers and Chanel sunglasses, because you know the drive-thru folks have seen it all. As special occasion food goes, I’ll take Tour D’argent over Mickey D’s any day.

Onto Kathryn,“preparing” a romantic dinner for two, courtesy of UberEats, in what I’d call “Meatballs on China” with an extra from the Sopranos. Luckily I know this is rebound guy, or else I’d be writing a “Come to Jesus” note to Big Red. I get it, you are with a guy for a long time who recites “The Midnight Ride of Paul Revere,” or “Captain, My Captain” for effect, and so you think you want to hear Tony Monaro’s monologue from Saturday Night Fever, but you really don’t. It wears thin fast, especially when you realize it’s just the same kind of creeper in clothes from Burdines.

Note to Joe Abruzzo, I like the hydrangeas, but in the language of flowers, they symbolize gratitude, which is not what you were going for. Simple guys should stick to roses, with red meaning love, pink meaning thanks, and yellow meaning friendship. It’s like a traffic light: Go, slow down, stop. And yes, KD, you are getting some Felcos or kitchen shears for your birthday. While you cutting off a finger might have brought some relief to the scene, I’m glad you didn’t.

Off to the outdoorsy guy store where the boys are startled by a long-haired cat (foreshadowing that this might not be the roughing it group?). Now I know this is a set-up for the show, but none of you have any outdoor gear of your own? And I might be wrong, but the point of an RV is that you can sleep in it, right? Austen, LL Bean sells a great headlamp. I bought them for my kids years ago so they could read in the car (yes, I’m the mean mom without video monitors).

While this trip has the potential makings of Deliverance, somehow, I foresee an Adam Sandler classic instead – maybe Grown-ups with more really white people.

In the meeting of the minds of the glam squad, better known as “Austen’s Exes,” Chelsea Meissner and Madison LeCroy have a talk which tells us more about the guys than it does about them. While I don’t believe that these two are going into business together, it is interesting to think that two of your exes have opened a shop together.

A light goes off in Chelsea’s head when Madison starts talking about Shep Rose and what he called her. I’ll take a minute to tell the guys out there, that when your guy friends are so deeply in love, they tell their girlfriends all of the things you’ve said about them, which brings me back to Shep calling Madison a “white trash hairstylist.” See Shep? Now Chelsea is thinking that you might have said the same about her.

Off to the great outdoors with guys who still have the tags on their fishing poles. One might guess that they are left there so they can be returned after the shoot. Craig Conover, aren’t you from the eastern shore, near Rehobeth or Bethany? You don’t have a fishing pole? C’mon! Do better when representing the DelMarVa!

Also Shep, it won’t be sexy when you need to be nursed back from a hip or knee replacement in the next few years as opposed to your usual ACL surgery. Have you learned nothing from watching the Thomas Ravenel mudslide?

The irony of the this guy trip is that in voice overs, they all say that guys know how to take the piss out of each other and still be friends, while ladies are more sensitive. Nope. Y’all are soft. Girls might call you out on your words, but these boys do that broody Hamlet thing, and in the words of my son, get all “butt hurt.”

Busting balls, it’s what we do is fine when there is a balance. When it’s ganging up, it’s something else, Shep, and I think you know that. Admittedly, most of the time, Shep is playing chess while Craig and Austen, I’ll call them Thing One and Thing Two in honor of Dr. Seuss, are playing Twister.

Whitney has his own puppet master thing going on, but he’s got producer credit on this whole Sodom and Gomorrah thing, so I’ll leave him out, with the one caveat: If you don’t want to eat camping out food, bring your own in neat little bento boxes.

Over to Airy Hall, the house that Limehouse built. Eliza mentions her epiphany again, when she was late for a plane to the Caribbean, and it crashed, leaving her and her boyfriend alive, and the others who made the plane, deceased. That would shake anyone up, and I’ll try not to be so cynical as to believe that things will backslide into the “same as it ever was sort of thing.”

With Eliza, Naomie, and Danni we hear more about how Eliza’s father Chip Limehouse is cut from the same cloth as Ravenel. I guess we are supposed to imagine what life would be like if T-Rav had kids with his first wife, back in the day and then saved his big scandal for when those kids were in their twenties?

Now I could dissect the Craig morality monologue, but I can’t. If you are not going to lecture yourself and your friends on the same, save it.

I did find Cameran Eubanks’ packing up of the baby clothes touching. I remember doing this myself and thinking my kids will never be those little people again. Perhaps it’s even more so when you have decided to only have one child. I remember at the time, my husband thought I was insane, tearing up over baby clothes. Add that to the list of one more reason he is my ex-husband.

Back to the boys in the van. Whitney, a campsite can be “badass” if it’s your nickname for the Ritz-Carlton, otherwise, it’s not. At best, it’s quaint.

Whoever decided to edit this episode and make it two-thirds Clueless in the Woods overestimated the interest in watching four guys being incredibly unmanly. Anyone else think when the cameras stopped rolling that Whitney called an Uber and went to a nearby hotel (no judgment, I would have joined him)?

I have to say, like Cameran, I can’t get the glasses only thing out of my head, and then my brain goes to that song from The Full Monty, “You Can Leave Your Hat On,” the Joe Cocker version of course.

Anywhoo, off to scene from next week when we find out from nude selfies on the interweb of Kathryn’s rebound man that, according to Madison, his penis looks like a Ken doll. Good times!

See you then, love and light and all that other stuff!