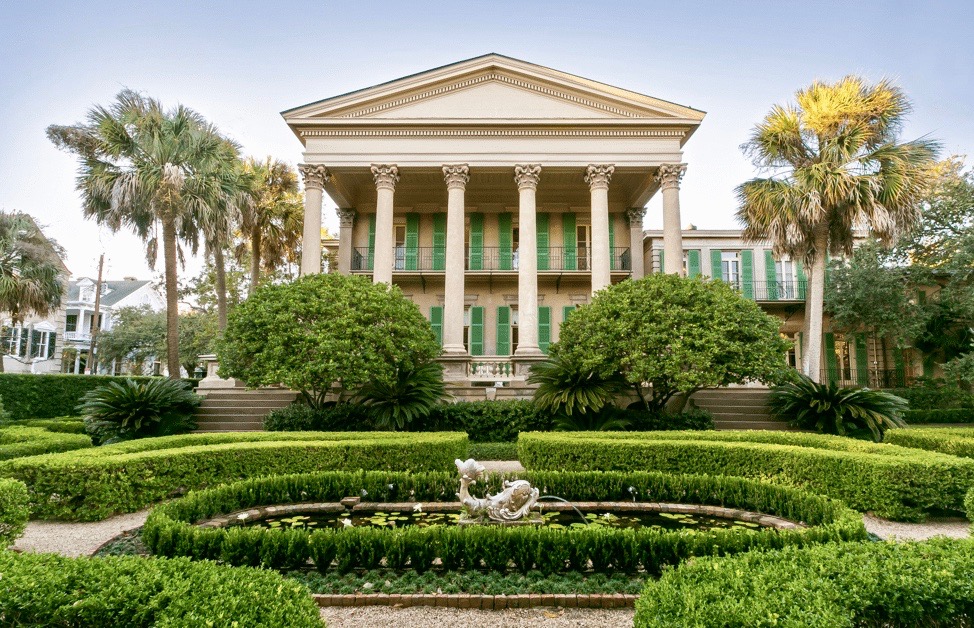 by AMY FEINSTEIN || On some reality shows, fans are eased into a new season with their favorite cast members. Not Bravo TV’s Southern Charm, which got so tawdry, torrid, and dare-I-say tainted in the off-season that it felt the need to catch us girls up by throwing us directly into the deep end of the pool with … wait for it … a MUGSHOT, courtesy of our favorite former cast member, disgraced politician, and once-upon-a-time cocaine “sharer,” Thomas Ravenel.

“T-Rav” isn’t there in person, on camera, but he’s lurking. As Cameran Eubanks says in the opener, she doesn’t want to talk about him because she doesn’t want to get sued (yes, this has been threatened enough times that it sounds like “the check is in the mail”).

We first hear from Kathryn Calhoun Dennis, who is on her own kind of roller coaster from hell as she fights (once again) for custody of her two children with Ravenel – hoping to protect them from the inevitable “ick” factor that will come from his forthcoming legal proceedings.

Bravo has been catching everyone up with a “how they got here” special that makes many fans want to hurl. Not sure if it’s how young Kathryn looks – or the revelation that Ravenel had a French tutor (and says he lived in France) – but Pepe Le Pew probably needs to put in some daily time with DuoLingo while he’s under court orders not to leave the state of South Carolina.

Am I the only one who wants to yell at Kathryn “No! Stop! Don’t” the way you yell at a point guard during the NCAA tournament to drive the damn lane?

Kathryn is talking on the phone to her ride or die girlfriend, Danni Baird, on the day of Ravenel’s arrest. It seems he posted a personal recognizance bond, and slipped out of the police station in time to wash the ink off his fingers and make it to son Saint’s ENT appointment, as the little guy needs new tubes in his ears to stave off those pesky infections. Kathryn tells Danni that she had to hear about the arrest and booking on the news like everyone else, despite the fact that he had the children with him when the Charleston, S.C. police department came a-knockin’ first thing in the morning.

Apparently, this wasn’t a “come by in the morning with your lawyer” thing.

Our favorite Little Mermaid with an edge doesn’t know whether dealings with the police are so commonplace that it’s not worth mentioning you were charged with groping the nanny, or if he’s in denial that this is happening in his AARP years after a lifetime of acting like an alley cat.

Next we have Austen Kroll on the phone with Shep Rose, as the creepy game of telephone has the young Master Kroll sounding glad that the bad press isn’t about him. Shep thinks Thomas can handle himself, but word on the street is that the former state treasurer knows that this won’t be Club Fed, but rather State Pen, and the tables tend to get turned quickly on fellas who wear tight white jeans without drawers.

As an aside, what is it with Shep and the plumber’s crack? Can I suggest some fitted boxer briefs, and yes, you can get them in a nice pima cotton.

Next call, Craig Conover, with what looks like either one nail painted blue, or he closed a finger in the car door. Either way, Mr. Fenwick Island looks refreshed and focused in a way fans have never seen him before, as opposed to looking like an extra from Wolf of Wall Street. You look fab, Craig! Keep it up!

Bravo then plays some news clips where Thomas makes it clear that he denies the accusation … but why, then, is it taking him so long to decide whether to take a plea deal? Maybe your criminal defense lawyer, Cameron Blazer is giving you advice in a Haiku?

In another part of the Holy City, Chelsea Meissner and Naomie Olindo are dishing the hot tea of the day, and wondering if Ravenel’s arrest will finally be the brick that “Plan B” (Miss Ashley Jacobs, if you’re nasty) needs to hit her in the head and compel her to pack her bags. For her part, Chelsea thinks Ravenel’s sometimes plus-one will gladly hold his wallet if and when he is incarcerated.

Swing over to Patricia Altschul’s abode next where the incomparable diva shares that Whitney Sudler Smith has popped into town to rest his weary globetrotting head before heading back out on the road to do his thang. What to do? Let’s throw a dinner party with the gang – well, minus Ravenel and his sidekick JD Madison who are now persona non grata. When making up the guest list, Patricia says, “the landscape has changed.” Boy, has it ever. The entire cast has learned some lessons about “character assassination,” and are now questioning everything monsieur denim blanche ever told them.

As Oprah quotes Maya Angelou: “when you know better, you do better.” Tru dat.

Next is an official introduction to the lovely Madison LeCroy, Austen’s girlfriend, who seemingly never has had an eyebrow hair out of place or a split end. Madison is Patricia’s go-to beauty maven for all things hair and makeup, and she has been dating Kroll the beer brewer for eight months, but not without its bumps (roll tape).

While we don’t meet Austen’s sleepover party crew in the first episode, we hear that one of them will make an appearance in the season finale. You know, the party at which Plan B gets put out on the curb like the recycling.

Here’s a little foreshadowing for fans, there is bad blood between Shep and Madison, and while he doesn’t show his cards, it’s clear they are not fond of each other. Shep starts using words like dalliance, which for him is the equivalent of drawing everyone a dirty picture. In one quick second, Shep has gone full Puritan on us.

We love you, man, but bitchy doesn’t look good on you.

All of this is building up to the dinner party at Patricia’s. Note to self, always let Miss Patricia and Michael plan the menu, because this looks far better than that gentleman’s vegan dinner. As the prep starts and the garlic is chopped, Bravo plays either Italian accordion tunes or Have Nagilla, but either sets the mood. Michael is in his butler whites, organizing seating assignments, and Whitney strolls in, looking more like Darren from Bewitched everyday with his tumbler in hand.

First to arrive are Kathryn and Danni, both proving they were raised right by bringing a hostess gift. KD is nervous, but she and Patricia have come a long way, hanging out on shopping trips and a trip out to California to visit friends, so all is well, as long as the perpetual party crasher doesn’t show.

Naomie shows attends with her “gay bae” Wilson, who looks dashing per usual. I love this guy, and we need to see more of him, but next is Chelsea, who has come stag, but also looks great. Next in is Cameran and Dr. Eddie, who also could show the men a thing or two about putting together an outfit and perfect grooming for a dinner party.

Craig enters with Caroline, who I must confess, I know nothing about. If anyone does, shout at me. But Craig make our lives easier and says, “Miss Patricia, this is Caroline [Smith, FitzGerald, Dubois, whatever]. If there is a next time, you can say, “You remember Caroline, from our dinner cruise with the Hufflepuffs or Whoosiwhatts.”

Next, Dr. Billy and his wife, Madeline enter. You remember Dr. Billy. He was Thomas Ravenel’s doctor, suggested to Shep for a de-pickeling protocol last year (high liver values). Bill and Brian, friends of Patricia arrive next, adding some more panache to the gathering.

Last to arrive are Shep and Eliza Doolittle … I mean Eliza Limehouse, our newest bull in the China shop. Shep, see Chelsea or Madison for a haircut. You are too handsome to dress like Sam Malone from Cheers meets the original Magnum, PI.

Eliza, spit out your gum girl – either in the bushes before using the knocker, or in Shep’s coat pocket, but spit it out, because you are reminding me of Violet Beauregard in Willie Wonka (Violet’s turning violet). And don’t say “I don’t know anybody,” when Chelsea has already said “is that Eliza?”

Also, get to know Chelsea and Madison better, because they can surely hook you up with better extensions. Perhaps Mane and Tail were having a sale, but that’s no excuse, this isn’t Taco Bell.

Bless you, Kathryn for filling in the details about where we’ve seen Eliza before. With Thomas in the barn, gossiping about some girl named Shelby who tells people she’s your kin because you have the same last name. Pure coincidence, I hear. Next, it was in an orange neoprene bikini hosting old fellas by the pool (Bravo only left out the scene at Shep’s birthday party on the boat when you were giving a lap dance if I recall).

Anywhoo, Kathryn has clearly not forgotten Eliza kicked and missed when she was down, and now you don’t recall what you could have ever done to offend her. You aren’t that young, honey, keep up (and just in case you didn’t hear me the first time, spit out your gum … if it’s a breath problem, they make something called Binaca, just-a-spitz will do ya).

And Eliza, honey, this isn’t dinner chat with Thomas and Ashley, save the polo, “crippled old people” talk for them or “cousin” Shelby. Austen is giving you the WTF look. And did you seriously say “when I sit on the toilet?”

Hmmm. And to say Thomas is like family to this crowd who can only guess what kind of family we are talking about? Yikes. Within the hour, Shep will be explaining to the rest of the guests why he brought you, because your date, “Dirty Rob,” I believe his name is, cancelled. Something about a Z-pack. I hear there’s a story there, maybe Dr. Billy could explain with a diagram.

Shep, I do need to thank you for the Yiddish sprinkling of verbiage! Shvitz is always the right word for the south in summer.

Now the wine is poured, so how about some tea? Whitney and Kathryn? Kathryn and Whitney? Oh, Austen, for someone who would like people to forget about summer dalliances … you had that one locked and loaded, but without the extra kick of videotape (first shared here by Will Folks, I do declare).

Well, we promised you the deep end: I’ve heard that Eliza’s (bless her heart) table talk was actually edited so she didn’t look too terrible in the first episode, but all of your tacky bon mots were reported back to your hostess (who doesn’t miss a trick) by other guests.

And it’s not cobbler, it’s pudding. A cobbler can be a pudding, but a pudding is not necessarily a cobbler. I do wonder after watching this if you’ve learned anything. Is that Countess Luann I hear singing? “Money can’t buy you class…”

You sent people fleeing from the dining room!

Words to remember, coattail, worn out, the end.