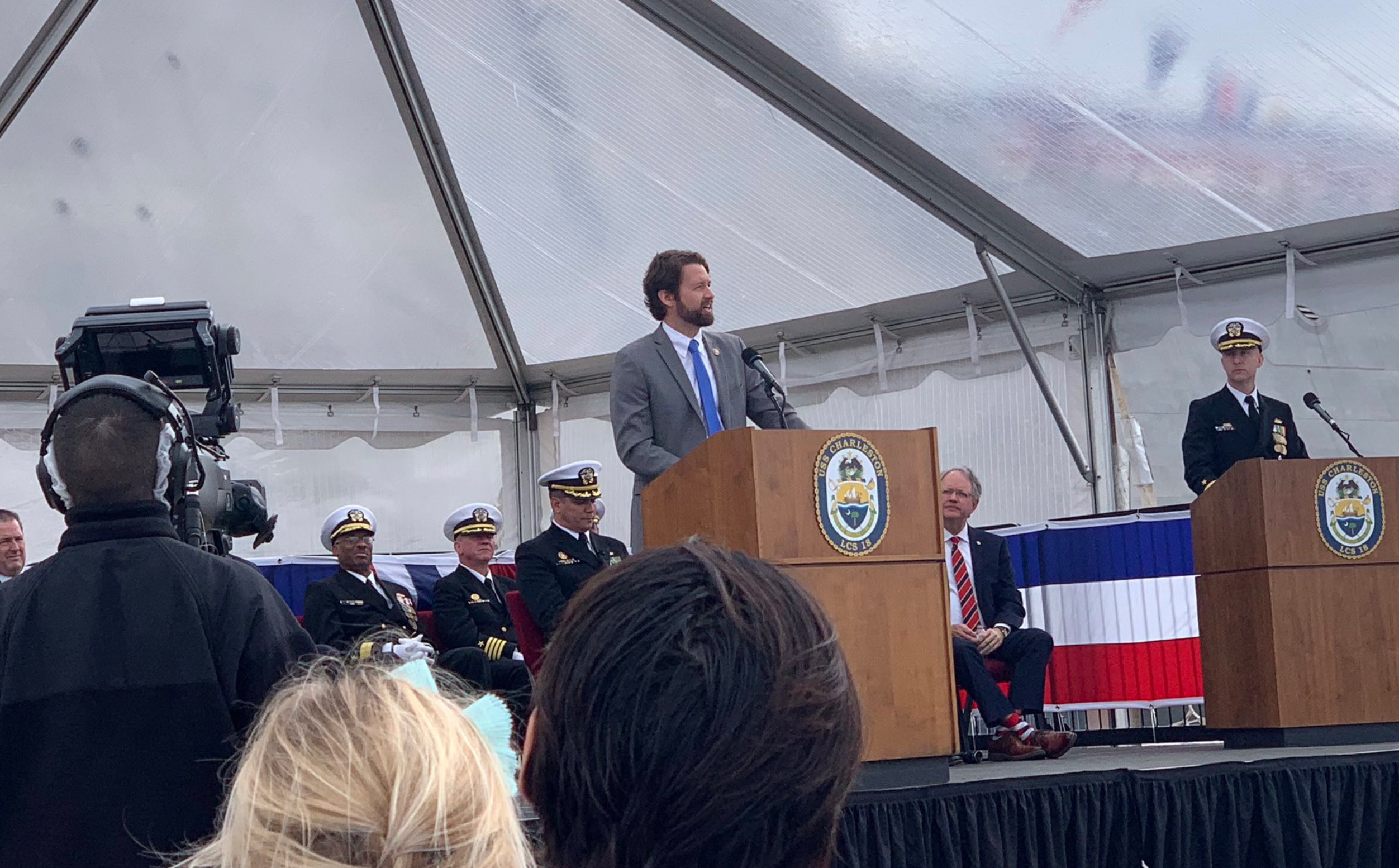 Okay … “clap flap” was probably not the best headline to use for this story.

But it was the funniest headline, so you will just have to indulge us as we explore one of the more bizarre social media misadventures we have ever stumbled upon in South Carolina politics.

(And trust us, they are indeed everyday occurrences).

The drama began on Monday when state representative Lin Bennett of Charleston, S.C. posted an image of U.S. congressman Joe Cunningham ostensibly failing to show proper respect during a ceremony commissioning the USS Charleston, one of the U.S. Navy’s controversial littoral combat ships.

Here is the image …

The image – which bears an uncanny resemblance to a famous photo of then-U.S. senator Barack Obama – shows Cunningham clapping during the commissioning ceremony at a time when others were either saluting or holding their hands over their hearts.

The image immediately provoked a torrent of negative responses.

Among those weighing in? Former state representative Katie Arrington, who narrowly lost to Cunningham in last fall’s race for the South Carolina first congressional district. Arrington, incidentally, is among the frontrunners in early polling for the 2020 election for this seat – assuming she decides to run.

The 47-year-old cybersecurity expert recently took a job at the Pentagon with the U.S. Department of Defense (DOD), prompting some to suggest she might decide to sit out the upcoming election.

“He has no clue,” she wrote in response to Bennett’s post. “Bless his heart … no clue of the sacrifice and honor the Navy brings to this town and nation.”

“The military has always been part of my life and the sacrifice that the red, white and blue and those who serve her deserve a hand over heart, not a clap,” Arrington added.

Accused by one Facebook commenter of being a “sore loser,” Arrington fired back that she “didn’t lie about my licenses and didn’t pretend to be something I wasn’t,” adding that Cunningham was an “embarrassment.”

The “lie about licenses” is a reference to this scandal, in which Cunningham evaded accountability after being caught inflating his résumé in a 2018 political ad. In the ad, Cunningham claimed to be an “ocean engineer” even though he never obtained an engineering license in South Carolina (or any other state).

Even though such claims are in violation of state law, attorneys for Cunningham claimed he had a First Amendment right to call himself whatever he wanted.

Cunningham’s allies pounced on the Facebook post, accusing Bennett of misrepresenting Cunningham and, for that matter, U.S. Senator Tim Scott – who also clapped at the conclusion of the playing of the national anthem at this ceremony.

Scott endorsed Arrington in her congressional bid, incidentally, appearing in a television commercial for her.

Video of the ceremony (above) first obtained by WCSC TV-5 (CBS – Charleston) would seem to support the narrative advanced by Cunningham backers – who accused Bennett and other Republicans of being “desperate.” The clip showed that Cunningham and Scott, as the station noted in its report, “briefly lowered their hands from their hearts to applaud the band at the conclusion of the national anthem, then raised their hands over their hearts again as the flags went by.”

“I too jumped to judgement in reaction immediately thinking this ‘looks’ disrespectful or ‘unpatriotic,‘” Golden wrote. “Lesson learned! Don’t jump to judgement.“

Bennett and Arrington (above) – who were close allies during the latter’s term in the S.C. House – stood by their guns in the aftermath of the fact-check, arguing Cunningham should have kept his hand over his heart until the American flag was “at rest.”

They were also aided by GOP operative Wesley Donehue, who has never met a political scrape he didn’t like.

“It is hard for me to take this seriously when this kind of information flies around the Internet at the speed of (light) from both parties,” Donehue tweeted. “It’s hypocritical to attack Lin. It’s damn near impossible to tell fact from fiction right now.”

We reached out to Bennett early Tuesday to get her thoughts on the dust-up.

“The media’s love affair with Cunningham has been sealed,” she told us. “With all that’s going on, our failure to provide an adequate education for our children, the revolving door of repeat offenders in our legal system, making sound decisions regarding Santee Cooper, and other serious issues going on in our state, it just seems to be a waste of time and energy to find ways to attack little ol’ me.”

“But I’m a big girl,” Bennett added. “I can handle it. My apologies to Mr. Cunningham for upsetting his day.”

Our view on all this? As much as we dislike Cunningham (believing him to be dishonest as well as on the wrong side of any number of pressing issues), he certainly appears to be emerging on the winning end of this particular dust-up.