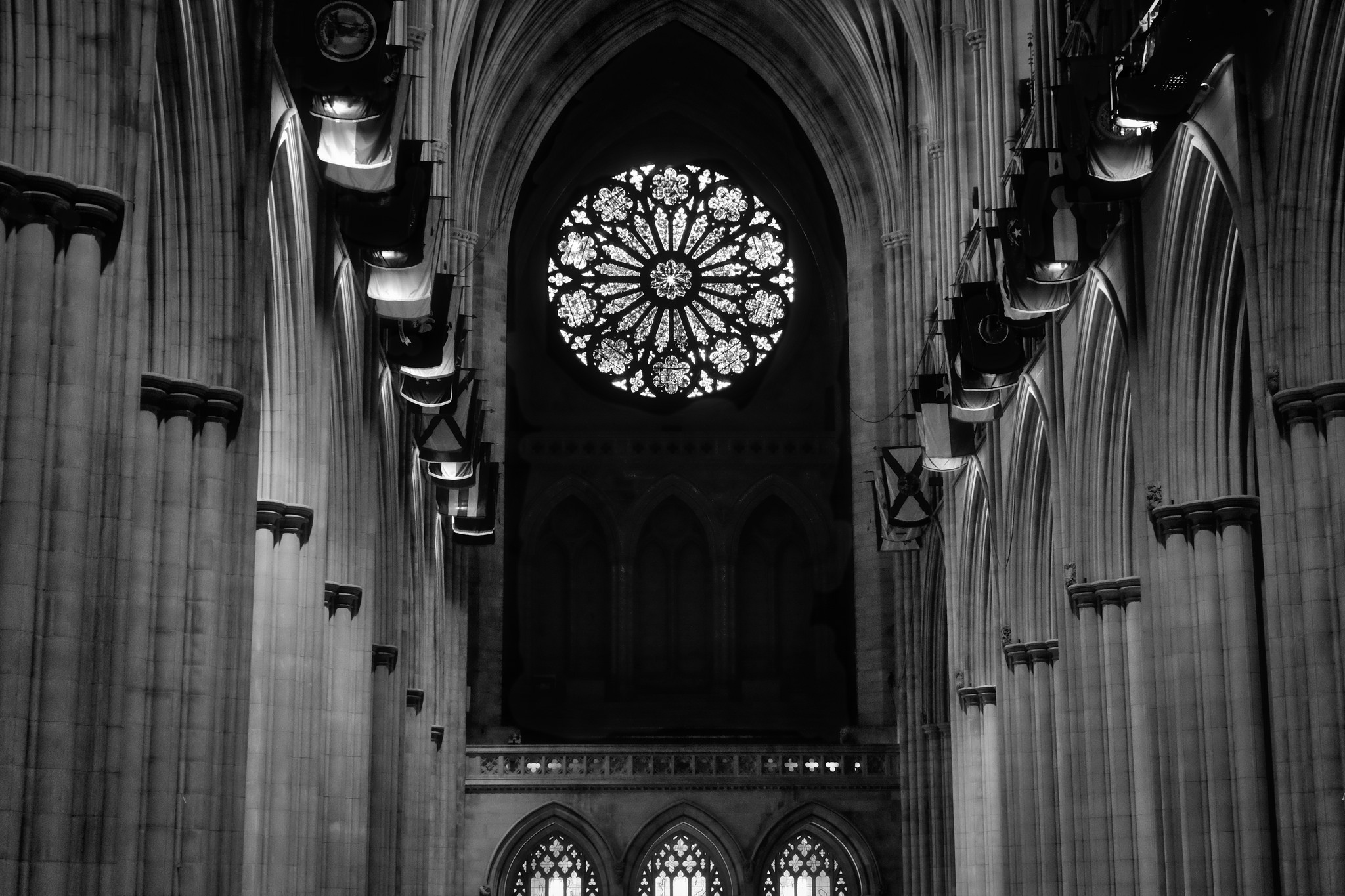 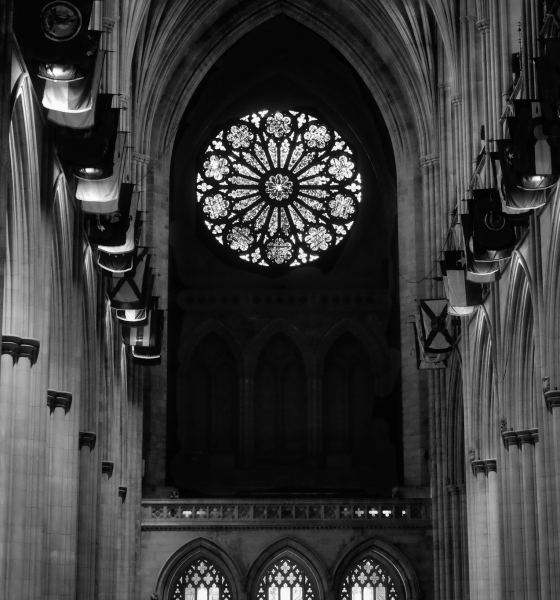 Apologies in advance for another sermon …

by WILL FOLKS || The last time I delivered a sermon like this it seems to have gone over pretty well (or so they told me), so here goes …

Well – let me rephrase that.  I didn’t like the Bushes after I figured out how the world really worked.

Before that … in my formative years,  I did like the elder Bush.  In those days, basking ebullient, excessive and ignorant in the incandescent warmth and boundless optimism of teenage naïveté – unaware of the money pulling the strings of the puppets pulling the wool over our eyes – I liked Bush just fine.  In fact, myself and millions of other Alex P. Keaton wannabes who grew up in nondescript middle class suburbs during the fading autumn afterglow of the “Reagan Revolution,” we all liked him just fine.

Believe it or not, I actually had one of Bush 41’s 1988 presidential bumper stickers affixed to the door of my closet as a teenager.

Hell, it may still be there … a testament to the aforementioned naïveté.

More incriminatingly (and there are probably records that can be consulted on this point), I may have cast an absentee ballot for the elder Bush in the fall of 1992 – operating under the illusion that candidates with “R’s” next to their names subscribed to less government, lower taxes and more individual liberty.

(Yeah … I was obviously high when the whole “read my lips” thing went down).

That illusion lingers to this day for many …

Anyway, the point of this column is not to wax reflective on my personal political evolution from teenage Republican to (raging) middle-aged libertarian … because let’s be honest, you’d stop reading (assuming you haven’t already).

In the event you are interested in the ideologies I espouse, you are welcome to scroll back up and click on our home page when you are done reading this.  If not, to borrow from the ever-loquacious Sir Smoka-Lot, “I understand.”

No … the point of this column is not to rehash the staggering failures of the neoconservative, interventionist foreign policies and budget-busting, entitlement-expanding domestic agendas of the late president and his son, former U.S. president George W. Bush.  Like many politicians before (and since), both Bushes embraced an obscenely, unaccountably big government – one that failed to prosper us at home.   At the same time, they pursued (well, Cheney did) an imperial, unsustainable “new world order” that has failed to keep us safe abroad.  Or for that matter, at home. 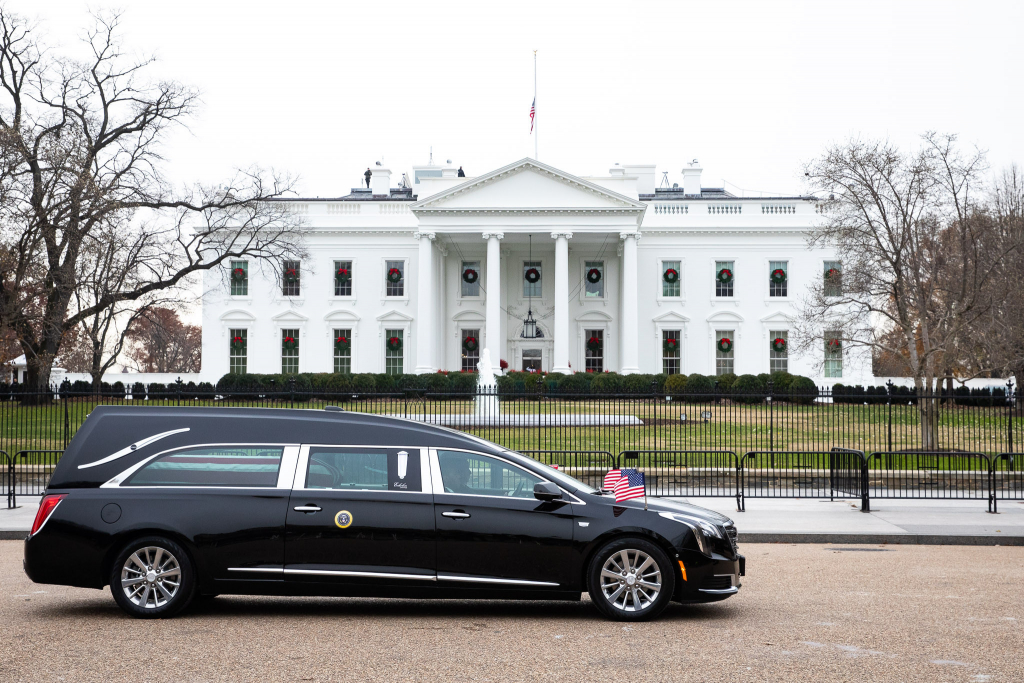 And not just any kind of love, either … true love.

And when I say true love, let me be clear: I’m not referring to the “soul’s recognition of its counterpoint in another,” a cheesy pick-up line from the 2005 comedy hit Wedding Crashers that swept Rachel McAdams off of her feet.  Nor am I referring to even-cheesier vows countless couples write for themselves upon entering into unions that will end in divorce at least half of the time.

Believe it or not, I’m not even talking about the gold standard of “true love,” the 1987 union of the Dread Pirate Roberts and the future Mrs. Frank Underwood in The Princess Bride.

God, I love that movie – although it is certainly harder to watch it now knowing that Princess Buttercup ends up marrying a morally compromised hick from Gaffney, South Carolina.

Talk about longing for the naïveté of youth …

Again, though, that is not the kind of love I am talking about today.

Nor am I talking about romance.  Or infatuation.  Or lust.  Or desperation.  Or addiction.  Or flings.  Or crushes.  Or something that feels like a crush but is probably indigestion.  Or inebriation.  Or a hangover.

No, I am talking about the truest form of love we are capable of knowing as human beings … loss.

In 2005 one of my favorite bands – Bellingham, Washington-based Death Cab for Cutie – released its fifth studio album, a collection of songs entitled Plans.  Death Cab’s commercial breakthrough (No. 4 on Billboard, platinum certification), Plans is best known for its peppy singles “Soul Meets Body” and “Crooked Teeth” – as well as its solemn acoustic single “I Will Follow You Into The Dark.”  But the album had another, less celebrated track from nerdy emo frontman Ben Gibbard that is fitting for today’s topic.

Entitled “What Sarah Said,” the song – which is closest thing to a title track on the album – is all about separation, death, loss and grief.

In other words, it is all about … love.

I’m not going to selectively quote these song lyrics, either, because these honestly are more than song lyrics, people.  Gibbard wrote one of the most beautiful poems about love and loss I’ve ever heard.

So who’s gonna watch you die

“Love is all around you,” The Troggs sang.

“All you need is love,” crooned The Beatles.

“Love is all we have left,” Irish rockers U2 noted on their latest album.

Or maybe you don’t have a song in mind at all.  Maybe you are waiting for me to get to the point.

What the hell does any of this have to do with a dead president?

I’m getting there, promise … 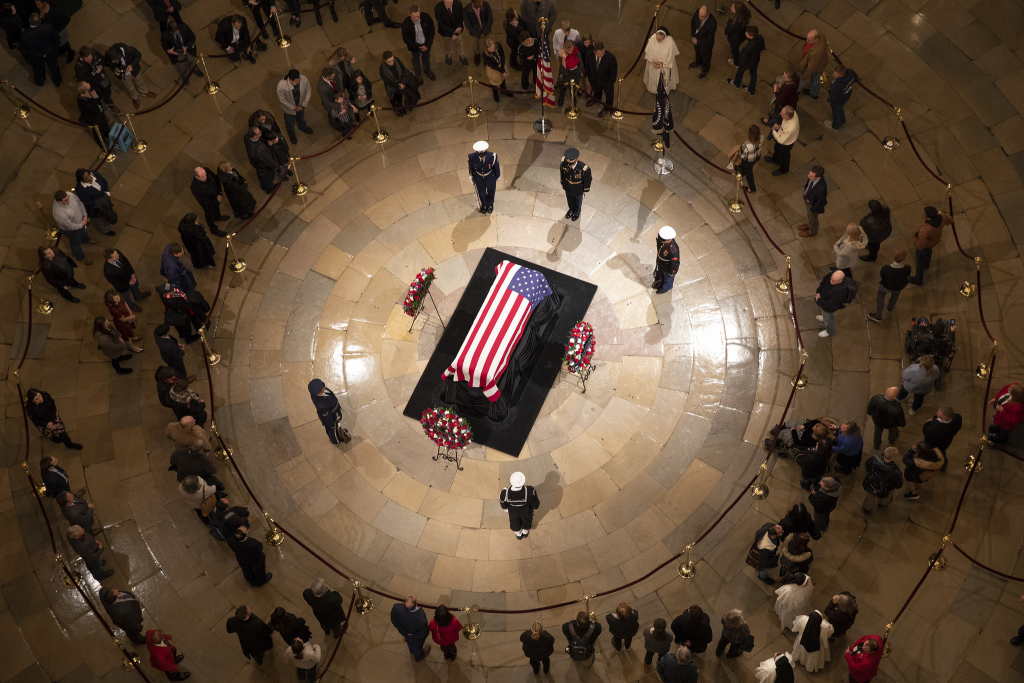 I wasn’t going to write about the Bush funeral today.  My news outlet had already taken note of the former president’s passing with all the dispassionate objectivity it could muster, and I had planned on devoting FITSNews investigative and editorial resources (a.k.a. my time) elsewhere today.

“We offer the Bush family (as well as friends and former colleagues of the ex-president) our sympathies and wish them every comfort as they mourn the loss of a loved one,” the site noted the morning after Bush 41 passed away.

But then a close friend of mine – a woman who within the past year has experienced multiple instances of profound loss – told me I needed to tune in.

“Crying my eyes (out) watching this funeral,” she texted me, urging me to watch.

I didn’t listen to her.  For several hours, I ignored her – and almost completely forgot about her suggestion.  Eventually, though, remembering all she had gone through I decided I owed it to her to see if there was anything left to be seen of the proceedings.

That’s when I stumbled upon a live feed from the National Cathedral … and clicked “play” at the precise moment Bush 43 was wrapping up his eulogy of his father.

So through our tears, let us know the blessings of knowing and loving you, a great and noble man. The best father a son or daughter could have. And in our grief, let us smile knowing that Dad is hugging Robin and holding Mom’s hand again.

Bush offered these lines through his own tears.  Literally.  He was overcome as he spoke.  Hunched over involuntarily.  Choking on his words.  In those few seconds, I watched as a man I literally couldn’t stand surrendered completely to his loss … showing the world (and me) the sort of love you simply cannot fake.

None of the policies, none of the “outcomes” I incessantly focus on mattered.  At all.

As I noted in my recent piece on addiction, things “hit” me.  Well, this was absolutely one of those things.

In that moment, Bush was not a warmonger or a wasteful spender … he was a son and a brother grieving for his mom, dad and sister.  He was someone I would hug, pat on the back, remind that “everything is going to be alright.”  Even if I knew it wasn’t (at least not on this side of the divide).

What is the lesson here?

Go back to the music …

Love is all around us.  It is all we need.  It is all we have left.  And yes, as the indie kids from Death Cab showed us, love is most succinctly, beautifully and perfectly demonstrated (here on earth, anyway) via the totally helpless act of watching someone you love leave you behind.

May we all be blessed with such a loss, right?  It seems an odd thing to wish for, but it is true.  In fact as the holidays envelop us, may we all be gifted with the sort of utterly inconsolable hurt and emptiness that comes from loving – and losing – someone we care about that deeply.

“Love is watching someone die.” 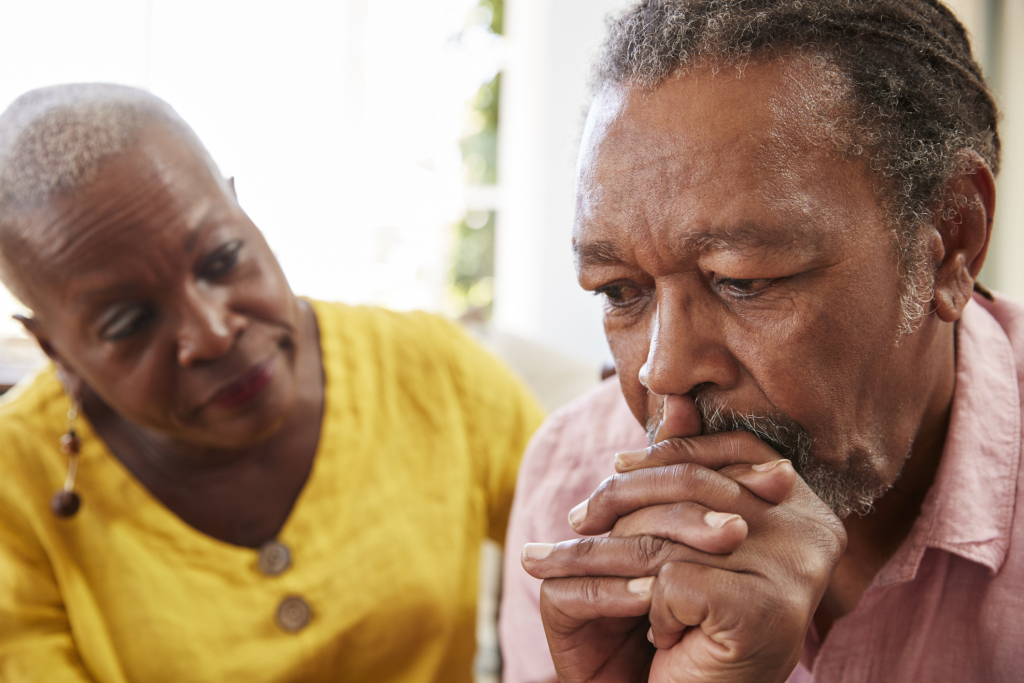 But it the real lesson here goes even deeper than that.  The real lesson is recognizing the commonality this shared grief creates among us – and the obligations it imposes upon us – as we continue our daily walk alongside brothers and sisters of all stripes.

In this fallen age of “all in” political vitriol, of teeming spite and latent hate, of so many people wishing suffering, sadness and death on their fellow human beings over something and nothing all at once … how is it possible that the tears of a president I “hated” could cut through the noise and remind me of what true love is?

Think about that … then think about whether who you are voting for is really worth a hole in your heart.

I still don’t like the Bushes.  At all.  But I don’t have to like them … I simply have to recognize their capacity to love.  And then love them because of that – and in spite of anything and everything else.  In fact, such love is not an option – I am commanded by the God I worship to love them.

Whatever your religious beliefs are, though, if you can’t put everything else aside – if only for a few moments – to love someone (anyone) who is going through such soul-wrenching loss, my advice to you is this: You should probably not count on the eternal love of the creator who put that beating heart in your chest.

Because my guess is barring a major metamorphosis, that love will not be available to you when it stops beating …

Remember this: There is love in those we hate (or those we believe we hate).  And there is hate in those we love.  None of us are perfect.  Every single one of us is completely full of it on some level and completely deserving of anything and everything life throws at us.  Same as the next person.

But we can choose not to throw it back …

General opinion’s starting to make out that we live in a world of hatred and greed – but I don’t see that – seems to me that love is everywhere.  Often it’s not particularly dignified, or newsworthy – but it’s always there – fathers and sons, mothers and daughters, husbands and wives, friends and strangers.  When the planes hit the twin towers, as far as I know, none of the phone calls from the people who were about to die were messages of hate and revenge – they were all messages of love.  If you look for it, I’ve got a nasty suspicion you’ll find that love actually is all around …

Got something you’d like to say in response to one of our stories? Please feel free to submit your own guest column or letter to the editor via-email HERE. Got a tip for us? CLICK HERE. Got a technical question or a glitch to report? CLICK HERE. Want to support what we’re doing? SUBSCRIBE HERE.
Banner: Brendan Ross via Flickr