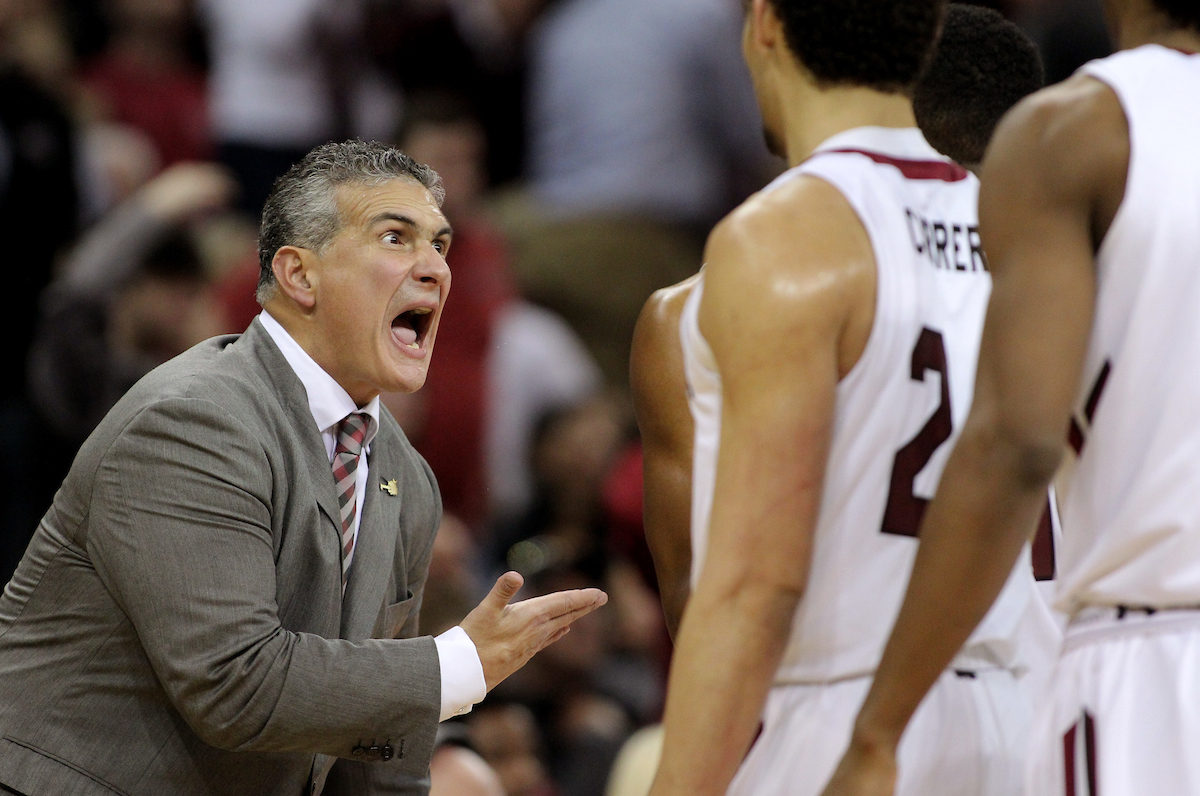 IS FRANK MARTIN’S PROGRAM STILL ON THE UPSWING?

The University of South Carolina men’s basketball program is on the upswing at the moment under Frank Martin, who is entering his fifth season as head coach of the Gamecocks.

Martin inherited a program in shambles, and his first two seasons in Columbia, S.C. were unmitigated disasters.  Martin’s teams posted a 28-38 record (and a 9-27 conference mark) during that stretch – finally breaking even with a 17-16 mark during the 2014-15 season.

Last year the team experienced a breakthrough … although South Carolina was snubbed by the NCAA selection committee despite its 25-8 regular season mark.  The program has also experienced some high-profile disciplinary issues of late – leading to the dismissal of freshman ballers Eric Cobb and Jamall Gregory.  Sophomore Marcus Stroman also left the program – as did freshman Raymond Doby.

Nonetheless most observers believe South Carolina – which hasn’t made the Big Dance since 2004 (and hasn’t won an NCAA tournament game since 1973) – is on the right track under Martin.

One dissenting voice?  Columnist Drew Mueller of The Daily Gamecock.  According to Mueller, Martin has failed to consistently land top recruits at South Carolina – especially this year, at the peak of the program’s success.

Specifically, Mueller claims Martin’s strategy of landing a top four-star recruit each year and supplementing them with less-regarded prospects is failing to produce sufficient “star potential on this team.”

“We need more highly recruited talent in the program,” Mueller wrote.  “Better players will help others in practice compete and learn, which will allow South Carolina rise up in the SEC ranks and get back into the NCAA Tournament. It’s that simple. However, I’m not sure if coach Martin can recruit that well outside of South Carolina on a national scale. Frank Martin is a fan favorite in terms of his person, but coach Martin might not be the caliber of coach we need to head our program at South Carolina.”

Not surprisingly, Mueller’s article was assailed by Gamecock fans (who are among the easiest in the nation to troll).

Is he right, though?  Guess we’ll find out soon enough …