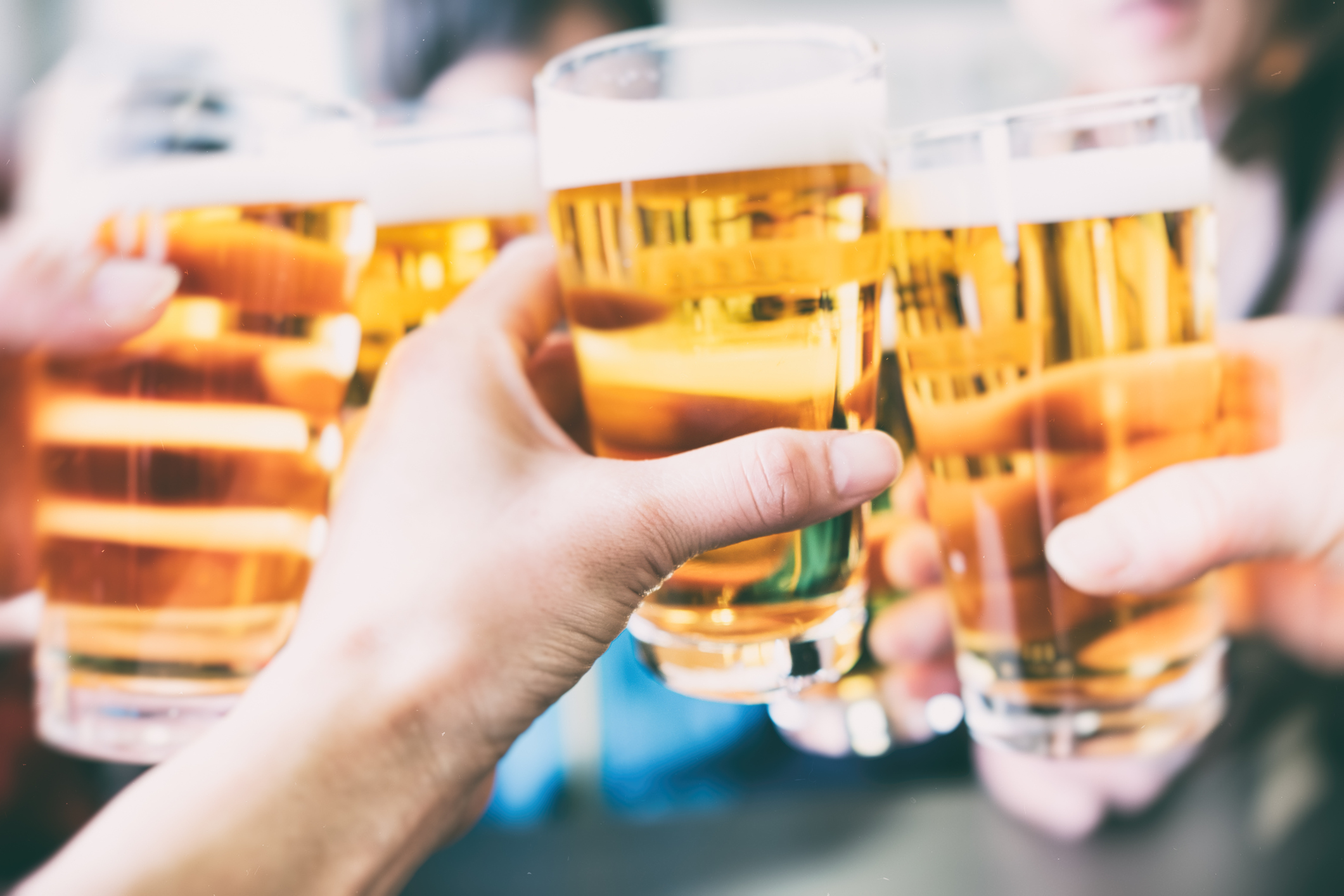 by AMY FEINSTEIN || When we last left the cast of Bravo TV’s Southern Charm, Plan B (a.k.a. Ashley Jacobs) was threatening not to return to Charleston, South Carolina after her California vacation.  Thomas Ravenel didn’t seem to care, so it was clear she was coming back to the Palmetto State to complete her mission.

This episode opens with Craig Conover and Austen Kroll taking a little road trip to Thomas Creek in Greenville, S.C. to visit Austen’s brew.  Craig explains his “claw” – which is a brace he has to wear after damaging two tendons whilst trying to stab a wall with a butter knife (yeah, it’s as dumb as it sounds).

In the car they chat about Austen’s love life, better known as Victoria or Chelsea Meissner (spoiler alert, don’t bother getting to know Victoria, more about that later).

They arrive at the brewery to taste Austen’s beer for the first time, and Craig finds it fruity, but likes it – although he admits his preference for “college beer” (a.k.a. the cheap stuff often found in kegs at frat houses).

Road trip success, the beer will be ready to roll for Austen’s debut party.

There's something calming yet exhilarating/beautiful about being surrounded by of a plethora of oak barrels filled with beer.. Thanks to my buddy @clintyeastlord for showing me around his 'new' stomping grounds ?? #drinklocal #scbeer #craft

Kathryn Dennis and Craig then sit down for a Cappuccino and a chat. Craig does his best Señor Wences imitation with his hand brace.  Personally, I think Craig is channeling Dr. No, but maybe Dr. No in high school. Mr. Craig No.

Kathryn tells Craig about her job at Gwynn’s and says she’s happy.  Even Thomas has been supportive, and quoted her a poem by Rudyard Kipling called “If” possibly betraying his plot along with his “Cali Girl.”

If you can wait and not be tired by waiting,
Or, being lied about, don’t deal in lies,
Or, being hated, don’t give way to hating,
And yet don’t look too good, nor talk too wise;

Wow, Thomas quotes Kipling from memory while being a devotee to Sun Tzu and other bellicose philosophers.  Somehow another work comes to mind when I think of Thomas Ravenel and Kipling.  He seems a bit more Jungle Book than “If.”

Great … now “Bare Necessities” is stuck in my head.

Keep on keeping on KD with your Art of War self!

Craig ponders why Plan B still has no job, and continues to live off the fat of the land. Kathryn wonders out loud when Thomas stopped being cheap.

At this point Bravo runs the scene where Thomas makes Kathryn what turns out to be an empty promise about her lifestyle if she has a baby.

Ah, but that’s all water under the Ravenel Bridge now.

Next scene without a segue, we see Thomas, who essentially told Plan B to take a hike, show up at a jewelry store, Corneau Goldsmithing, to buy her a gift.  The show will continue to tease the engagement ring storyline, but Thomas has a sketchy background with engagement rings, and is willing to sue to get them back when things go wonky.

Thomas tells the woman at the desk that he’s waiting on a friend.  Picturing Thomas and Whitney Sudler-Smith as Mick and Keith Richards singing “Waiting on a Friend,” which according to the internet is either about friendship between two men or drugs. Hmm.

In his confessional, Thomas is doing his fingers interwoven politician pose (old habits die hard).  He admits that he and Plan B did not part on good terms … so what do you do? Reward bad behavior with something shiny.

“There are things about Ashley I find fault with. She at times can be a little controlling…But at the end of the day I do want a partner in the business of life.”

Considering the racist jokes Thomas made about Italians talking with their hands, he’d better look out, it seems to be catching.

Thomas is mostly in the market for a “Ravenel” family crest ring, and is thinking he’ll have a matching one made for his plus one. Thomas, the gold-digger handbook specifies nothing less than three carats! Catch up on your reading!

“Weren’t you going to send her packing last week?”

If this were a forties movie, Whitney would have slapped Thomas and told him to come to his senses. But alas, tis only a Bravo showing 2018.

Thomas tells Whitney that Plan B brings him a little stability, and Whitney’s eyes almost pop out of his head. Stability is not the word anyone would use for Ravenel’s “Cali Girl.”

“It would take a squadron of psychoanalysts to figure out his relationships.”

Whitney, you are brilliant! I think you have your next Bravo show “Restructuring Ravenel,” where a team of shrinks each take a swipe at him, and the one who makes the best diagnosis gets to be his therapist for life.  Call me, Whitney, we’ll work out the details.

Thomas continues … saying that the whole clan Ravenel loves Plan B.  Maybe we can make the show a group deal.

Whitney has perfected the incredulous nod.

In my mind, there is a whole spectrum in between, but let’s go with that. Thomas doesn’t know once again whether to choose Plan A or Plan B.

Craig pops into the fabric store, and … I can’t even. What about Patricia Altschul says clip art?

Next, Shep Rose pops into the bowling alley and does a brief semi-strip tease to put on his knee brace while waiting for Kathryn.

Bowling is for people who have extra talent to spare ;) kidding I am officially good at gutter balls. Thanks @thealleychas and @relationshep so much fun!

Yes folks, these two are the Charleston Ken and Barbie.  I think it’s beshert, but you draw your own conclusions.

Throw in the foreshadowing when Shep says “When somebody nurses you back to health, you fall in love with them. Cue to Kathryn bringing him soup and gummy bears, the breakfast of champions.

All things aside, Shep, you have never looked happier than hanging with Kathryn. Just saying …

Kathryn reveals in her confessional that her time with Shep was not a one-time deal.  Sure, it was complicated by Thomas (who will secretly hate Shep for the rest of his life).

“We have good sex, whatever, and he’s cute.”

I think everyone agrees that this should be your goal right now.

The rest of the episode is all about Austen’s beer reveal. The next scene is casa Ravenel aka the house of pain, where, shocker, Plan B is back to fulfill her contract.  Things are not cheery.

“Things have not improved, perhaps they may have regressed.”

Austen sets up outside for his party, and is taking all comers when it comes to naming his beer. Bro Brew? Austen’s Affluenza? Hoppy Trails?

Austen’s citrus fruit-infused beer is a hit, and everyone seems genuine in praising it.

J.D. Madison arrives.  Exactly what he adds to the show other than contempt is a mystery. It’s like the older, pervy cousin your mom makes you invite to Thanksgiving out of guilt.  It’s clear JD is there for beer.  And does he have perpetual sunburn, or is that the hooch?

Then Thomas arrives with Plan B and sucks the air out of the party, and admits they’ve been fighting. Tant pis.

Plan B has to tell Thomas to stop staring at Kathryn.  Awkward.  She then confesses to Craig that things aren’t going well.  She is feigning fighting tears as she tries to fulfill her aspiration of being Southern Charm’s villain with a heart.

Is it me, or is she hitting on Craig?  Maybe Plan B is seeking her own Plan B?  Curious.

To have been a fly on the wall when Thomas was pitching her to Bravo.

Who would sign up for this and not get paid?  Are you that thirsty honey?  Well, I don’t have a cold beverage for you, which is why I don’t use your name in these recaps (although it seems my editor keeps parenthetically referencing you).

Thomas kisses Kathryn’s head, petting her like a pony as he says hello. Then Shep shows and sits next to her, also fawning and petting.

Shep starts the conversation on Thomas’ gut, and throws subtle shade about the fact that Thomas wore the same sweater during his Daufuskie Ferry freak out.

The description under Victoria’s name says “Austen’s girlfriend,” but there is a sense she is about to get voted off the island. What do you think, Chelsea?

And yes, trepidation is a word.

Austen’s girl-friend weighs in, and yes, Victoria is voted off the island. Sorry Vicki, we didn’t even learn your last name!