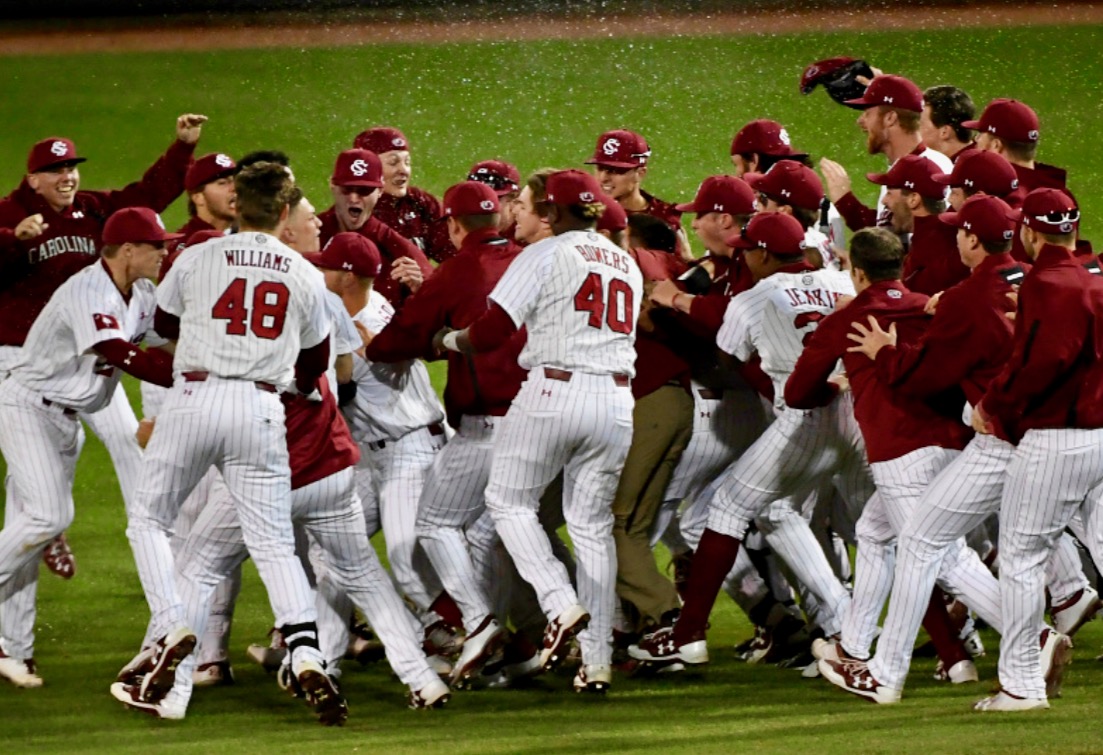 Unranked South Carolina dealt the No. 14 Clemson baseball team its first loss of the 2018 season on Friday – using a sacrifice fly from junior outfielder TJ Hopkins in the bottom of the ninth inning to clinch a walk-off win before a capacity crowd of 8,242 at Founders Park in Columbia, S.C.

The Gamecocks (7-3) and Tigers (8-1) will meet again on Saturday at 3:00 p.m. EST at Fluor Field in Greenville, S.C. for the second game of this year’s Reedy River Rivalry.  The series will conclude on Sunday at 2:00 p.m. EST at Doug Kinsmore Stadium in Clemson.

South Carolina is looking to get things back on track under first-year head coach Mark Kingston, who was hired seven months ago to turn around a program that fell apart under former head coach Chad Holbrook  (who has been given a fresh start at the College of Charleston).

Junior pitcher Adam Hill was dominant for the Gamecocks, holding the Tigers’ potent offense hitless through the first five innings before surrendering at two-run homer to junior outfielder Seth Beer in the top of the sixth inning that gave Clemson a 2-1 lead.  Hill – a native of Anderson, S.C. – racked up fourteen strikeouts against the Tigers, giving up only two hits and two walks.  He did not factor in the decision, however.

“He’s developing into one of the top pitchers in the country,” Kingston said of his ace hurler after the game.

Kingston’s team tied the game in the bottom of the eighth inning thanks to a clutch pinch hit home run from senior infielder Matt Williams, a native of Honea Path, S.C.

Williams drilled a pitch from Clemson reliever Owen Griffith into the right field bullpen to tie the game at two runs apiece – setting the stage for Hopkins’ heroics in the bottom of the ninth.

South Carolina is looking to reestablish itself as a national contender after a rocky 2017 season. The Gamecocks began last year ranked as high as No. 4 in the nation but they fell apart down the stretch – dropping eight consecutive SEC series to close out the year and missing the NCAA tournament for the second time in three seasons.  Prior to 2015, South Carolina hadn’t missed the NCAA tournament since 1999 – a sixteen-year run that included four trips to the College World Series final (2002, 2010, 2011 and 2012) and back-to-back national championships in 2010 and 2011.

If Kingston wants to lead the program back to the promised land, he’ll need more wins like this against nationally ranked opponents.

Clemson, meanwhile, is in its third season under Lugoff, S.C. native Monte Lee – who has guided the Tigers to back-to-back 40-win seasons and NCAA regional appearances.  Clemson also won the 2016 ACC tournament title, although the pressure is on Lee this season to lead his team to the College World Series (CWS) – where the Tigers haven’t appeared since getting bounced by South Carolina in 2010.

In fact Clemson hasn’t made it past the regional round of the NCAA postseason since 2010.

Got something you’d like to say in response to one of our stories? Please feel free to submit your own guest column or letter to the editor via-email HERE. Got a tip for us? CLICK HERE. Got a technical question or a glitch to report? CLICK HERE. Want to support what we’re doing? SUBSCRIBE HERE.
Banner: Gamecock Baseball

Don’t Call It A #QuinnBack