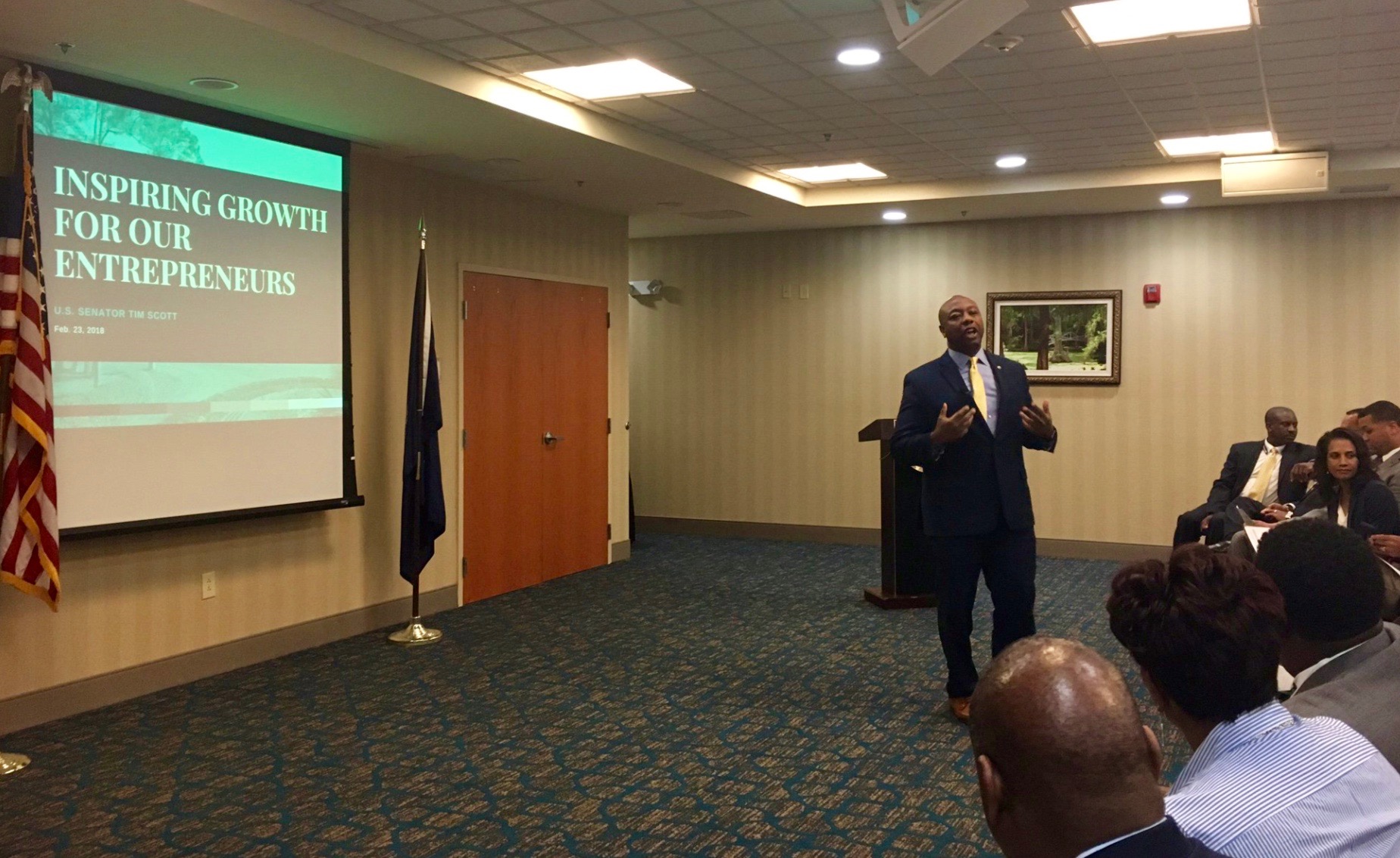 U.S. Senator Tim Scott met with dozens of minority business owners at an event in North Charleston, South Carolina last week.   The gathering – hosted by Scott’s office and the South Carolina African American Chamber of Commerce – featured a “productive discussion with some inspiring local leaders,” according to a tweet from Scott.

Stephen Gilchrist, the leader of the black chamber, agreed – calling it a “great meeting between Senator Scott and black business leaders.”

Gilchrist told us he was encouraged to see so many “black leaders (who) are not establishment blacks” in attendance, adding that events like this “may be signaling a tide change in black politics” in the Palmetto State.

Is he right?  Possibly … although as we’ve noted on numerous prior occasions “Republicans” and Democrats in Washington, D.C. (and at the S.C. State House) have become virtually indistinguishable on the vast majority of issues.

Still, Scott is one of the better GOP votes in our nation’s capital – standing in stark contrast to the leftward lean of liberal U.S. Senator Lindsey Graham.  As a result, Scott continues to receive the support of broad swaths of “Republican” voters in South Carolina, whereas Graham does not.

Scott played an integral role in the passage of the GOP tax plan, which has undergone a surge in popular support as increasing numbers of Americans have seen a boost in their paychecks thanks to the new law.

No Democrats voted for that plan, incidentally … a rare point of contrast in our increasingly monochromatic (a.k.a. #TeamPurple) capital.

This news site was never thrilled with the GOP plan … arguing on multiple occasions that it didn’t provide enough relief to middle income earners and small businesses (and didn’t make deep enough cuts to government).  We still view it as a missed opportunity.

Also, the jury is still out as to whether the plan will stimulate the economy …

Nonetheless, we believe Scott did his best during negotiations to advance the interests of those who needed (and still need) relief the most – including those black business owners he met with last week in North Charleston.

South Carolina is facing some serious economic challenges right now … and solving them is going to require us to set aside our surface differences aside and work together for the good of everyone.  More importantly, it’s going to require a fundamental reorientation of our current (failed) governing philosophy – which embraces unsustainable spending and crony capitalist handouts at the expense of the taxpayers and job creators.

Got something you’d like to say in response to one of our stories? Please feel free to submit your own guest column or letter to the editor via-email HERE. Got a tip for us? CLICK HERE. Got a technical question or a glitch to report? CLICK HERE. Want to support what we’re doing? SUBSCRIBE HERE.
Banner: @SenatorTimScott