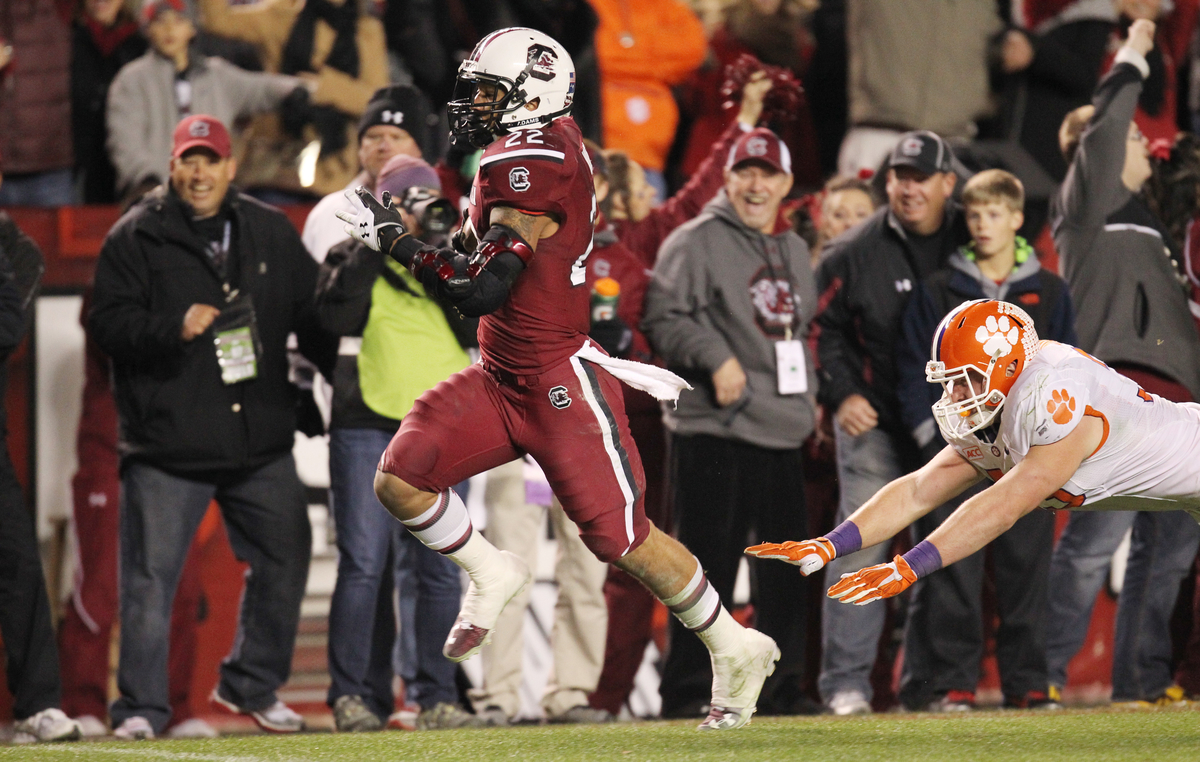 The University of South Carolina football team got “one for the thumb” in 2013 – defeating arch-rival Clemson University 31-17 to capture its fifth straight victory in the long-running series.

According to ESPN’s ACC football reporter Heather Dinich, Gamecock fans had better start warming up those thumbs on their other hand …

“South Carolina wins six in a row,” Dinich predicted last week. “If Clemson couldn’t beat South Carolina WITH Sammy Watkins and (Tajh) Boyd, why should we give them the benefit of the doubt without their record-setting quarterback, leading receiver and leading rusher?”

And while Dinich also points out that the Gamecocks are also losing their share of talent heading into next season (including Connor Shaw, Jadeveon Clowney, Bruce Ellington, Kelcy Quarles and Vic Hampton) “the difference is that South Carolina has continued to win in spite of previous losses like that.”

She’s right … which is one reason why ESPN’s SportsNation poll is currently leaning 56-44 percent in favor of another Gamecock victory.

South Carolina and Clemson meet in Death Valley on November 29. The Tigers hold an all-time 65-42-4 edge in the series – and prior to the Gamecocks’ current streak had won 10 of the prior 12 meetings and 25 of the previous 35.

South Carolina is to the point where losing to Clemson in football, is like losing to a tier two school, like Coastal or Chas. Southern.

A loss to Clemson for SC is a sign that something is WRONG w/ the program.

The funny thing that Clemtech does not get is how much more money USC has than them. Last year, Clemtech brought in and spent 63 Million, South Carolina brought in and spent 82.5 Million. This is prior to the SEC TV Deal which on the low end of estimates will add an additional 13 million. That is 32.5 million dollar difference a year.

Also, the AD you hired almost destroyed Georgia Tech. GT wants to fire Paul Johnson, but they can not afford to bc of the contract he agreed to, which is just like the contract Dabo got. If Dabo leaves, he has to pay a small buyout in comparison to Clemson firing him, where they must pay out the FULL CONTRACT. What the hell is that. When Chad Morris leaves, which is trying like a anything to leave, and bowl cut boy takes over, Clemson is screwed.

This brings me so much joy to watch them suck this bad in almost every sport.

So winning an Orange Bowl over Ohio St. is “sucking”? What does that make winning a Credit Card Bowl?

You still lost to us, and we still finished the season with a higher ranking. Enjoy your oranges, we’ll enjoy our #4 spot. :)

Cluck Flemson!!!!!
The forrestry program at Clemsux, trains freshman to harvest trees leaving 3 ft stumps, that way their graduates in animal breeding can reach the cows and horses for a better screwing!
I’ve always wondered, is that where Haley, Harpootlian, Knotts and the Peelers came from?

No, your’e confusing it with where your daddy came from.

That is why my son looks like a goat and asks, “where’s my ddaaaaadddyy”! I’m a product of stump bovine sex.

Well 2 clemsux offspring, products of beastiality!
Yo Daddy Senior and Yo Daddy junior!

I hope you enjoyed your bowl welfare. The only reason you got to the Urange bowl was the 2 BCS Bowl spots Cap per conference. Second, Ohio State was a joke. And Third, If you watch the game, it is what I call Monkey Humping Football. It was a horrible game that looked like neither team wanted to win.

Fear The Left Hand. It’s coming and you are scared to death bc you can’t afford to fire Dabo for the next 5 years.

If Carolina opened against Clemson, you might have more of a point. Dylan Thompson is a new starter, but starts more experienced than anyone on Clemson’s roster, and will have the season to develop further.

And he’s also defeated Clemson once already…in Clemson. But let’s not rain on OrangeDNA’s parade. At least his long-term memory is intact.

“Thank goodness, all their greatest players finally left! Maybe we can win this time!”

Ohhhhhh, the shame if you still lose… It will be delicious.

That “newbie” quarterback is 1-0 in Death Valley. Haha.

Oh the past reply, translation, If you cant beat them any more, close your eyes and remember those glory days in the 80’s. FYI “newbie Quarterback?” Why you know the Gamecocks have a QB that already won in Death Valley and you have No Tajh, No Watkins, and a cheerleader for a coach. Good luck with that, High 5, Bring me a 6 pack, 1942 days and still counting. Booya!

True, Watkins and Boyd are gone but so are Shaw and Clowney. I’ve lost interest in this match up after Clemson lost the last time to the Gamecocks. Losing five times in a row to a flock of peckers is unconscionable and don’t think Tiger fans have forgotten it.
However, you have to look past a team who has beaten you five times a row but never won a BCS bowl game or much less an SEC conf. title. They are but small fry in a large pond.

Sucks losing to small fry in a large pond five times running, and counting, doesn’t it?

Does it sting? Absolutely it does. Makes me sick in fact.
However, given Clemson’s higher profile it makes sense to treat the coots as just another game on the schedule, no more, no less. There are bigger stakes here than soley concentrating on beating the in state rival. Besides, we own the all time record in case you forgot.

#butthurt USC ended the season at #4 am I right? Wasn’t the orange bowl like being the smartest kid with Down’s Syndrome?

What’s that saying…”I don’t have a dog in the fight, but I hate Carolina, and when Clemson loses, I am not a fan, but when they win, I am.” Yeah, thought so. High 5.

What’s that saying? “My little bitch came back”, or “Lebron ego, waterboy talent”

There they are, I was wondering how long it would take before these “two” came running along. I notice they don’t post anywhere else, Dirtpeckers are their life, they have nothing to contribute to any other topic. “If it ain’t Dirtpecker, it ain’t worth talking about”.

“these “two” came running along”. so you think I am Carls Jr. or he is I? You are a dumb fuck to think that and to answer another part you said “I notice they don’t post anywhere else” I have in fact responded to many other of your bull shit, the most recent to another poster that seems to think you are just as big of a dumbass as I do when he called you “Mr. Holmes” in a political post, you know the one (I understand you are too dumb to see what he meant, so I will help. he said “Mr. Holmes” as in Sherlock Holmes in reference to you being captain obvious but also being so fucking wrong in your attempt that it was just funny, in a post about a cop parked in the grass. I know you know what this means). Also I notice his comment had many, many ,many up votes, so now I know others think you are just as full of shit as I do even out side of the “dirtpeckers” comments you jerk off to thinking they are so funny. You are so beneath me now as my “Squishy is my bitch” posts I no longer have to respond to your replies to my comments that you are a bitch if I don’t feel like it ( FYI my comments of you being a bitch get more upvotes than your original posts, so I will keep them up if I want to, just because I can, and since others like them more than they like your BS, AND we know you to be a pussy ass that cant do shit about it, knowing I have offered to meet in person and talk about it, and your repeated ignore of said offer prove you to be a pussy or a bitch why wouldn’t I? I’ll offer again, want to meet to chat? I am sure that’s a NO from you in one way or another. If you really were even a JV D2 player as you claim, you must have some sort of respect for yourself and want to stand up for yourself, but the punk outs prove you to be nothing better than a bitch. So come on back. you have been brought down in every part of the words, lets see what you got bitch.

Wow, you’re a little wound up today aren’t you Scooter… and I’m not reading all that, if you had anything to say of any importance you could have done it in a short paragraph. From what I can see by glancing it at it it’s nothing but your normal ranting.

We both know you read it and punked out yet again just like it said you would. Typical bitch move by you. Short enough little man?

Even your short messages don’t have anything worth reading.

Sorry to inform you but I really don’t intend in getting into one of your little pissing matches again regardless of how hard you troll.

Ha, but you already are now. Check mate little bitch

Is that anything like, “Alabama mouth, Vanderbilt trophy case”?

No one thinks of Clemson as a higher profile anymore. At least not the coaches that voted in the polls, or the sports stations that show college football, or talk about college football, or the AP voters, or the computer voters, or the BCS voters, or the fans anymore. Clemson used to be a “higher profile” team in the past, but now they are getting beat by the only good teams they play, and as they all say USC is one of them. By the way, since its just another game to you and “your” team, why do they have the count down clock?

I guess the coots losing to Tennessee would place them as a high profile team?

You get style points for coming up with the most novel way to rationalize this streak (and there have been hundreds): “I’ve lost interest in this match up.” That’s a good one. But it is too early in the streak for that…that phrase is more appropriate for your bball streak with UNC. I see what you are saying, but no one here is going to treat it as just another game on the schedule. Not gonna happen.

Enjoy your athletic success SC. It has come with a price. As sad as it is to lose, it must really suck that CU kicks your ass academically.

You know your football program has fallen on hard times (relative to the Cocks) when you start pulling out the “we kick your ass in academics” card.
Lol, dude. Seriously, lol.

Hey, I thought you were above ever coming back on this site like you said, yet here you are TROLLING along with nothing better to do again. What a pathetic life you live.

Thank you, Coach Spurrier. It has been so much fun. I can hardly wait until August 28th.

Not a Clemson or a Carolina Fan, as I played against both schools.
But, in Clemson’s defense (an oxymoron)
“That’s Why We Play The Game.”
May the best team win.