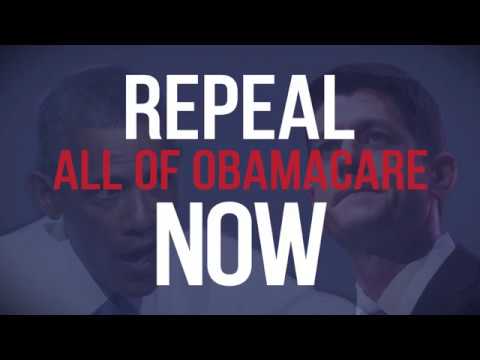 “It is catastrophic and disappointing that House GOP Leadership along with Chairmen Brady and Walden are pretending that their proposal is an Obamacare repeal, when it fails to even reach the minimum repeal standard passed by Congress in 2015 and vetoed by then President Obama.

“Congressional Republicans have been entrusted with leadership largely due to their oft-repeated promise to repeal Obamacare, the Ryancare bill accepts the underlying principles of the failed health care law, and attempts to fix it. The Ryan bill is indefensible both from a policy and political perspective.

“Americans for Limited Government produced this video to remind Republicans of their promise to repeal all of Obamacare. It is crazy for the GOP to try to go back to the American people and tell them that the rules of Congress prohibited them from re-establishing state based health care solutions, and instead they should be happy with a mutant national health care plan. For the first time in six years, Nancy Pelosi sees a pathway to holding the Speaker’s gavel again, ironically through the GOP’s planned failure to keep their Obamacare repeal promise that defeated her in 2010.

“President Donald Trump needs to take a step back from the Ryancare abyss and listen to those of us who supported him. This legislation must be retooled to rip all of Obamacare out by the roots, followed by a replacement bill that respects the American people and the Constitution by returning authority over health care to the states.”