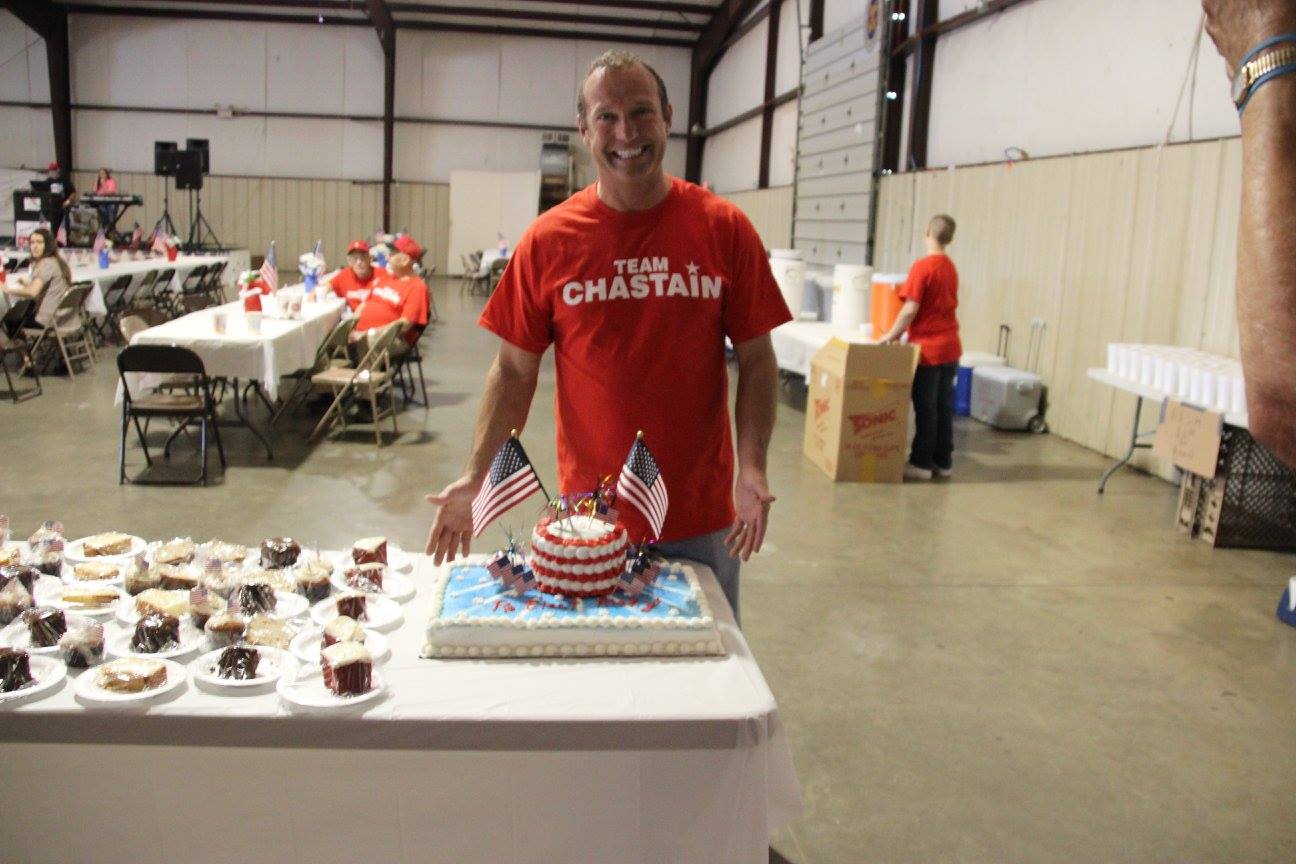 RICKY CHASTAIN IS MELTING DOWN …

To be clear: We don’t care who becomes the next sheriff of Laurens County, South Carolina.

As far as we’re concerned, law enforcement in this particular area of the Palmetto State is a lost cause.  The only hope for local residents?  Drinking heavily.  And arming themselves to the teeth.

(Which could be a fun combination when you think about it).

Anyway, back in the spring we laid out the saga of “sexting sheriff” Ricky Chastain – the current sheriff of Laurens County.

We busted Chastain exchanging more than 6,600 messages (including hundreds of explicit images) with an employee at a nearby sex shop.

These racy, emoji-laden exchanges – many of which occurred while Chastain was supposed to be “protecting and serving” – also alluded to numerous “Snapchat” exchanges between the sheriff and his rumored lover.

We honestly didn’t think the scandal was going to hurt the sheriff politically.  After all, this is a guy who was busted years ago impregnating a co-worker and driving her to Charlotte, N.C. for an abortion (in his patrol car, no less).  He then relied on county taxpayers to subsidize an extended “recovery period” for his lover.

Despite all of that, Chastain won reelection in 2012.

Not this time, though.  In June, Chastain was defeated in a “Republican” primary for Laurens County sheriff by Donald E. Reynolds – a guy with a bit of a shady background of his own.

Has Chastain’s defeat “slowed his roll?”

According to local sources, the soon-to-be ex-sheriff has been dialing up the crazy in recent weeks – throwing himself with a vengeance into the November election that will ultimately determine who replaces him in office.

As part of his efforts, Chastain recently launched a jihad against the owner of a local muffler shop.  Apparently the man irked the sheriff when he filed a complaint against Stephane Williams – one of Chastain’s employees who is running against Reynolds this November as a petition candidate.

(The popular rumor around Laurens County is that Williams plans to offer Chastain a job in the event he is able to upset Reynolds on November 8).

Anyway, the shop owner – Don Hunter – lodged a complaint against Williams seeking to have him booted from the ballot on a technicality.

“This is a mockery,” he wrote on one of his multiple Facebook pages.  “I’ve been in politics a long time and law enforcement even longer and I’ve always tried to do right by all the people of Laurens County.”

Not those times, obviously …

Chastain isn’t just berating Hunter on social media, though, he’s seeking to hit him in his wallet – telling supporters to boycott the former’s establishment, Don’s Muffler and Brake. Chastain also vowed that Hunter’s business “will never get another county-owned vehicle to work on.”

Sources tell us Chastain has threatened several other local businesses, too – not to mention local law enforcement officers and politicians in the area whom he believes were “disloyal” to him.  Basically, anybody who is supporting his former opponent appears to have landed on his radar. In fact Chastain recently lashed out at U.S. Rep. Jeff Duncan and other elected officials for agreeing to attend a September 19 event alongside Reynolds.

“I am through with anybody that goes to this event,” he wrote.

He’s also called on his supporters to vote against Duncan in future elections.

“It’s getting out of control,” one Laurens resident told us.

Chastain has at least three Facebook pages – all of them on full blast playing the blame game.

“He’s laying blame at everyone but himself for his loss,” one source told us.  “He said his own family ‘let him down,’ his supporters didn’t donate enough, his employees didn’t give him a solid record to run on, and his opponent ‘kept lying’ about him having affairs. He even claimed in one post to ‘have always been truly faithful’ to his wife.”

Rumors are abounding that 2 neighboring sheriffs have been placed “on standby” in case Chastain tries something really outrageous, and has to be removed because of mental instability. Everyone in Laurens is talking about this TOTAL MELTDOWN by Chastain.

Obviously, Chastain is well within his right to campaign against Reynolds – and to support the candidacy of his employee, Williams.  State law forbids him from using taxpayer resources to engage in political advocacy, but if he wants to spend his own time weighing in on the upcoming election – that’s his business.

However, it sounds as though Chastain’s advocacy is blurring some ethical lines – not to mention stretching the limits of sanity.