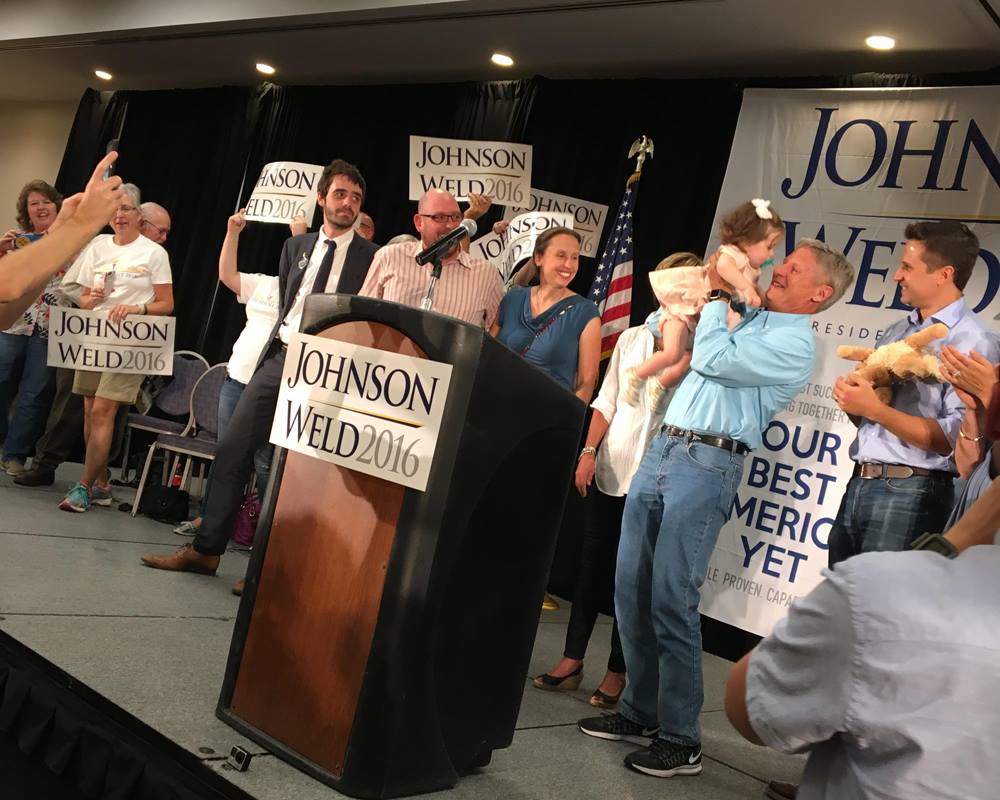 LIBERTARIAN NOMINEE HAS VEERED WILDLY TO THE LEFT …

Earlier this year, we endorsed – albeit with some reservations – the primary bid of eventual GOP presidential nominee Donald Trump.

The central theme of these three endorsements?  A rebuke of the “Republican” establishment in Washington, D.C., which as we have consistently pointed out is virtually indistinguishable from the party (and president) it claims to oppose.

As we noted in our primary nod for Trump, “this endorsement isn’t necessarily about backing a particular candidate, because let’s be honest: Presidential elections are bigger than that.  This endorsement is about lending our assent to a real movement – a purifying conflagration whose righteous indignation is rooted in a real struggle, one South Carolinians know far better than most in this country.”

In other words, we’ve been looking for candidates willing to expose the GOP for what it is – namely the other party of unsustainably big, oppressively invasive government.

Paul, Johnson and Trump – despite all of their ideological differences – have been adept at doing just that.  In fact, they have also found common ground on certain important issues – like championing a policy of non-interventionism in certain areas of the world where America truly has no business picking multi-trillion dollar fights.

Anyway … when the 2016 election cycle began several years ago, we presumed we would wind up backing U.S. Rand Paul in the GOP primary race and Johnson (again) in the general election.

It hasn’t shaken out that way, though.

Rather than pick up his father’s principled independence, Paul decided to try and become a member of the GOP establishment he used to rail against … with disastrous consequences.  Meanwhile Johnson has veered wildly to the left in a bid to capitalize on his newfound popularity.

(When we backed Johnson’s presidential bid four years ago, he was polling at one percent nationally.  Today, he’s polling at around nine percent, according to the latest aggregate data from Real Clear Politics).

We knew Johnson has become a vocal proponent of abortion-on-demand, a view we find to be wholly incompatible with true libertarianism.  Seriously … if you can’t secure the right to life, what’s the point of the other liberties?

As big a deal as this was for us, we were willing to overlook it because we thought Johnson’s record on a host of other issues would be too good to ignore.

Recently, we learned that Johnson is the only major candidate in the 2016 field who has pledged to sign U.S. president Barack Obama‘s proposed Pacific Rim trade deal.  As we’ve repeatedly and meticulously documented, this deal would be absolutely terrible for our economy.

Seriously: How on earth can Johnson – who loves to mock the pro-establishment positions of the two major parties – be the only candidate supporting the mother of all special interest trade deals?

This week, we lost all hope for Johnson’s candidacy when he announced his support for a so-called “free market” carbon fee to combat global warming.

The Libertarian nominee’s proposal – which he later insisted would be “revenue neutral” – was mocked by the libertarian Mises Institute.

“While it’s nice of Gary Johnson to not want to grow the government coffers with a carbon tax, unfortunately that detail doesn’t make this proposal any less concerning, nor any more ‘free-market,'” the group noted.  “It is impossible for a president or legislature to impose a ‘free-market’ tax (or fee) on anything. Considering the explicit goal here would be an attempt to try to use government tax collectors to alter the behavior of carbon-dioxide emitters, it’s difficult to see this as anything but government intervention.”

Gary Johnson received our endorsement in 2012 because we believed he represented a credible alternative to the “two-party” status quo in Washington, D.C.  Unfortunately, this election cycle it’s looking increasingly like he’s part of the problem.  Johnson’s support for abortion-on-demand, crony capitalist trade deals and massive energy tax hikes renders him totally un-endorsable.

Not to mention totally anti-libertarian …