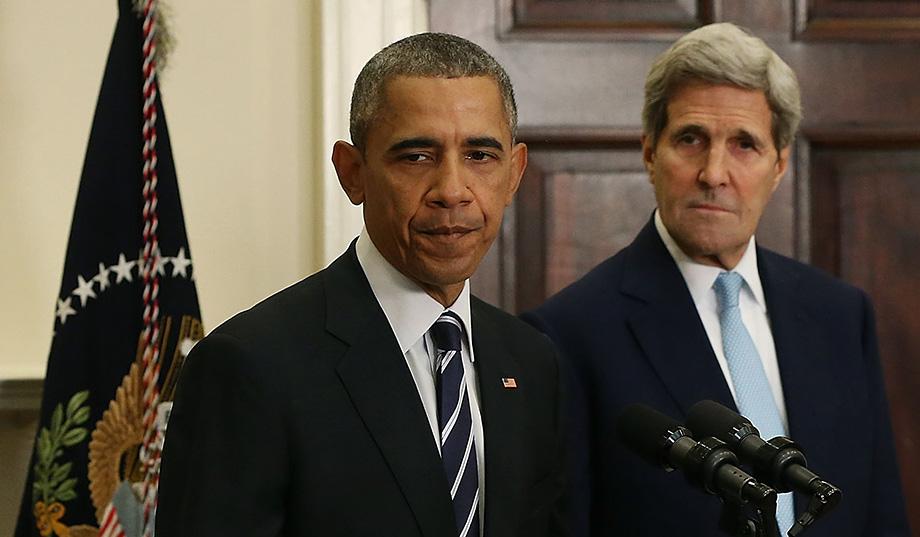 U.S. president Barack Obama has previously denied that his administration engaged in a “cash-for-hostages” deal with the government of Iran.  Democratic presidential nominee Hillary Clinton has backed him up, too – saying America’s $1.7 billion bribe to the Islamic regime “had nothing to do with any kind of hostage swap.”

The U.S. State Department – which Clinton “ran” from 2009-13 – is now flatly contradicting those claims.

According to spokesman John Kirby, the agency deliberately withheld the first $400 million payment on the bribe – which was delivered via a secret, taxpayer-subsidized airlift – until American hostages had been safely placed on a plane and were out of Iranian airspace.

That news broke earlier this week in The Wall Street Journal – which described a “tightly-scripted exchange specifically timed to the release of several American prisoners held in Iran.”

“We deliberately leveraged that moment to finalize these outstanding issues nearly simultaneously,” Kirby told reporters this week. “With concerns that Iran may renege on the prisoner release, given unnecessary delays regarding persons in Iran who could not be located as well as, to be quite honest, mutual mistrust between Iran and the United States, we of course sought to retain maximum leverage until after American citizens were released. That was our top priority.”

So in other words, America negotiated with terrorists. And secretly paid cash for hostages.

Oh … and Obama and Clinton both lied about it.

GOP presidential nominee Donald Trump – who is in the midst of recalibrating his candidacy – seized upon the news.

“He denied it was for the hostages, but it was,” Trump said. “He said we don’t pay ransom, but he did.  He lied about the hostages – openly and blatantly – just like he lied about Obamacare.”

Damn … that’s a nice segue to Obama’s socialized medicine plan, which happens to be falling apart at the seams at the moment.

In both cases, Trump is correct.  But the lie about Iran that has the potential to do some serious damage to Obama – and to Clinton.

Not only did America clearly conduct a cash-for-hostages deal, but Obama’s administration (and Clinton’s campaign) attempted to mislead the public about what really happened.

We wonder … was this deception coordinated?

Obama’s “cash-for-hostages” deal was cut in the aftermath of Obama’s widely-criticized nuclear agreement with Iran – which allowed the radical Islamic nation’s nuclear program to move forward and unfroze approximately $150 billion in assets.

That deal also resulted in a big payday for one of Clinton’s top corporate allies – Boeing.

This website has never breathed fire when it comes to Iran’s nuclear program, but the process by which the Obama administration’s nuclear deal cleared the U.S. Congress was highly suspicious.

With “Republicans” controlling both the U.S. House and the U.S. Senate, Obama’s deal with Iran should have easily gone down in defeat.

Thanks to a bill by U.S. Senator (and Obama golfing buddy) Bob Corker, though, this guaranteed defeat became a guaranteed victory.

Corker’s bill effectively reclassified Obama’s deal as normal legislation instead of treaty –and guaranteed that it would go into effect unless Congress explicitly rejected it.  As a result, Obama only needed to secure 41 votes (the total necessary to sustain a filibuster) as opposed to the 67 votes he would need to pass a treaty.

Astoundingly, Corker’s reclassification bill passed the U.S. Congress with only one dissenting vote.

Whatever you think of Obama’s Iran nuclear deal, though, this “cash-for-hostages” scandal is despicable.  Same with the efforts to conceal it from the public – and cover it up after the truth began to seep out.

America cannot afford to purchase the release of hostages – and even if we could, such a policy is only going to incentivize terrorists (and the governments that support them) to take more hostages.

Sadly, it appears as though such elementary economics is foreign to the liberal community organizer currently occupying the White House.

Hillary Clinton’s Perjury: Watch It For Yourself