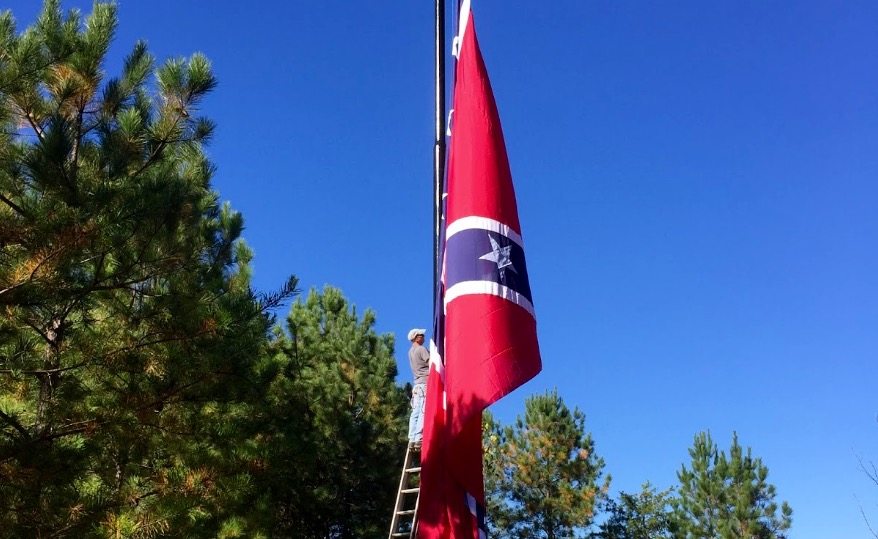 The project – modeled after a successful flag-raising campaign in Virginia – aims to hoist multiple large flags (as big as thirty-by-fifty feet) atop 100-foot flag poles.

These poles would be placed on private property overlooking highly-trafficked thoroughfares.

“We’re advertising that if people are willing to lease us the land, we will erect the pole and flag and take care of all maintenance,” party leader James Bessenger told us.

Bessenger’s group is being supported in its efforts by the “Virginia Flaggers,” which has raised more than two dozen large Confederate banners along highways in Virginia.  In fact the leader of this group – Susan Hathaway – has agreed to mentor Bessenger’s organization.

“We are scouting land in the Upstate this week,” Bessenger told us. “(We) have already received offers in Florence and Dillon along Interstate 95, in Summerville along Interstate 26 and in Myrtle Beach.  It’ll take a while to scout the locations and get the money together but it’s in the works.  Fundraising has started.”

What, exactly, is Bessenger’s group “retaliating” against?

Easy: Last year’s decision by governor Nikki Haley and state lawmakers to remove the Confederate flag from the grounds of the S.C. State House.

Bessenger and Haley have sparred often in the aftermath of that decision – and we suspect “Operation Retaliation” will lead to fresh rhetorical skirmishes.

It’s pretty simple: We respect private property rights.  If people want to rent land along interstates or other highways to fly the Confederate flag, the Nazi flag or the black nationalist flag … we don’t really care.

That’s kind of up to them …