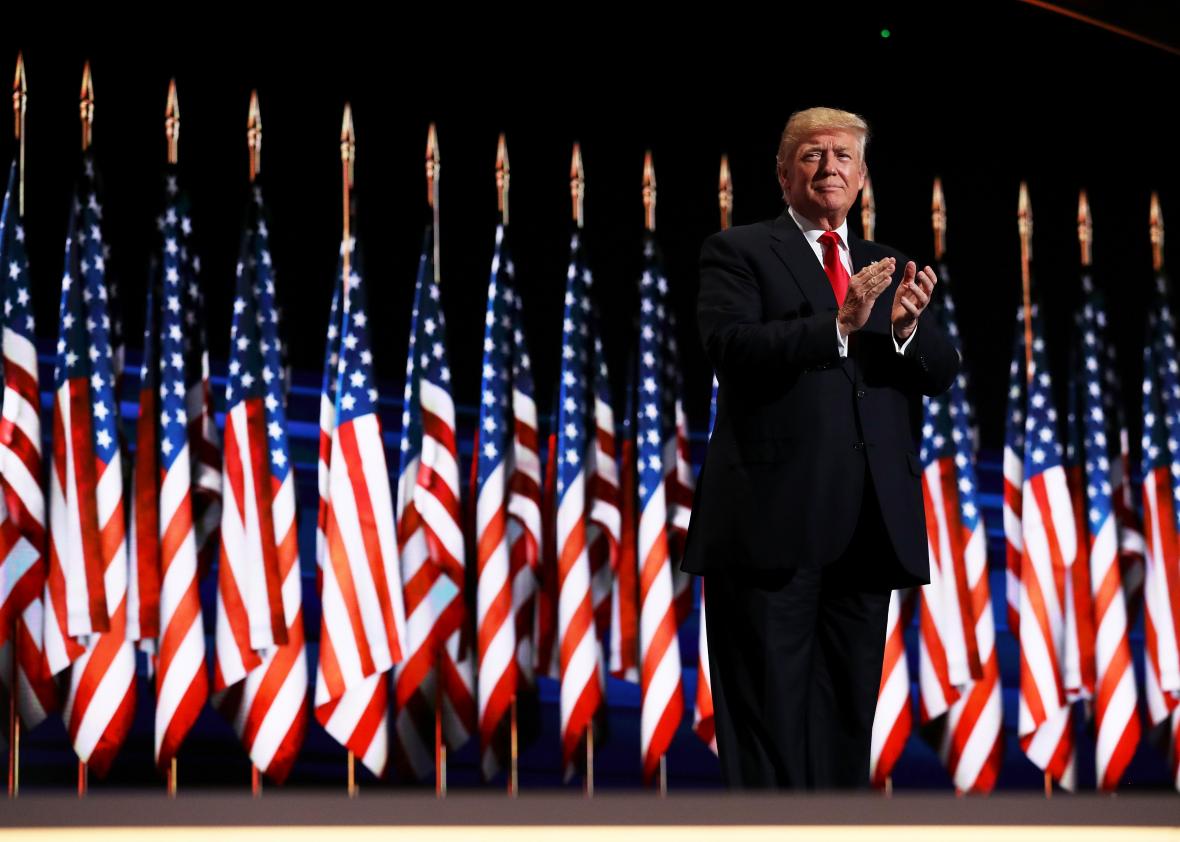 || By RICK MANNING || Donald Trump’s acceptance speech showed America two important things: That he is not the standard issue Republican candidate standing above the workers hoping they will vote for him, and that the GOP has unified behind his candidacy.

The ugly truth is that Republicans have lost the popular vote in five of the six past presidential elections, and have lost the Electoral College vote heavy rust belt states of Pennsylvania, Michigan and Wisconsin in all six of those general election tests.  That is twenty-four years of failure in states that have each had Republican governors and state legislatures in the past two years.

Trump’s heartfelt personal, job and national security message not only puts the rust belt in play, but resonates with all Americans who have seen their ability to make a living threatened or lost, watched dumbfounded as violence against the police has been seemingly accepted by our nation’s leaders, all the while being horrified by the terrorist attacks and beheadings that are seemingly the new normal under the Democrats, even as those same leaders attack every American’s constitutional freedoms and beliefs.

Trump speaks directly to these voters, who have found that the Democrat Party that many of them once felt represented them, has completely abandoned them.  In his speech, Donald Trump looked those voters in the eye and promised to be their voice.  A voice that will tell the truth rather than subtle lies couched as political correctness.  Trump promised to be a voice that will stand for them and against the corporate cronies who have fixed the system against them.  And he promised to be a voice for them by restoring common sense governance that encourages a safe environment for their families to thrive and their opportunities to grow.

Rather than run a failed wash, rinse, repeat campaign, Trump’s appeal to put America first in trade deals, restore law and order, enforce our borders and protect our national security demonstrates that he is going to fight for traditional blue collar, Democrat and Independent voters in the Great Lakes states and beyond against a corrupt opponent saddled with a globalist record that is despised by these voters.  The political brilliance of changing the electoral map from one where the GOP candidate had no margin for error to one where there are more big, battleground states in play automatically puts Hillary on the defensive in traditional Democrat strongholds like Pittsburgh, where it is Trump’s rhetoric that is much more familiar and popular.

Trump’s recognition that the rule of law must be restored through the appointment of Scalia-like Supreme Court Justices and that our tax and burdensome regulatory systems have hobbled the U.S. economy resulting in the hollowing out of America’s manufacturing sector and has hamstrung our energy sector to the detriment of workers.

Ironically, in a bygone era much of Trump’s rhetoric could have been delivered by a labor state Democrat, but today it is the GOP nominee who is speaking for the workers’ aspirations, while the Democrats have the ultimate corporatist insider candidate beset by her personal avarice and corruption as their standard bearer.

Trump is a political risk for the GOP, because some of his rhetoric diverges from the beaten path, but failure to attract a majority in five of the past six presidential elections proves the need to take that chance.  His speech demonstrates that he will speak to the positive aspirations of Americans who are tired of being taken for chumps by the politicians they send to D.C.  And not being a politician by trade, Trump’s rhetoric is believable, because it isn’t the empty words of a pandering senior citizen carrying hot sauce and playing Pokemon Go to appear to be cool, but rather the words of someone who is dedicated to restoring our nation’s economic and military strength.  A man who believes the words he says and seeks the office of the Presidency not for personal aggrandizement but to use his talents to help redirect a nation that has lost its way.

As a limited government advocate there were some areas of Trump’s speech that raised concerns, but when compared to Hillary Clinton’s anti-First, Second, Fifth and Tenth Constitutional amendment positions, it was clear that Republican Convention attendees had decided that any differences needed to be put aside to focus on beating Hillary Clinton.

The Republican Party has united around Donald Trump even as his acceptance speech was an open invitation to Independent and Democrat voters to join him in his fight to make America great again.  The next few months will determine if Obama’s policies will be cemented and expanded through both legislative and judicial appointments, or if America’s legacy of individual freedom will be protected and restored.  In Cleveland, Donald Trump showed that he understands the enormity of the stakes.

The fight for America has been joined, and the battleground will be blue collar voters, a massive voting bloc that Hillary Clinton wishes would just go away.