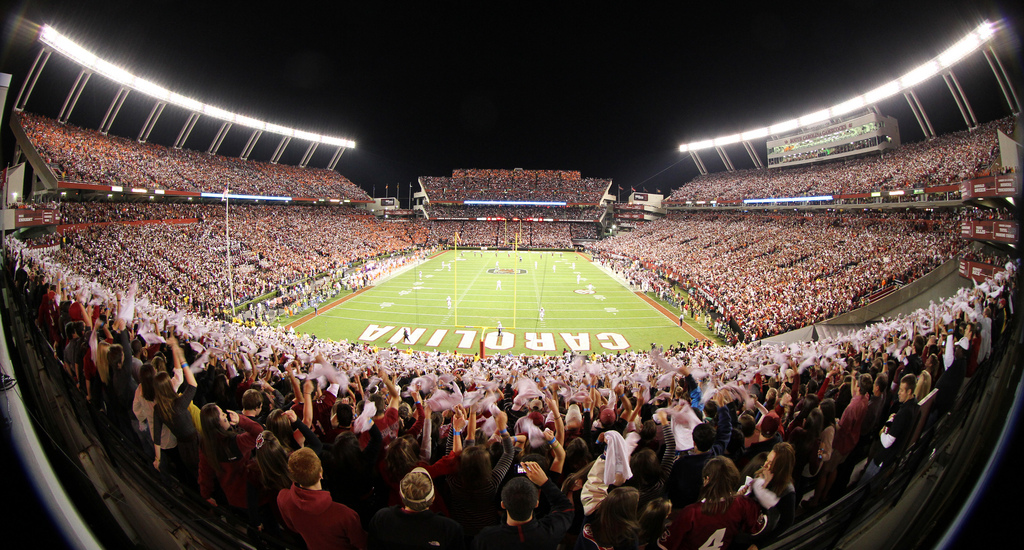 Fans attending athletic events at the University of South Carolina will be required to adhere to a new “clear bag policy” beginning next month.

Specifically, attendees at all ticketed South Carolina athletic events will be required to carry only “clear plastic, vinyl or PVC bags” of narrowly-specified dimensions.  Exceptions will be made for “small clutch bags”- i.e. bags that are “approximately the size of a hand” – and bags containing “medically necessary items.”

“In meetings with security personnel around the Midlands and with schools around the SEC, it has become evident that there is a new level of security measures that need to be implemented in our athletic venues,” school athletics director Ray Tanner said. “We feel that this new clear bag policy will assist our security personnel in making entrance into our venues a more efficient process while making game day safer for everyone.”

Officials with the S.C. State Law Enforcement Division (SLED) said there were “no specific threats” related to the new policy – which it described as “a proactive step to enhance public safety during these events.”

What do die-hard Gamecock fans think of the new rule?

“It’s silly,” one told us. “They already check bags. So now they won’t for ‘expedited entry?’ Doesn’t make much sense to me. I can tote whatever I want in the clear bag and hope security or other fans don’t notice as I stroll by?”

The “clear bag policy” also conveniently creates a new merchandising opportunity for the school – as the regulations specifically allow for approved logos to appear on one side of “approved bags.” Expect the school’s approved vendors to begin marketing to this newly-created niche immediately (assuming they haven’t already).

“Seems like the school wants us to buy their (merchandise),” one fan noted, adding that South Carolina should “come up with new rules and booster donation increases after the team wins some games.”

According to a news release from the school, the “clear bag policy” will go into effect for South Carolina’s August 18 home soccer game against Winthrop.

Obviously it will impact all seven of South Carolina’s home football games this year – beginning with the team’s home opener against East Carolina on September 17.

What do you think?  Is the “clear bag policy” a legitimate safety move?  Or is it a marketing scam?  And will it really expedite entry into athletic events, as officials claim?