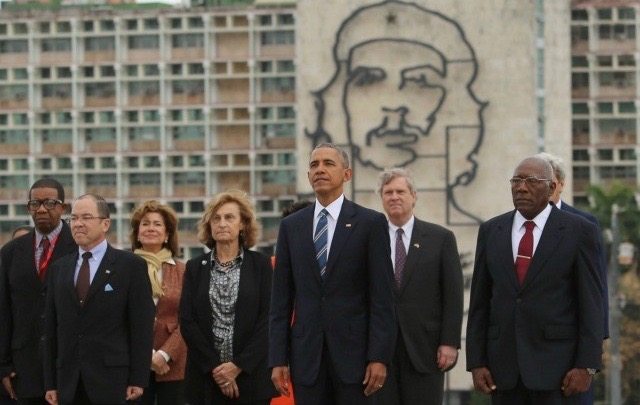 Who is Che Guevara? And why is a picture of U.S. president Barack Obama standing under his iconic image in on the island nation of Cuba causing such controversy?

First … Guevara.  To those on the right, he’s a murderous Marxist whose true legacy has been glossed over to conceal a wide range of atrocities.  To those on the left, he’s an anti-imperialist hero, a martyr murdered by CIA-backed forces in Bolivia following his starring role in the Cuban revolution.

In fact the famous (infamous?) photo of Guevara – popularized by bands like Rage Against The Machine – has become a symbol of modern counterculture.  Especially among “progressives.”

This is precisely the anti-establishment legacy Obama is seeking to capitalize upon (well, co-opt).  But there is another side to Guevara.  Several sides, actually.  It turns out he was an unapologetic racist (particularly toward blacks).  A homophobe.  A sadist.  And once he was in power, he was an oppressor and silencer of the very “progressives” now donning his shirts and raising their fists on college campuses across America.

Guevara explicitly embraced the sort of bloodthirsty radicalism we currently see manifested in the Islamic State in Iraq and Syria (ISIS).  And while this website has made abundantly clear its views regarding the counterproductive role American interventionism has played in the rise of ISIS, there is no sugarcoating the intrinsically evil modus operandi of the current caliphate.

Guevara?  He might as well have written their playbook …

“Hatred is the central element of our struggle! Hatred that is intransigent … hatred so violent that it propels a human being beyond his natural limitations, making him violent and cold- blooded killing machine,” Guevara said in 1966, one year before his death.  “We reject any peaceful approach.  Violence is inevitable.  To establish Socialism rivers of blood must flow!  The imperialist enemy must feel like a hunted animal wherever he moves.  Thus we’ll destroy him!  These hyenas are fit only for extermination.  We must keep our hatred alive and fan it to paroxysm! The victory of Socialism is well worth millions of atomic victims!”

Curious how Obama would chose to embrace this legacy on the same day dozens were killed by the latest militant Islamic attack, isn’t it?

We spoke this week to U.S. Rep. Jeff Duncan about Obama’s visit to Cuba and embrace of Guevara’s legacy.  Duncan represents South Carolina’s third congressional district.  More relevant to the matters under discussion here, he is the chairman of the U.S. House foreign affairs subcommittee on the Western Hemisphere.

“The photo of President Obama standing in front of mass murderer Che Guevara is disturbing at best,” Duncan said. “Che was a communist revolutionary who, as warden over Castro’s political prison in the aftermath of the Cuban revolution, was responsible for setting up the firing squad which killed hundreds of political prisoners, many of which never had a trial.”

Lack of due process … another chink in the iconic counterculture armor, right?

It’s also worth noting current Cuban president Raúl Castro was part of those firing squads, too … 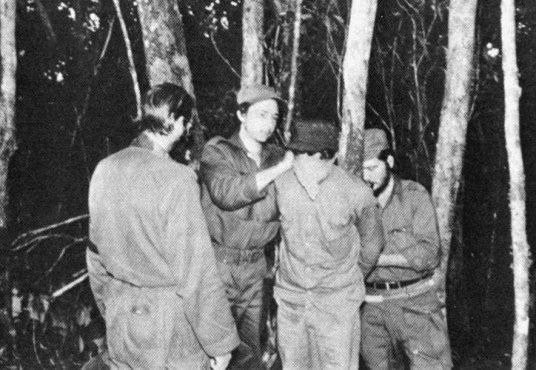 Not only that, Guevara reportedly targeted blacks disproportionately in his mass killings – which would have been consistent with his racist world view.

“We’re going to do for blacks exactly what blacks did for the revolution. By which I mean: nothing,” Guevara once wrote. “The Negro is indolent and lazy, and spends his money on frivolities, whereas the European is forward-looking, organized and intelligent.”

Again … does that sound like a counterculture hero to you?

Guevara modified his views on blacks later in his life – à la George Wallace or Strom Thurmond – but don’t expect to see Obama posing in front of iconic images of those two segregationist southern politicians.

“This mass murderer has become an icon for the extreme left around the world,” Duncan said.  “The disconnect between the real Che Guevara and the one portrayed by the left is exacerbated by President Obama standing before the iconic image for the whole world to see … almost like it was planned by Barack Obama to send a message about himself, his ideals or how he sees himself.”

Contrasting Duncan’s views?  Those of U.S. Rep. Mark Sanford – who stood alongside Obama in Cuba.  In fact Sanford used his longstanding support for the Castro regime recently as an excuse not to join a group of lawmakers eager to reestablish congressional authority over the budget process in Washington, D.C.

Ridiculous right?  Indeed … especially since the provisions Sanford reportedly objected to were narrowly drawn so as to prevent U.S. taxpayers from subsidizing Cuba’s military or intelligence agencies and to keep the Castro regime from profiting off of properties it seized.

What possible objection could Sanford have to such caveats?

This website has generally favored Sanford’s anti-isolationist views toward Cuba – and we have expressly rebuked the taxpayer subsidization of efforts to meddle in Cuba’s internal affairs.

But this isn’t about normalizing relations.  Or reestablishment mutually beneficial economic relations (to the extent government can be trusted to do that).  No.  This is an attempt to sanitize history at the expense of the truth – not to mention a shameless effort to gloss over the Obama administration’s utter failure to accomplish anything of significance in this process either for his own people or for the Cubans.

Freedom to assemble? No.

Freedom of religion? No.

More involvement in self-governance? No

Retention of more of their wages? No

Over 2,000 Cubans have been imprisoned just since January, with many imprisoned just days prior to President Obama’s historic visit, including a Baptist pastor and his family who had spoken to my Western Hemisphere Subcommittee just this year about Cuban oppression.

When human rights issues came up during the press conference with Castro and Obama, Raúl Castro said that it was improper to ask him about political prisoners and only touted Cuban education and healthcare as “human rights” positives.

In other words, this is much bigger than the reckless embrace of a murderous socialist thug  … it’s about a nation (our nation) accommodating the perpetuation of his views on the subjugation of individual freedom and free markets.

“As libertarians and conservatives we should want to have limited government – to allow market forces to work in effecting change,” Duncan said.  “But we should recognize the plight of the Cuban people and work tirelessly to stand up for THEIR liberties.  And when governments do get involved, as the Obama administration has done, we should strive to include concessions for the oppressed in order to help them obtain some of the liberties which we take for granted.”

To be clear: It is not America’s place to decide what transpires in Cuba.  That is for the Cubans to decide.  But Obama’s “intervention” on this island – in defense of Guevara and in support of his enduring legacy of repression –  is indeed disappointing on multiple levels.

Not only that – it’s demonstrably hypocritical, self-loathing and indicative of the further erosion of our nation’s moral authority to lead.